In this blog post, we will show how to integrate and automate network connectivity testing as part of AWS infrastructure deployment. We will show you how to use a new solution, Infrastructure as Code (IaC) Network Tester, to perform connectivity testing between a source resource and a destination resource in Virtual Private Cloud (VPC). It supports testing resources deployed via AWS Management Console, SDK, Command Line Interface (CLI) or via a CI/CD pipeline.

When you define your infrastructure template, you have full control over your virtual network environment. You choose your own IP address range, create subnets, configure route tables and gateways. You also add multiple layers of security, such as security groups and network access control lists (NACLs), to control access to entities of each subnet by protocol, IP address, and port number.

One of the challenges customers face is implementing the minimum set of configurations to allow traffic to flow through network paths as intended. As your infrastructure grows, it is common for these templates to have thousands of lines of code. With the growth of complexity, it is not unusual to have unintended configuration that could lead to network paths that are not reachable or establish new network paths which are not intended.

In re:Invent 2020, AWS launched the VPC Reachability Analyzer. This is a configuration analysis tool that enables you to perform connectivity testing between a source and destination resource in a VPC. By integrating the VPC Reachability Analyzer with infrastructure deployment, you can troubleshoot connectivity issues caused by misconfiguration, and when integrated into a continuous integration and continuous (CI/CD) pipeline, you can proactively verify during the testing phases that your configuration matches your network connectivity intent.

Overview of the IaC Network Tester

The IaC Network Tester is a state machine powered by AWS Step Functions that helps you run network testing against a set of source and destination resources to ensure configuration matches intent. Figure 1.0 below shows a high-level overview of the tester.

Infrastructure created using any infrastructure as code tool will need to output a JSON formatted string specifying the source, destination and tag for each of the route to be tested. For stacks deployed via AWS Console, SDK or CLI, the tester takes that output value of the stack as its input and then runs post infrastructure deployment to validate the network paths created in your topology. If the infrastructure is deployed via a CI/CD pipeline, the tester can be integrated into the testing phase of the pipeline prior to deploying to production.

The IaC Network Tester executes the network path testing by running a step function that carries out the following steps:

The output from the state machine indicates which routes are reachable, which are unreachable and reason for unreachable routes. For infrastructure deployed via Console, SDK or CLI, the results of these tests help you to correct the configuration issues and redeploy the stack. For infrastructure deployed via CI/CD pipeline, this result can be used to ensure the configuration matches intent and if not fail the pipeline and prevent deploying into production.

To demonstrate the IaC Network Tester, we will deploy a sample infrastructure consisting of a multi-VPC architecture with VPC peering. In this architecture a shared VPC is used to provide Active Directory Services to a Remote Desktop Service VPC and Business Application VPC as shown in Figure 1.1 below. These two VPCs contain a public subnet that provide users access to the services via the Internet. To authenticate, authorize and manage users, the VPCs are connected to the Active Directory Service VPC via a peering connection. The security group of the servers within each VPC is configured as follows: 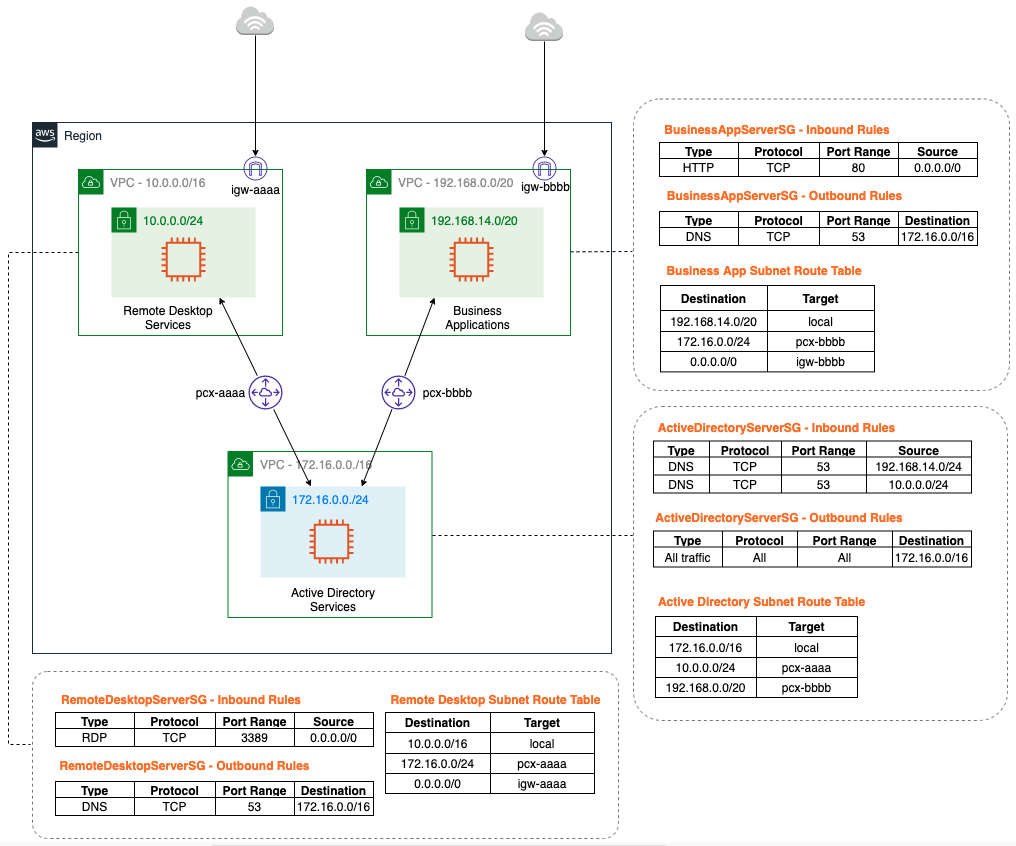 As part of deployment of this infrastructure to your AWS Account, the IaC Network Tester can be used to validate that these configurations match intent. Some of the network paths in this architecture which can be tested are given below:

Network Paths which are intended to be reachable:

Network Paths which are intended NOT to be reachable:

The steps required to use the solution for these two scenarios include:

From your AWS CloudShell terminal (you could, optionally, set up your local machine to do this by installing the SAM CLI), clone the IaC Network Tester repository using the following example commands below:

The “sam deploy —guided” command prompts you to specify a number of parameters to deploy the SAM application. You can select the defaults by pressing the “Enter” button for each prompt as show figure 1.2 below.

On successful completion of that command, you see the output similar to what is shown in figure 1.3.  Note the value of the key IaCNetworkTesterStateMachineArn. This is the Amazon Resource Name (ARN) of the IaC Network Tester state machine.

Step 2: Deploy the CloudFormation template for the sample infrastructure

This solution provides sample CloudFormation template sample-stack-multi-vpc.yml for creating the network infrastructure shown in figure 1.1. The sample CloudFormation template is located in the folder sample_resources within the cloned repository. To enable the IaC Network Tester to test network resources deployed by the CloudFormation stack, the routes to be tested will have to be specified as one of the outputs of the stack. In the sample stack provided, find below the stack output “NetworkReachabilityTestPaths” which specifies the routes to be tested.

This is a JSON formatted array that specifies the routes to test with each item on the array containing the following keys:

To use the solution with your infrastructure template, follow a similar format for the output and modify the JSON to contain the routes within your stack for testing. Create the sample infrastructure shown in figure 1.1 above by deploying the CloudFormation template using the following example command.

On successfully deployment of the sample stack, initiate the IaC Network Tester state machine by starting a new execution using the command below, providing values for the parameters.

The <state_machine_arn> parameter is the value from Step 1 above. The input to the state machine consists of:

Note the executionArn returned after running the command as shown in figure 1.4 below

A sample output from the IaC Network Tester state machine is shown in figure 1.5 below. It is a JSON formatted string that shows the tests that succeeded, timed out (if the analysis did not complete within the configured time) or failed. If some tests timed out, the test can be rerun with an increased “analysisDuration” or “analysisWaitCount” to give the test more time to complete. The results provide following information for each route tested. 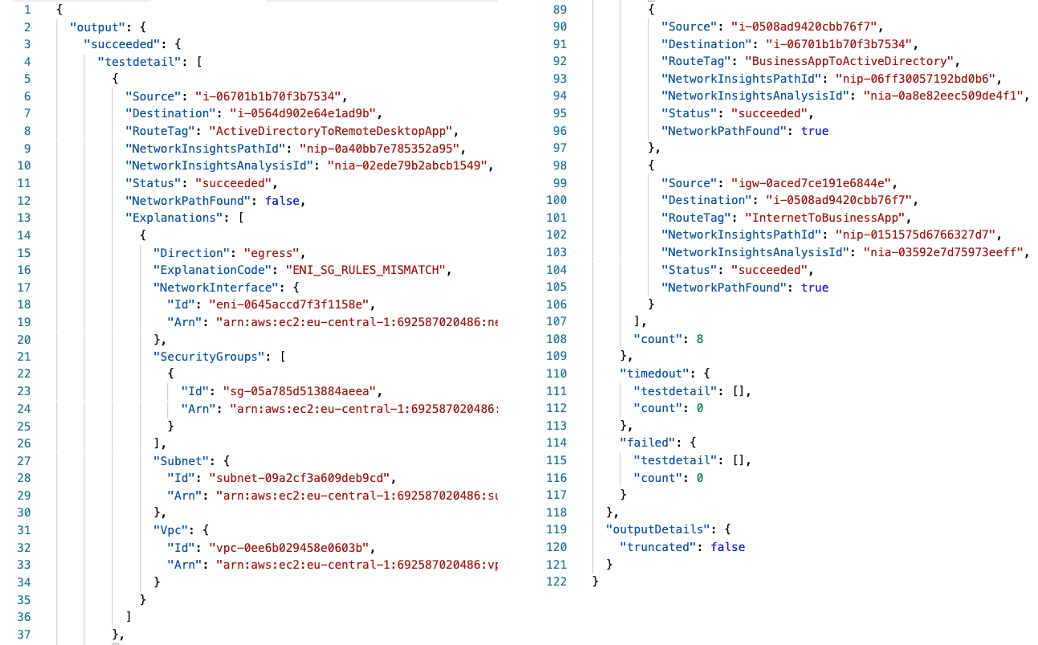 For each route tested, the results show the Source, Destination and the RouteTag which were specified in the input. Apart from these, additional parameters such as NetworkInsightsPathId, NetworkInsightsAnalysisId, are identifiers of internal analysis objects created. NetworkPathFound and Explanations are details from the VPC Reachability Analysis of each route. NetworkPathFound indicates if the route is reachable and if not the Explanations field provides details of why the route is not reachable. For more details about these two fields refer to the documentation. The architecture diagram of the sample infrastructure in figure 1.6 below shows the eight routes tested and the routes that are reachable (in green) and NOT reachable (in red) which validates that the configuration matches intent. 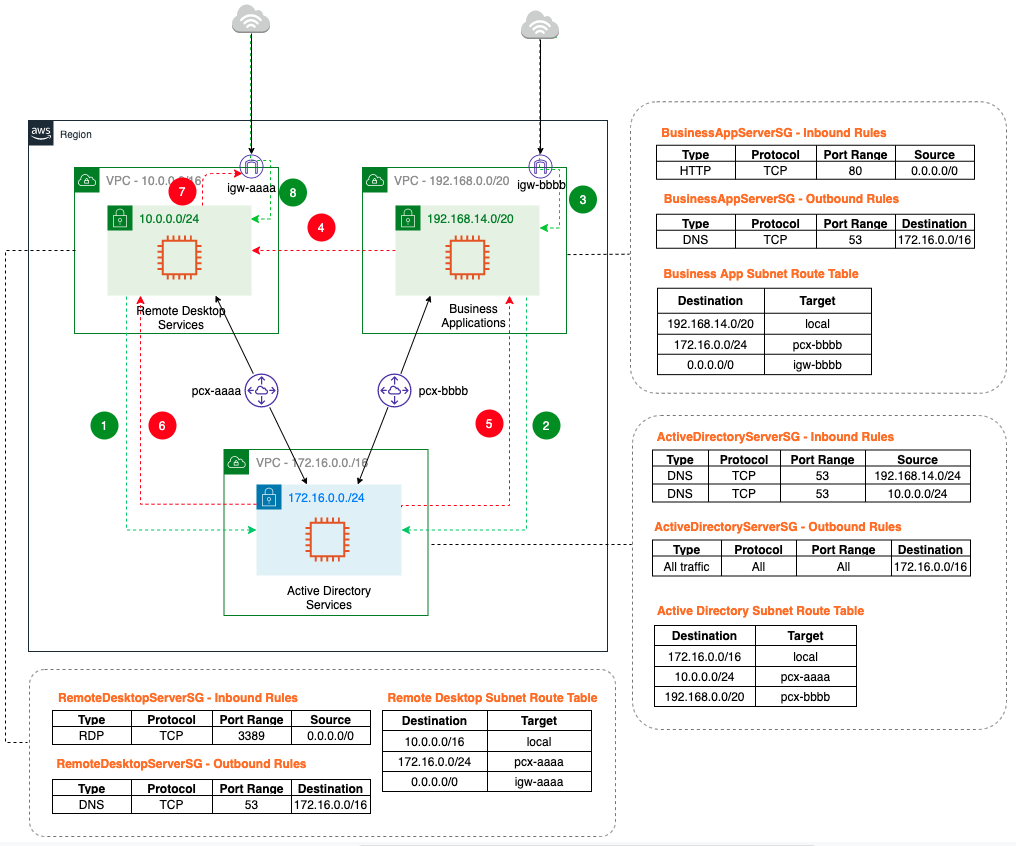 Figure 1.6: Sample infrastructure showing the five routes tested and the routes that are Reachable and NOT Reachable. 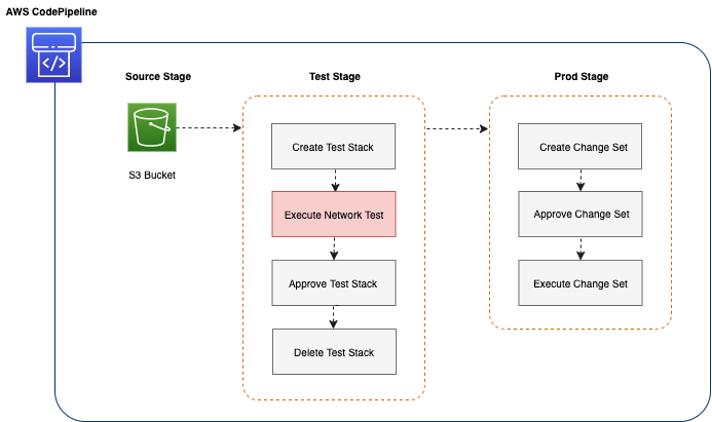 Follow the instruction in Step 1 of Scenario 1 to deploy the IaC Network Tester on your AWS account. Note the execution_arn of the step function returned after deploying the IaC Network Tester application. Note: You will need to delete the sample stack created in Scenario 1 above if the quota for number of VPCs in the region you are working on is the default value of 5. The CI/CD pipeline will create the same sample infrastructure which will fail if the number of VPCs exceeds 5.

Step 2: Deploy the CloudFormation template for the sample CI/CD pipeline

To create the sample pipeline, deploy the CloudFormation template using the following command below, replacing the parameters:

Step 3: Upload a zip file containing the CloudFormation template of the sample infrastructure to the source S3 bucket

The sample CI/CD pipeline is configured to use S3 as the source artifact however IaC Network Tester can be used with other sources supported by AWS CodePipeline. To configure the source details for the pipeline, the sample-pipeline.yml contains following parameters:

The sample-pipeline.yml also creates the S3 bucket that will contain the source artefacts with the name format “${AccountID}-iac-nt-bucket”. To use a different naming format, update the “SourceBucket” resource within the cloudformation template. Use the sample command below to create a zip file containing the sample stack template file and upload the file to the S3 bucket.

Step 4: Trigger the pipeline which will invoke the IaC Network Tester state machine during the network testing stage

You can navigate to the AWS CodePipeline console to visualise the pipeline execution as shown in Figure 1.8 below. The pipeline retrieves the sample stack template from the S3 bucket within the S3Source stage and then moves to the TestStage. Within the TestStage, the pipeline creates the test stack in the CreateStack phase and then moves to the ExecuteNetworkTest phase where it invokes the IaC Network Tester. If this completes successfully, the pipeline then moves to the ApproveTestStack phase where the admin can review the output from the step function and ensure that configuration matches intent. This verification process can also be automated by invoking a AWS Lambda function to analyse the test results and if configuration matches intent the pipeline can continue to the next phase, otherwise the pipeline will fail. 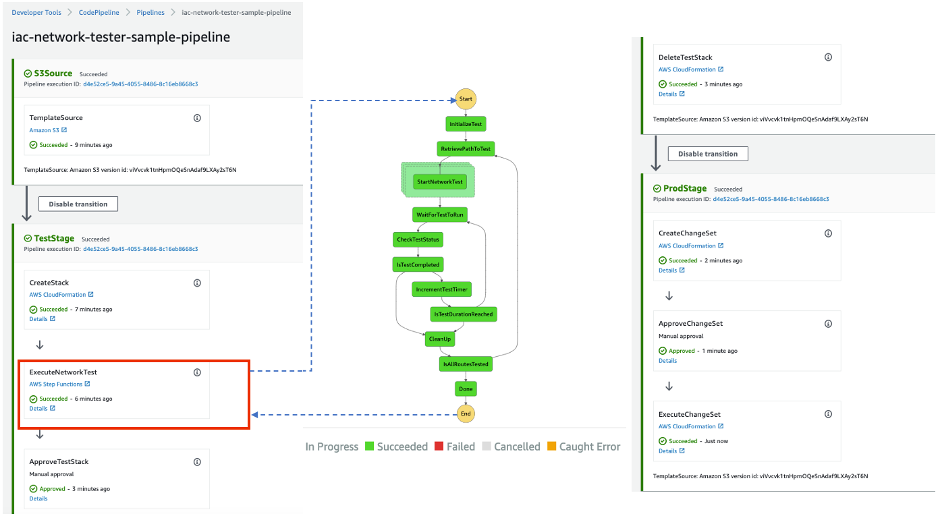 There are three main costs associated with IaC Network Tester which will only be incurred when the step function is invoked. The AWS pricing below will be based on the North Virginia region:

Leaving resources that you don’t need running on your AWS account will incur changes. Follow the instructions below to clean up the resources created in this post and avoid incurring further charges.

In this blog post, we have covered how you can identify network misconfiguration in your infrastructure deployed using Infrastructure as Code tools. While the examples in this blog used IaC Network Tester with Infrastructure deployed through CloudFormation and AWS Code Pipeline, the same approach can be incorporated in other IaC tools or CI/CD tools to automate the network testing. This will help ensure that network configurations in a VPC match intent and any misconfiguration can be identified prior to deploying to production. You can read more about VPC Reachability Analyzer and the resources that are currently supported as the source and destination. We welcome your feedback and if you have any improvements, new feature requests or bugs kindly raise them via the issues tab on GitHub. Happy Testing!

Ozioma is a Solutions Architect at Amazon Web Services. In his role, he helps customers of all sizes to transform and modernise on AWS cloud platform. Prior to joining AWS, Ozioma worked with an AWS Advanced Consulting Partner as the Lead Architect for the AWS Practice. He is passionate about software development with a keen interest in building modern applications using serverless technologies.