On February 9, a new object successfully began to orbit Mars: an uncrewed spacecraft called the Hope Probe. The mission has already returned the first image of Mars, taken by Hope’s Emirates eXploration Imager from an altitude of 24,700 km. 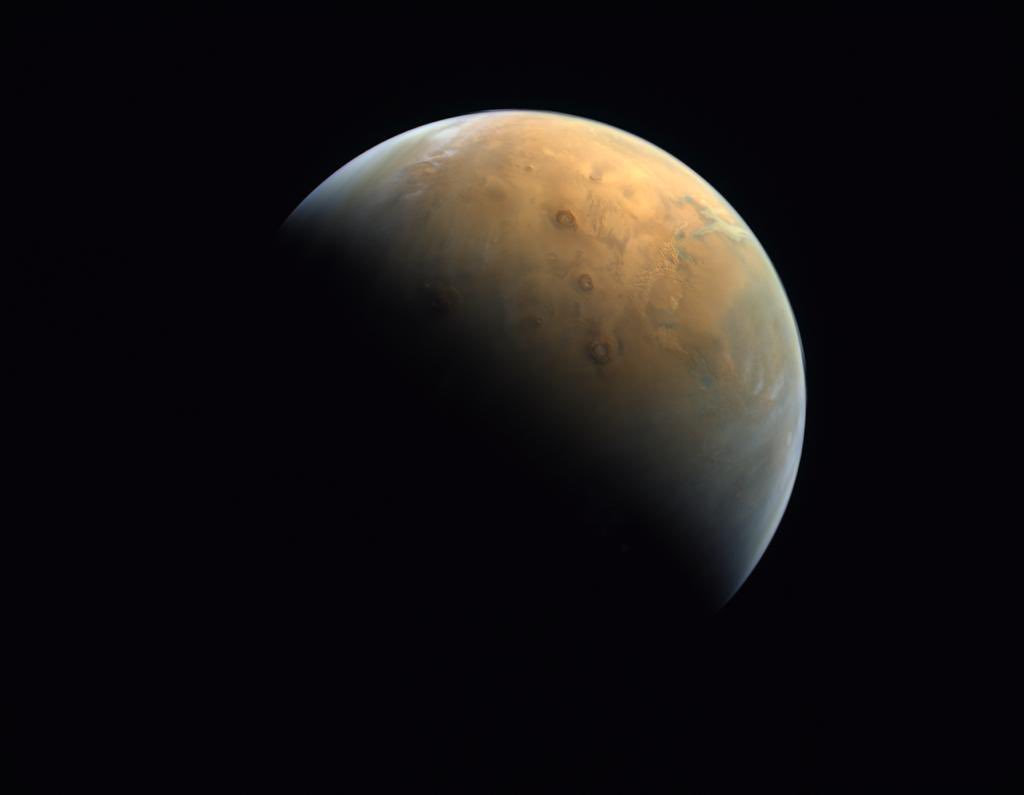 Led by the Mohammed Bin Rashid Space Centre (MBRSC), the Hope Probe is the first interplanetary mission for the United Arab Emirates (UAE), the fifth country in history to reach the red planet. It will also be the first spacecraft to capture a complete picture of the Martian atmosphere and its layers during different times of the day and different seasons for one complete Martian year. Once data transmitted by the Hope Probe reaches the scientific teams on Earth, MBRSC will use Amazon Web Services (AWS) advanced technologies to process and analyze the vast amounts of data and imagery to help researchers better understand the Martian atmosphere and its layers.

Following a successful Mars Orbit Insertion (MOI), the next stage in the Hope Probe’s journey is the transition from the Capture Orbit to an acceptable Science Orbit in preparation for its primary science operations. 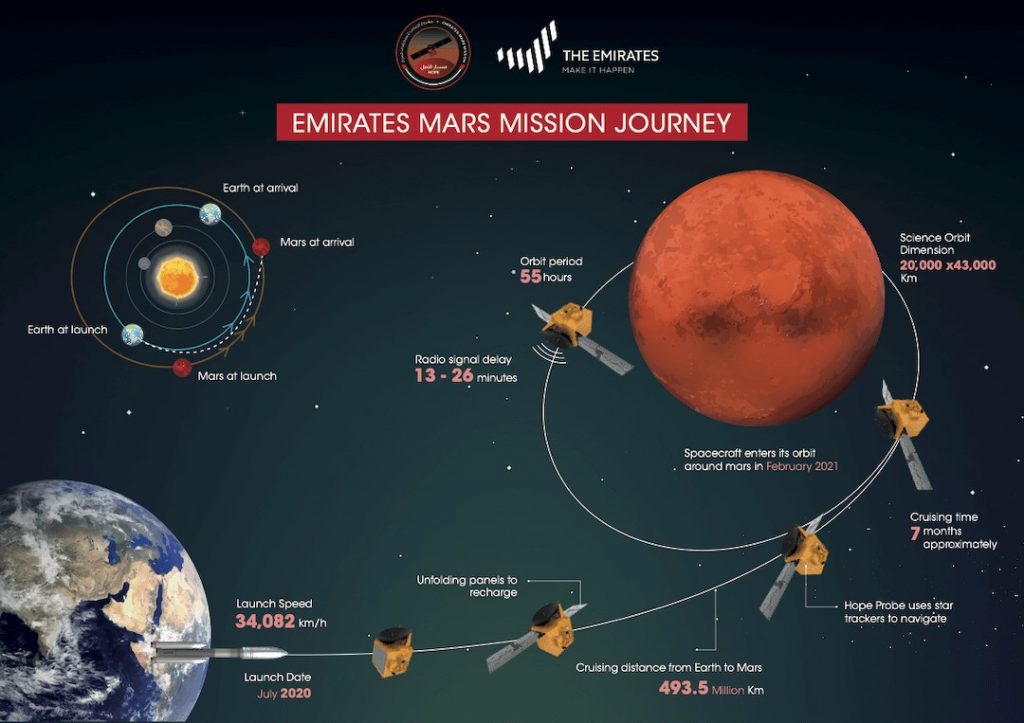 Over the next two years, the probe’s primary scientific mission is to study daily and seasonal weather cycles, weather events in the lower atmosphere such as dust storms, and variations in weather in different regions of Mars. It will help scientists attempt to answer questions about why Mars’ atmosphere is losing hydrogen and oxygen into space and the reason behind Mars’ drastic climate changes.

Scientific instruments mounted on one side of the spacecraft will collect information about atmospheric circulation and capture aerial images of Mars using the visible, thermal infrared and ultraviolet wavelengths. The three instruments are:

MBRSC will use a customized suite of AWS services to host the mission science data center that is responsible for processing the large volumes of data collected by these instruments on the Hope Probe and to convert raw instruments’ products into higher level scientific products that will help scientists to perform their analysis and research. 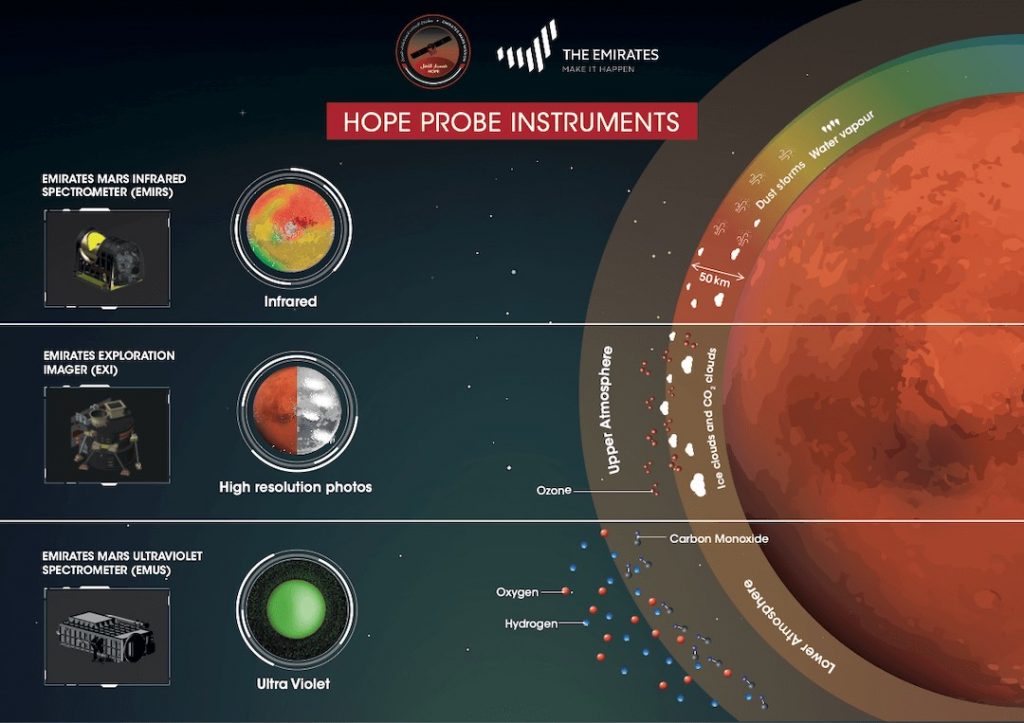 Powering the data journey: From Mars to the scientific community in 20 minutes

What makes this mission different from others is that it is fully automated. This means that the multi-stage process of receiving, validating and indexing raw instrument data, and processing it to generate higher level of scientific products can all be accomplished in less than 20 minutes, compared to 48 hours for other missions not being operated on the cloud. Within this short time, the mission science team would have immediate access to the processed data and perform their scientific analysis.

Omran Al-Hammadi, senior manager, Science Data Section, MBRSC, said, “The Emirates Mars Mission ‘Hope Probe’ will be the first probe to provide a complete picture of the Martian atmosphere and its layers. It will help answer key questions about the global Martian atmosphere and the loss of hydrogen and oxygen gases into space over the span of one Martian year. The mission science data center is completely deployed on AWS and utilizes different available managed services and infrastructure to fully automate the mission’s data management and processing.”

“It’s exciting to see MBRSC pushing the boundaries of cloud applications for deep space exploration,” said Clint Crosier, director, AWS Aerospace and Satellites. “Our team is proud to provide mission-critical support for delivering the vast volumes of data and intelligence from the Hope Probe to the scientific community.”

Cloud technology is powering this complex data management, processing, and data dissemination. Scientific instrument data is downlinked from the spacecraft to the Deep Space Network (DSN), and delivered to the Mission Operations Center (MOC). The MOC delivers all science data and any other information required for science data processing to the mission Science Data Center hosted on AWS, where it is indexed, stored and processed for the duration of the mission.

The mission Science Data Center will use AWS Step Function to orchestrate various AWS Lambda functions to check, index, and move files into a master database, and Amazon Simple Storage Service (Amazon S3) for shared storage. Then, data from each of the probe’s instruments will be dynamically processed using AWS Batch which utilizes containerized processing software stored on AWS Elastic Container Registry (ECR).

Finally, the data is disseminated to the Emirates Mars Mission Science team and the scientific community via an Amazon CloudFront powered website. The website is hosted in an Amazon S3 bucket for high availability and scalability.

Amazon Cognito powers the site’s user authentication and authorization tool, which is important for secure access to the website. Registered researchers will get their own unique URL so there is no unauthorized access to data and no accessibility issues when the data is first made available.

While the orbiter’s scientific mission will last for the next two years, the mission intends to provide long-lasting benefits including important insights for improving life on Earth and inspiring the next generation of explorers and innovators. 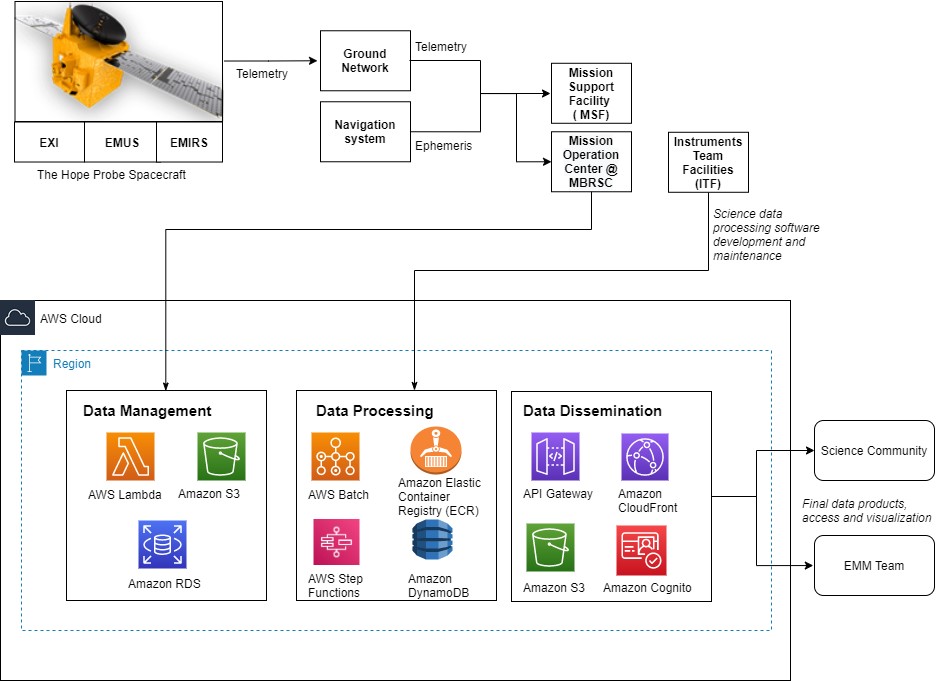