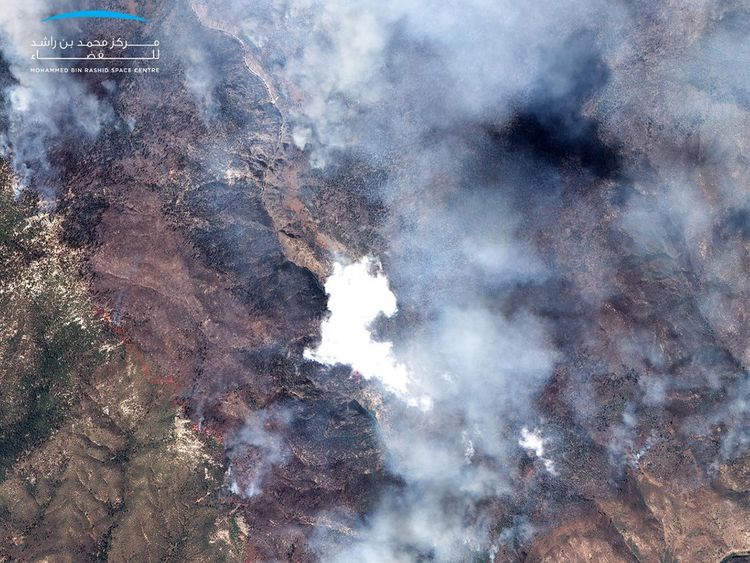 KhalifaSat image of California wildfires in 2020

Dubai-based MBRSC advances space science and advanced technology using data from UAE satellites and various applications related to space science to support development of various industry sectors within the UAE and across the globe. The UAE, which prioritizes space science and scientific research in the region, uses Earth imagery sent back from their satellites to support multiple organizations. The data is used to support natural disaster management, rescue mission updates, and support environmental health monitoring and land planning.

Launched in October 2018, KhalifaSat was the first satellite in low-Earth orbit (LEO) that was completely innovated, built, and produced in the UAE, by a team of skilled Emirati engineers. KhalifaSat is a remote-sensing Earth observation satellite that orbits Earth every 98.1 minutes and provides high-resolution satellite images that help monitor critical conditions on Earth, such as droughts and wildfires. Equipped with the latest in space and imaging equipment, KhalifaSat is more agile than its predecessors; DubaiSat-1 launched in 2009 and DubaiSat-2 launched in 2013.

MBRSC uses AWS Ground Station to downlink Earth observation data from KhalifaSat along with AWS storage and compute capabilities to quickly transport satellite imagery so that first responders have the actionable information they need to help them protect and save human lives and natural resources.

Eng. Adnan Alrais, senior director remote sensing department at Mohammed Bin Rashid Space Centre, said, “The KhalifaSat is one of the most advanced Earth imaging satellites from the region, and has played an important role in providing high-resolution images for a number of organizations worldwide. By using AWS Ground Station, we have been able to download satellite data at reduced cost and time, which in turn has allowed quick turnaround of analysis and insights for our clients. We look forward to further optimizing our services through this partnership and scale our operations to deliver value to our customers.”

MBRSC wanted to make sure it could schedule contacts for KhalifaSat customers at times requested. Installing more ground station equipment, such as satellite dishes and data compute, processing, and storage resources on premises increases capital expenditures. With AWS Ground Station and AWS storage and compute services, MBRSC can provide customers scheduling availability and accelerate their satellite data downlinks from KhalifaSat. AWS Ground Station also helps MBRSC provide customers continual monitoring, so they can assess changes in conditions, such as the spread of wildfires.