I am always amazed at how our customers are using streaming data. For example, Thomson Reuters, one of the world’s most trusted news organizations for businesses and professionals, built a solution to capture, analyze, and visualize analytics data to help product teams continuously improve the user experience. Supercell, the social game company providing games such as Hay Day, Clash of Clans, and Boom Beach, is delivering in-game data in real-time, handling 45 billion events per day.

Since we launched Amazon Kinesis at re:Invent 2013, we have continually expanded the ways in in which customers work with streaming data on AWS. Some of the available tools are:

At re:Invent 2018, we introduced in open preview Amazon Managed Streaming for Apache Kafka (MSK), a fully managed service that makes it easy to build and run applications that use Apache Kafka to process streaming data.

I am excited to announce that Amazon MSK is generally available today!

While Kafka is a popular enterprise data streaming and messaging framework, it can be difficult to setup, scale, and manage in production. Amazon MSK takes care of these managing tasks and makes it easy to set up, configure, and run Kafka, along with Apache ZooKeeper, in an environment following best practices for high availability and security.

Your MSK clusters always run within an Amazon VPC managed by the MSK service. Your MSK resources are made available to your own VPC, subnet, and security group through elastic network interfaces (ENIs) which will appear in your account, as described in the following architectural diagram: 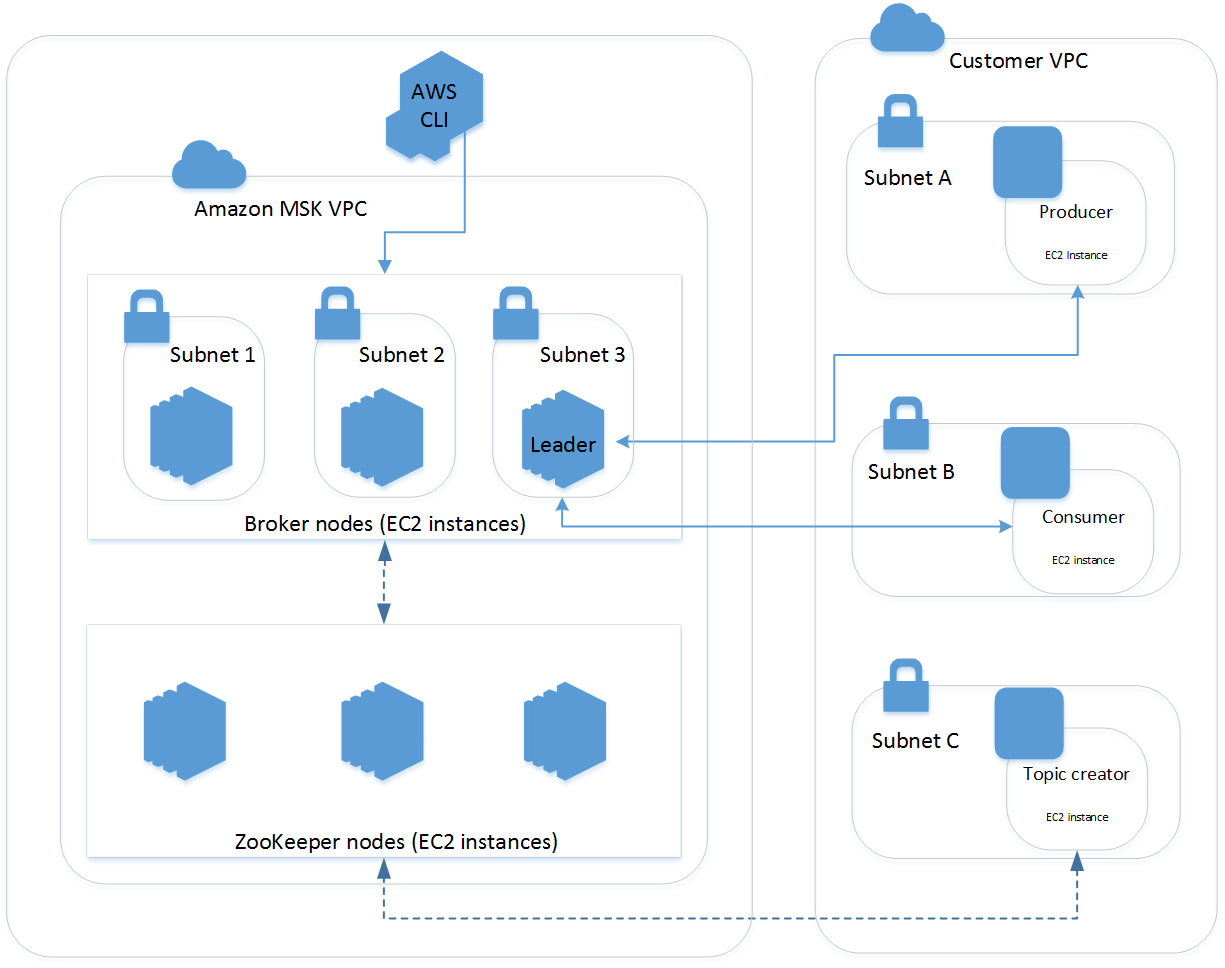 Amazon MSK continuously monitors server health and automatically replaces servers when they fail, automates server patching, and operates highly available ZooKeeper nodes as a part of the service at no additional cost. Key Kafka performance metrics are published in the console and in Amazon CloudWatch. Amazon MSK is fully compatible with Kafka versions 1.1.1 and 2.1.0, so that you can continue to run your applications, use Kafka’s admin tools, and and use Kafka compatible tools and frameworks without having to change your code.

Based on our customer feedback during the open preview, Amazon MSK added may features such as:

AWS CloudFormation support is coming in the next few weeks.

Let’s create a cluster using the AWS management console. I give the cluster a name, select the VPC I want to use the cluster from, and the Kafka version. 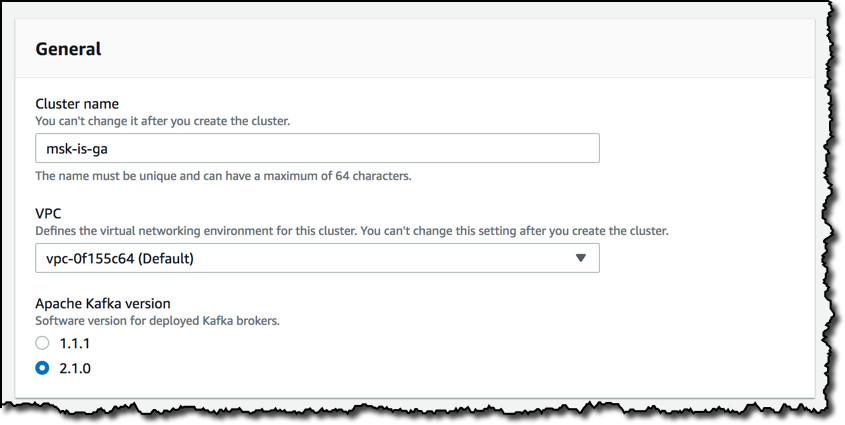 I then choose the Availability Zones (AZs) and the corresponding subnets to use in the VPC. In the next step, I select how many Kafka brokers to deploy in each AZ. More brokers allow you to scale the throughtput of a cluster by allocating partitions to different brokers.

I can add tags to search and filter my resources, apply IAM policies to the Amazon MSK API, and track my costs. For storage, I leave the default storage volume size per broker. 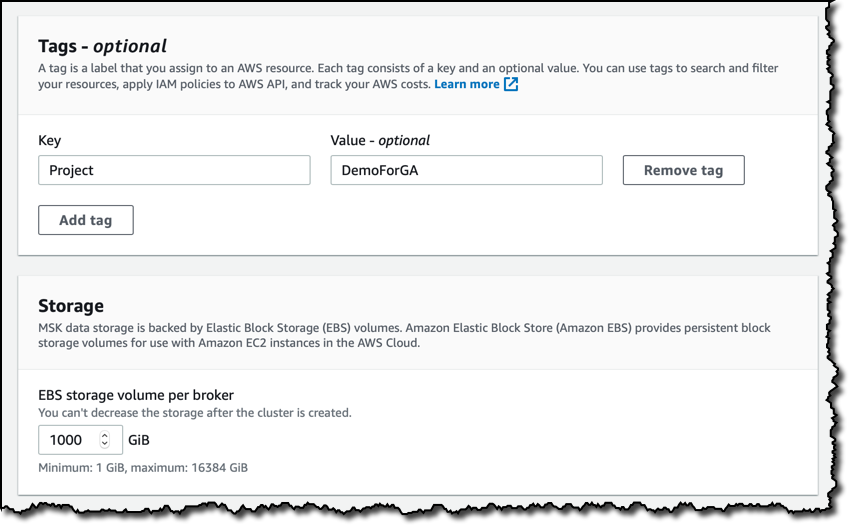 I select to use encryption within the cluster and to allow both TLS and plaintext traffic between clients and brokers. For data at rest, I use the AWS-managed customer master key (CMK), but you can select a CMK in your account, using KMS, to have further control. You can use private TLS certificates to authenticate the identity of clients that connect to your cluster. This feature is using Private Certificate Authorities (CA) from ACM. For now, I leave this option unchecked. 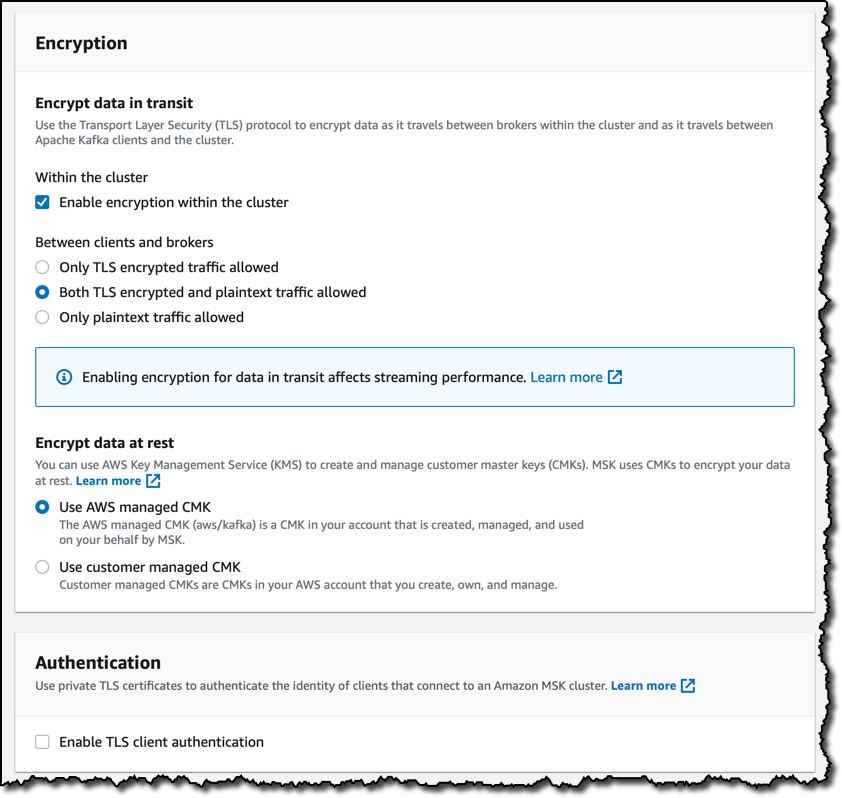 In the advanced setting, I leave the default values. For example, I could have chosen here a different instance type for my brokers. Some of these settings can be updated using the AWS CLI. 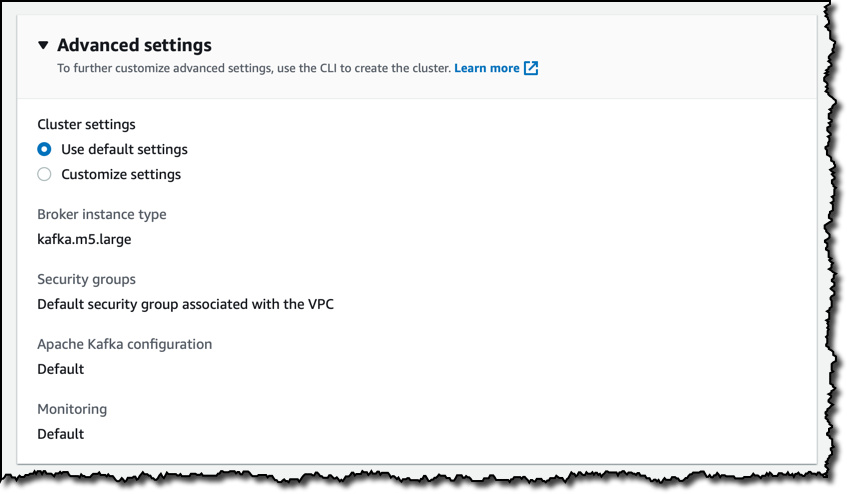 I create the cluster and monitor the status from the cluster summary, including the Amazon Resource Name (ARN) that I can use when interacting via CLI or SDKs.

When the status is active, the client information section provides specific details to connect to the cluster, such as: 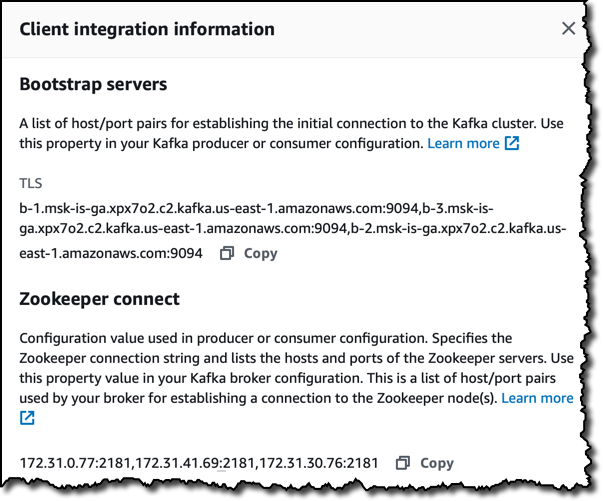 I can get similar information using the AWS CLI:

To start using Kafka, I create two EC2 instances in the same VPC, one will be a producer and one a consumer. To set them up as client machines, I download and extract the Kafka tools from the Apache website or any mirror. Kafka requires Java 8 to run, so I install Amazon Corretto 8.

On the producer instance, in the Kafka directory, I create a topic to send data from the producer to the consumer:

Then I start a console-based producer:

On the consumer instance, in the Kafka directory, I start a console-based consumer:

Here’s a recording of a quick demo where I create the topic and then send messages from a producer (top terminal) to a consumer of that topic (bottom terminal):

You can migrate your existing Kafka cluster to MSK using tools like MirrorMaker (that comes with open source Kafka) to replicate data from your clusters into a MSK cluster.

Upstream compatibility is a core tenet of Amazon MSK. Our code changes to the Kafka platform are released back to open source.

I look forward to see how are you going to use Amazon MSK to simplify building and migrating streaming applications to the cloud!