Update, August 2022: The Southern Cross Next Cable Network is now online, adding an additional network with a capacity of 72 terabits per second (tbps) to Aotearoa-New Zealand’s international connectivity.

Amazon Web Services (AWS) serves more than a million private and public sector organizations all over the world from its extensive and expanding global infrastructure.

Like other countries, organizations all around New Zealand are using AWS to change the way they operate. For example, Xero, a Wellington-based online accountancy software vendor, now serves customers in more than 100 countries, while the Department of Conservation provides its end users with virtual desktops running in Amazon Workspaces.

New Zealand doesn’t currently have a dedicated AWS Region. Geographically, the closest is Asia Pacific (Sydney), which is 2,000 kilometers (km) away, across a deep sea. While customers rely on AWS for business-critical workloads, they are well-served by New Zealand’s international connectivity.

To connect to Amazon’s network, our New Zealand customers have a range of options:

All rely on the extensive internet infrastructure connecting New Zealand to the world.

The vast majority of internet traffic is carried over physical cables, while the percentage of traffic moving over satellite or wireless links is small by comparison.

Historically, cables were funded and managed by consortia of telecommunication providers. More recently, large infrastructure and service providers like AWS have contributed to or are building their own cable networks.

There are currently about 400 submarine cables in service globally. Modern submarine cables are fiber-optic, run for thousands of kilometers, and are protected by steel strands, plastic sheathing, copper, and a chemical water barrier. Over that distance, the signal can weaken—or attenuate—so signal repeaters are installed approximately every 50km to mitigate attenuation. Repeaters are powered by a charge running over the copper sheathing in the cable. 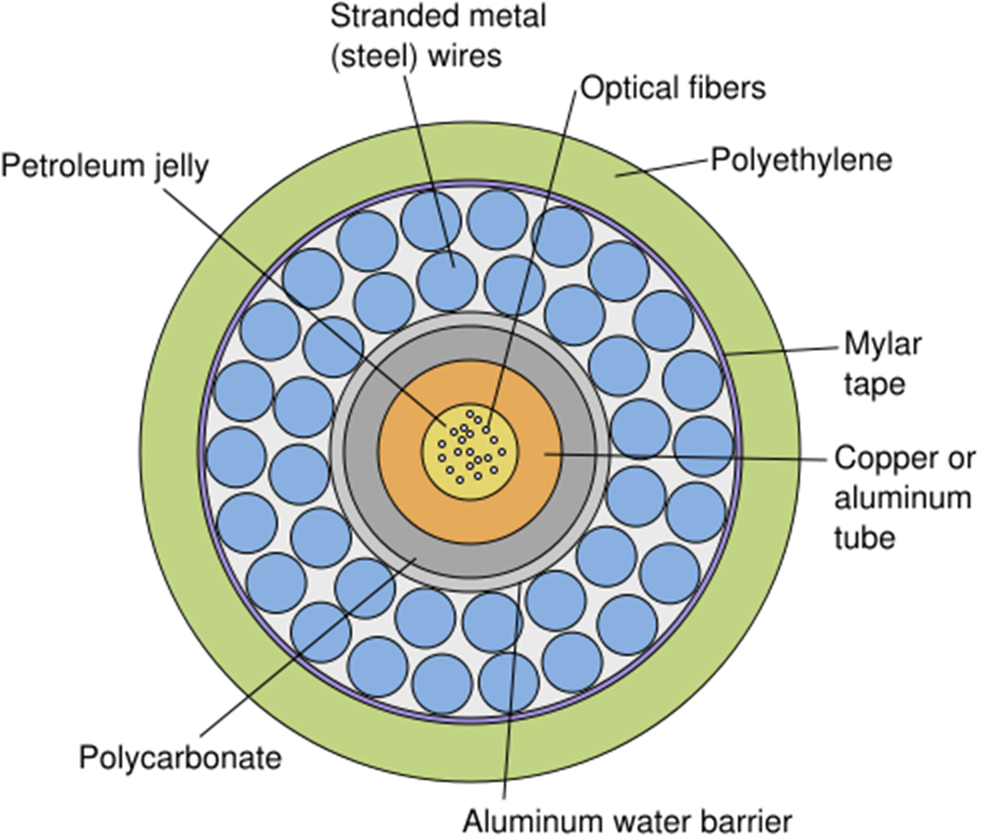 For most of their run, these cables are about as thick as a standard garden hose. They are thicker, however, closer to shore and in areas where there’s a greater risk of damage by fishing nets, boat anchors, etc.

Cables can—and do—break, but redundancy is built into the network. According to Telegeography, there are 100 submarine cable faults globally every year. However, most faults don’t impact users meaningfully. 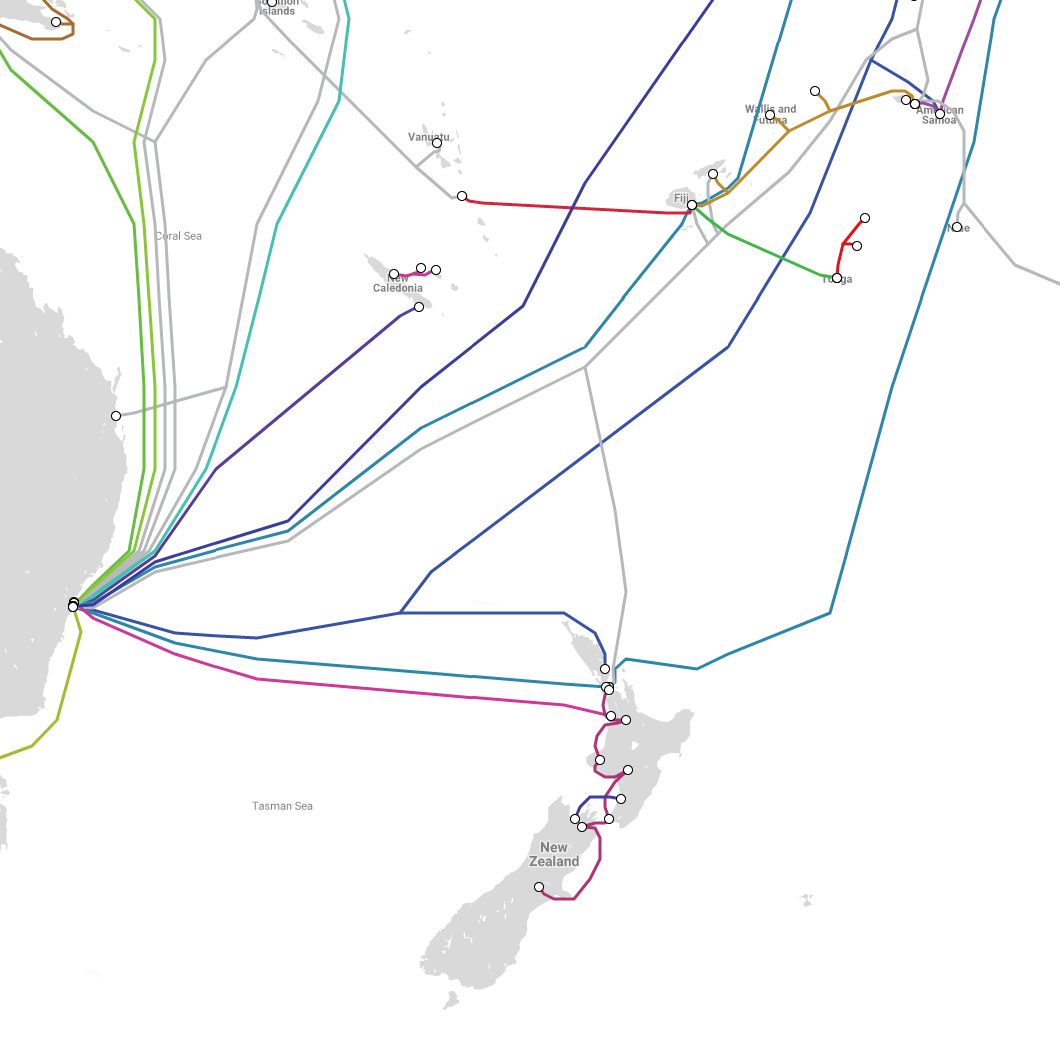 The four cables combined currently deliver 66 Tbps of available capacity. The Southern Cross NEXT cable is due to come online in 2020, which will add another 72 Tbps. These are, of course, potential capacities; it’s likely the “lit” capacity—the proportion of the cables’ overall capacity that is actually in use—is much lower.

Connecting to AWS from New Zealand

While understanding the physical infrastructure is important in practice, these details are not shared with customers. Connectivity options are evaluated on the basis of partner and AWS offerings, which include connectivity.

Customers connect to AWS in three main ways: over public endpoints, via site-to-site VPNs, and via Direct Connect (DX), all typically provided by partners.

Customers can connect to public endpoints for AWS services over the public internet. Some services, like Amazon CloudFront, Amazon API Gateway, and Amazon WorkSpaces are generally used in this way.

Network-level access can be controlled via various means depending on the service, whether that is Endpoint Policies for API Gateway, Security Groups, and Network Access Control Lists for Amazon Virtual Private Cloud (VPC), or Resource Policies for services such as Amazon S3, Amazon Simple Queue Service (SQS), or Amazon Key Management Service (KMS).

All services offer TLS or IPsec connectivity for secure encryption-in-motion.

Many organizations use a VPN to connect to AWS. It’s the simplest and lowest cost entry point to expose resources deployed in private ranges in an Amazon VPC. Amazon VPC allows customers to provision a logically isolated network segment, with fine-grained control of IP ranges, filtering rules, and routing.

If using an AWS managed VPN, the AWS endpoints have publicly routable IPs. They can be connected to over the public internet or via a Public Virtual Interface over DX (outlined below).

Customers can also deploy VPN appliances onto Amazon Elastic Compute Cloud (EC2) instances running in their VPC. These may be self-managed or provided by Amazon Marketplace sellers.

While connectivity over the internet is secure and flexible, it has one major disadvantage: it’s unpredictable. By design, traffic traversing the internet can take any path to reach its destination. Most of the time it works but occasionally routing conditions may reduce capacity or increase latency.

DX connections are either 1 or 10 Gigabits per second (Gbps). This capacity is dedicated to the customer; it isn’t shared, as other network users are never routed over the connection. This means customers can rely on consistent latency and bandwidth. The DX per-Gigabit transfer cost is lower than other egress mechanisms. For customers transferring large volumes of data, DX may be more cost effective than other means of connectivity.

Customers may publish their own 802.11q Virtual Local Area Network (VLAN) tags across the DX, and advertise routes via Border Gateway Protocol (BGP). A dedicated connection supports up to 50 private or public virtual interfaces. New Zealand does not have a physical point-of-presence for DX—users must procure connectivity to our Sydney Region. Many AWS Partner Network (APN) members in New Zealand offer this connectivity.

There are physical limits to latency dictated by the speed of light, and the medium through which optical signals travel. Southern Cross publishes latency statistics, and it sees one-way latency of approximately 11 milliseconds (ms) over the 2,276km Alexandria to Whenuapai link. Double that for a round-trip to 22 ms.

In practice, we see customers achieving round-trip times from user workstations to Sydney in approximately 30-50 ms, assuming fair-weather internet conditions or DX links. Latency in Auckland (the largest city) tends to be on the lower end of that spectrum, while the rest of the country tends towards the higher end.

Bandwidth constraints are more often dictated by client hardware, but AWS and our partners offer up to 10 Gbps links, or smaller as required. For customers that require more than 10 Gbps over a single link, AWS supports Link Aggregation Groups (LAG).

As outlined above, there are a range of ways for customers to adopt AWS via secure, reliable, and performant networks. To discuss your use case, please contact an AWS Solutions Architect.