QsrSoft is a software as a service (SaaS) company that develops solutions for clients in the restaurant, hospitality, and retail industries to help them achieve operational excellence. QsrSoft has provided these services for more than two decades and now services over 14,000 locations. QsrSoft started using AWS in 2015 and fully migrated all their workloads to AWS by 2016. QsrSoft can innovate rapidly with AWS and use best-in class technologies for cloud-native solutions for their customers.

In QsrSoft’s target industries, it is important to have a way to focus and motivate employees on common objectives. It can be hard to stay on top of ongoing activities and inspire a team towards operational goals. Through client engagement and data collection, QsrSoft identified this as a pressing business challenge that could be solved with technology. After attending an AWS Digital Innovation Program workshop, QsrSoft conceptualized a digital huddle board that connects teams through gamification, communication, recognition, and excellence in shift management. To bring QsrSoft TV to market in the shortest possible time, QsrSoft decided to build using the AWS serverless suite of services.

QsrSoft successfully lowered the barrier of entry when installing a digital huddle board. Using commodity hardware from Amazon devices such as Fire TV Sticks and Fire Smart TVs, QsrSoft released the product as an app in the Amazon App store. Clients can use existing TV screens when rolling out QsrSoft TV, and only have to plug in a Fire TV Stick and pair it with a five-digit code. This blog post describes QsrSoft TV’s architecture and the AWS services employed in building it.

Building on top of their existing microservices architecture and AWS Amplify, a team of three developers brought QsrSoft TV to market in three months. The solution relies heavily on serverless technologies on AWS. Traditionally, in developing a new product, QsrSoft would need to engage several specialized technical resources. Using the fully managed experience of serverless technologies, QsrSoft can focus on delivering business value for the use case. AWS takes care of managing the technology’s hosting and implementation. With serverless, you only pay for what you use, which makes it possible to correlate your costs with the success of your solution.

Figure 1 illustrates the architecture of this solution: 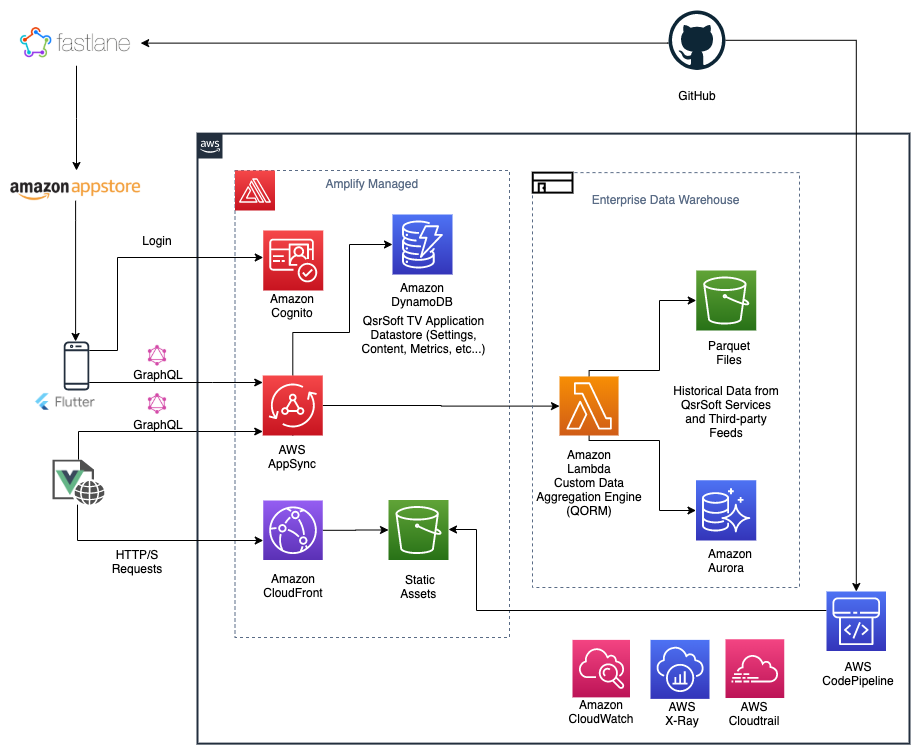 The customer-facing component of the solution is the application, which runs on Fire devices in restaurants. AWS Amplify is a service that streamlines development of both web applications and native apps. The app is derived from a single-page application (SPA) developed with Vue.js. AWS Amplify provides features such as integrated authentication, CI/CD, and Web Preview. It also provides GraphQL-based endpoints to access Amazon DynamoDB using AWS AppSync. This enables the QsrSoft development team to function autonomously without dependency on the operations or data integration teams. You can connect to the different Amplify backends from the AWS Management Console or with command line interface (CLI) commands. With the Amplify CLI, you can use default categories for the backends or use the AWS Cloud Development Kit (CDK) to customize them.

The heart of QsrSoft TV is the API that provides the application with its core functionality. QsrSoft built an AWS AppSync endpoint to power QsrSoft TV’s business logic. AWS Amplify provides an easy way to create a secure AWS AppSync API endpoint through integrated authentication and transport layer security (TLS) for in-transit encryption. The development team can first model the data visually in Amplify Studio. Amplify then creates the queries, subscriptions, and mutations. With a single click from the Studio, you can deploy this model to an AWS AppSync API endpoint. The use of annotations permitted the dev team to customize the model further for the application’s needs, such as indexing by key attributes, authorization, and model relationships. This feature of Amplify Studio saved the development team up to 50% of the total API development effort.

AWS Amplify abstracts the need for a dedicated operations team. This is enabled by AWS Amplify’s fully managed deployment and hosting for full-stack web applications. The development team connected Amplify to the GitHub repository, and in minutes had a complete CI/CD pipeline in place. There was no need to configure any pipelines or handcraft any YAML files. QsrSoft uses Amplify Web Previews, which enabled the product team and beta testers to preview multiple changes and experiments without releasing code to production. While Amplify deployed the Vue.js application, QsrSoft used fastlane to automate the deployment of the Fire TV application into the Amazon App Store. fastlane is an open-source tool that automates tasks like code signing and releasing the Fire TV binary to the Amazon App Store. This enabled QsrSoft to stay true to its automated deployments and infrastructure as code (IaC) practices.

With this command line statement, amplify add auth, QsrSoft laid the groundwork for securing their TV application. Behind the scenes, Amplify uses Amazon Cognito to set up a user pool for the app users. QsrSoft TV provides a password-less login experience to the users, by abstracting the need to log in using a username and password. Instead, you use a five-digit code to pair the Fire TV app with a specific location. Amazon Cognito enables this by securing the app with JSON web tokens (JWT).

The development team focused on data modeling using the visual tools built into Amplify Studio. Amplify provided an AWS AppSync endpoint, so the developers could use GraphQL to interact with Amplify DataStore. Since the data models in the Amplify Studio support DataStore, the development team can now support an app that works offline. Offline mode is vital to any enterprise application, and it engages QsrSoft TV’s users even during an internet outage. Amplify is used to create an AWS AppSync backend with Amazon DynamoDB tables that match the schema created at the application. As the app interacts with the local DataStore, it starts an instance of its Sync Engine, which publishes the data changes by the application to the DynamoDB backend. An additional AWS Lambda-based backend called QORM, aggregates information from QsrSoft’s custom data warehouse implementation based on Amazon S3 and Amazon Aurora.

The scaling and performance provided by DynamoDB and Lambda allowed QsrSoft to scale without extensive planning, as the number of installs increased. This fully serverless application stack is cost-effective and enables QsrSoft to innovate freely. QsrSoft TV onboarded 100 locations in the first week. QsrSoft projects 7,000+ installs in the first year.

AWS is constantly innovating on behalf of our customers like QsrSoft. By leveraging serverless technologies on AWS, QsrSoft accelerated the go-to-market time for QsrSoft TV. Serverless on AWS provides a low barrier to entry for innovation-focused organizations who want to bring an idea to life quickly to provide business value to their customers.

Amazon Fire devices enable software vendors to make their applications available for large-scale distribution. Fire devices are today being used by several thousand households and workplaces worldwide. Many industries can benefit from developing apps for Amazon Fire devices that can be used on large displays and television screens.