Enterprise data warehouses are complex and can consist of tens of thousands of database objects (such as tables, views, or grants) that need to be carefully modified to reflect the changing needs of business, data analytics, and machine learning (ML) teams.

In this post, we will examine an approach to managing the evolution of enterprise-scale data warehouses based on the experience of Deloitte‘s Data and Artificial Intelligence (AI) global practice teams.

Deloitte is an AWS Premier Consulting Partner and Managed Service Provider (MSP) with the Amazon Redshift delivery designation. Deloitte’s end-to-end capabilities and understanding of your business and industry help amplify the transformative value of cloud.

Changes to data warehouse environments supporting the full software development lifecycle (SDLC) can be made inconsistently and lead to environment drift.

If this happens, environments can become impossible to consistently reproduce and cause both DDL and ETL/ELT operations to fail along with subsequent analytics, business intelligence, and machine learning tasks.

When managed manually in an enterprise data warehouse, these issues translate to increased operational risk, protracted time to deployment and business value, and increased cost.

The following sections show how such issues can be mitigated without the need for explicit coding, and how they can be incorporated into existing deployment automation tooling.

Many organizations have adopted modern approaches to the delivery of IT projects. The agile methodology and DevOps practices encourage the breaking down of organizational silos to achieve greater collaboration, faster time to value, and the avoidance of issues throughout the SDLC by employing high levels of automation.

The learnings from these movements are permeating business project management, as well as areas of IT beyond traditional application delivery including artificial intelligence (AI), machine learning, and data.

DataOps is an adaptation of the approaches outlined above to apply to the building and ongoing change management of data lakes and lake houses, data staging, crawling, ETL/ELT and data pipelines, analytics, and business intelligence. To do this successfully, cross-team collaboration and automation are just as critical in the data domain as they are in the application domain.

The diagram in Figure 1 below depicts a high-level architecture and tools devised by Deloitte and applied at complex data engagements to address the challenges above. The two main tools we’ll focus on are the Comparator and Deployment tools.

The role of the Comparator is to identify any differences between a baseline Amazon Redshift DDL configuration specified in YAML and a target Amazon Redshift cluster. The Comparator generates any DDL statements that must be applied to address any drift, plus additional logging information summarizing these operations for the benefit of data engineers.

The Deployment tool is responsible for taking the output of the Comparator tool and applying the generated DDL statements to address any identified drift.

Both tools are implemented in Python and can be integrated into DataOps automation processes, as illustrated below driven by AWS CodeCommit and AWS CodePipeline. 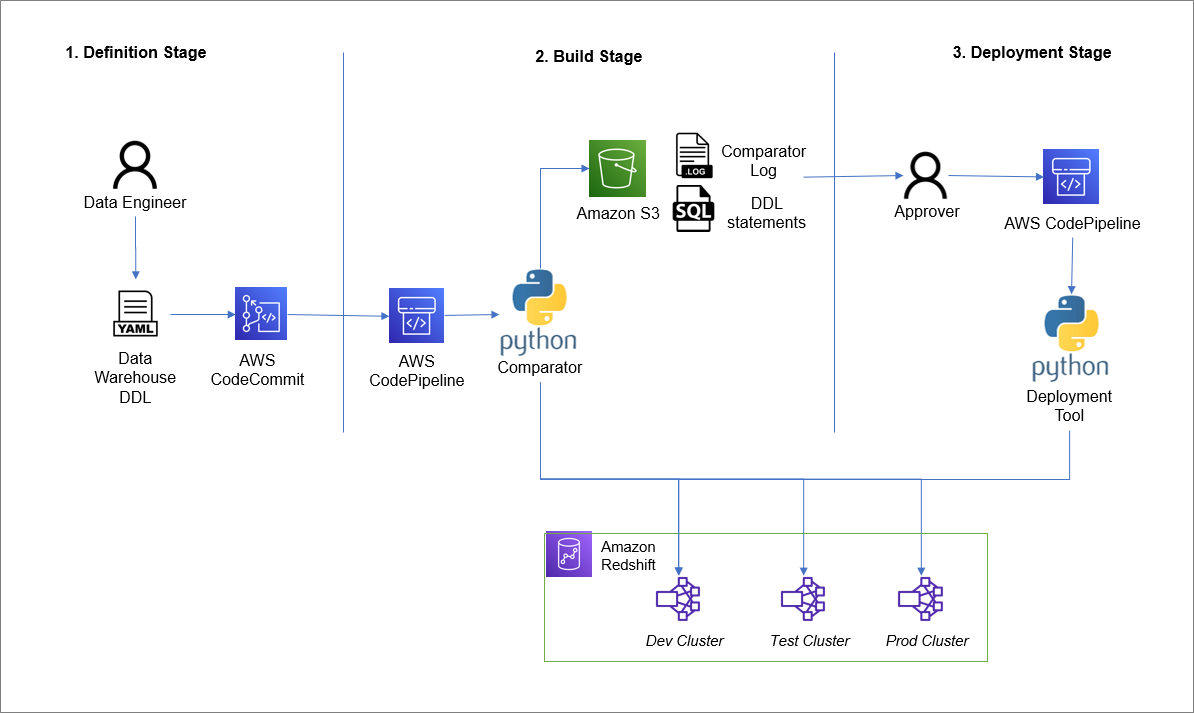 In the following sections, we’ll expand upon the details of each stage in the data definition pipeline.

In the definition stage, a data engineer describes data warehouse objects in YAML files and checks these into a source code repository such as Git or AWS CodeCommit.

Initial commits will define new objects in their base form, whilst later commits will represent both new objects and changes to existing objects. Commits can trigger build and deploy actions, however this is not shown.

The definition stage also allows a data engineer to specify the order in which objects are to be deployed, or to rely on predefined ordering within the solution.

The diagram below shows part of a YAML baseline configuration file used by the Comparator tool. It defines a dimension table dim_business_address in the edz schema. The definition includes common information like sort and distribution keys, as well as column names and types.

The definition also specifies a view to be created in the bdz schema applying any schema rules such as active record only filter or masking of personally identifiable information (PII). Common rules for a schema (not shown) can be specified, which will be transparently applied to ensure audit and other mandatory columns are consistently applied to all table definitions. 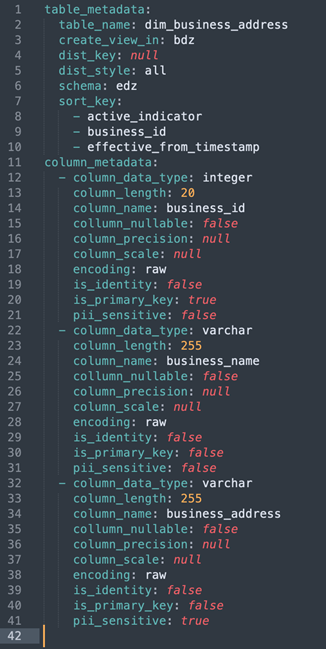 The build stage can also identify a lack of adherence to naming conventions and a range of other standards, such as the existence of audit fields and field ordering, amongst others. It can also take certain actions like performing backups when potentially destructive operations may be involved.

The final object emitted is a log summarizing details of the change list and deployment sequence information. Logs and automatically generated data definition SQL files are stored centrally in Amazon Simple Storage Service (Amazon S3) where they are available to subsequent phases.

Below, we see an example output log file generated from the table YAML configuration shown in Figure 2. It has defined a table in the edz schema to be created, a bdz view to be created, and due to a schema rule for edz there will be a staging table created in the stg schema.

This highlights the power of automatic DDL generation, as a developer hasn’t needed to define the bdz view or staging table. We also see there’s a collection of other tables that have not been changed, and therefore will have no action applied. 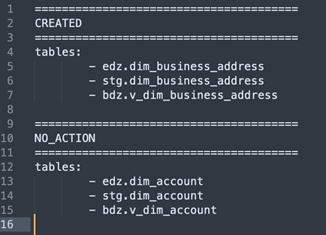 The deploy stage applies the automatically generated DDL produced in the previous phase to the corresponding Amazon Redshift target cluster, after human review and approval if required.

Like previous stages, AWS CodePipeline can be used to orchestrate CI/CD stages and actions. However, organizations that have based their CI/CD automation around other tools such as Jenkins could base their orchestration around pre-existing tooling, if desired.

The tool supporting the deploy stage operates in a declarative manner. That is, you specify what you want your Amazon Redshift environment to look like, and the tool takes the necessary actions to effect the required changes.

This is in contrast to the imperative approach in which each change would need to be uniquely scripted (possibly per environment, to account for any differences) and carefully sequenced, requiring considerably more effort and possibly introducing errors along the way due to the manual nature of the effort.

In this post, we have seen how the evolution of objects in an Amazon Redshift data warehouse can be managed with best practices from DataOps using a declarative approach as supported by Deloitte’s Comparator and Deployment tools.

We have shown the high-level stages of deployment pipeline, from defining objects in YAML, automatically generating DDL against development, test, and production environments all the way through to review/approval and deployment into a target environment.

We have shown how the deployment pipeline architecture works well with AWS CodeCommit and AWS CodeDeploy services, though it could be made to work with other CI/CD orchestration tooling. The approach to data warehouse management automates complex, granular activities typically requiring many steps and dependencies.

In addition to automatically discovering what needs to be done and taking the necessary actions, we saw that other actions can be automated including enforcement of naming conventions and other standards, logging of actions, and performing backups and clean-up actions. This leads to less effort, fewer errors, and faster time to business value.

For more information, reach out to the Deloitte Data & AI team to see how they can bring this approach and tooling together with extensive experience in big data and analytics to bear on your analytics projects.

Deloitte is an AWS Premier Consulting Partner and MSP. Through a network of professionals, industry specialists, and an ecosystem of alliances, they assist clients in turning complex business issues into opportunities for growth, helping organizations transform in the digital era.