Long gone are the days when developers had to wait two to three months for IT to provision new servers. On AWS, developers can test and deploy in minutes or hours, resulting in more frequent product releases–and better products.

Spring Venture Group is a group of insurance brokerages that’s expecting double or triple digit growth in the next three years, in large part due to their innovative approach to providing data analytics and other software services to sellers and customers.

As a health insurance sales organization, Spring Venture Group needs to maintain HIPAA compliance, so the potential impact of even a single misconfigured AWS resource is high.

Spring Venture Group saw the power of providing developers with self-service access to AWS resources. However, they did not want developers to manually build each new AWS environment in the AWS Management Console. Manual approaches can result in “snowflake” environments, which create new organizational risks such as improperly configured security controls.

Spring Venture Group reached out to our team at Logicworks, an AWS Partner Network (APN) Premier Consulting Partner and Managed Service Provider with the AWS Healthcare Competency, to architect and manage their AWS deployment.

Spring Venture Group’s developers were comfortable building and deploying containers in their on-premises environment, but were eager to get greater agility and flexibility on AWS. They faced severe availability issues running containers on-premises.

Although Spring Venture Group’s environment was built prior to the release of Amazon Elastic Container Service for Kubernetes (Amazon EKS), many of the environment’s strengths are also part of the Amazon EKS service.

To maintain HIPAA standards, several key security features (intrusion detection, logging, bastion hosts, and centralized authentication) should be present in each Virtual Private Cloud (VPC). Rather than replicating standard features in each VPC, Logicworks created a central hub VPC that is peered to spoke VPCs. This provides Spring Venture Group with a separation of concerns, network isolation, and a basis for comparison of security groups.

Additionally, all Logicworks customers are subject to a background process that ensures AWS CloudTrail and AWS Config recording are properly enabled in all regions. This is a crucial step in any environment, allowing for easy detection of unusual or unexpected activity in other regions, and forensics that aid in resolution of complex security issues.

After Logicworks designed the architecture for Spring Venture Group, we built an AWS CloudFormation template that launched their hub-spoke VPC model and Amazon ECS clusters. 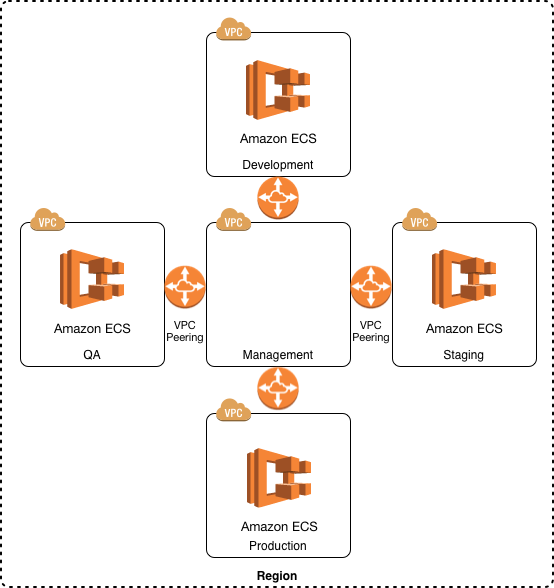 Spring Venture Group’s developers know that when they launch an AWS environment from AWS Service Catalog, the key security and compliance features are already in place. They don’t have to do any manual configuration of instances or Amazon ECS clusters. The environment is ready for their application-specific Docker containers.

Spring Venture Group used to face significant reliability and performance issues running containers on-premises. Now on AWS, they’re pushing hundreds of product updates a year, and they’ve been able to keep up with the growth of their business.

Logicworks is an APN Premier Consulting Partner. They provide expertise in complex infrastructure for industries with high security and compliance requirements, including finance, healthcare, and retail.