Amazon Redshift is a fully managed, petabyte-scale data warehouse service in the cloud that offers fast query performance using the same SQL-based tools and business intelligence applications that you use today. Many customers also like to use Amazon Redshift as an extract, transform, and load (ETL) engine to use existing SQL developer skillsets, to quickly migrate pre-existing SQL-based ETL scripts, and—because Amazon Redshift is fully ACID-compliant—as an efficient mechanism to merge change data from source data systems.

While many traditional SQL-based workflows use internal database constructs like triggers and stored procedures, separating workflow orchestration, task, and compute engine components into standalone services allows you to develop, optimize, and even reuse each component independently. So, while this post uses Amazon Redshift as an example, my aim is to more generally show you how to orchestrate any SQL-based ETL.

If you want to follow along with the examples in this post using your own AWS account, you need a Virtual Private Cloud (VPC) with at least two private subnets that have routes to an S3 VPC endpoint.

If you don’t have a VPC, or are unsure if yours meets these requirements, I provide an AWS CloudFormation template stack you can launch by selecting the following button. Provide a stack name on the first page and leave the default settings for everything else. Wait for the stack to display Create Complete (this should only take a few minutes) before moving on to the other sections.

For the examples in this post, I use the Amazon Customer Reviews Dataset to build an ETL workflow that completes the following two tasks which represent a simple ETL process.

This dataset is publicly available via an Amazon Simple Storage Service (Amazon S3) bucket. Complete the following tasks to get set up.

The following diagram highlights the solution architecture from end to end: 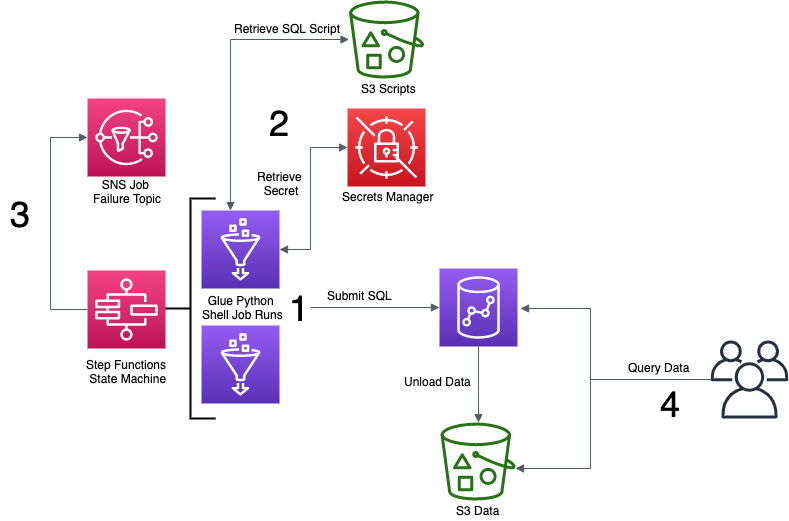 The steps in this process are as follows:

I include an AWS CloudFormation template to jumpstart the ETL environment so that I can focus this post on the steps dedicated to building the task and orchestration components. The template launches the following resources:

See the following resources for how to complete these steps manually:

Be sure to select at least two private subnets and the corresponding VPC, as shown in the following screenshot. If you are using the VPC template from above, the VPC appears as 10.71.0.0/16 and the subnet names are A private and B private.

The stack should take 10-15 minutes to launch. Once it displays Create Complete, you can move on to the next section. Be sure to take note of the Resources tab in the AWS CloudFormation console, shown in the following screenshot, as I refer to these resources throughout the post.

Begin by navigating to AWS Glue in the AWS Management Console.

Under Cluster, enter the name of the cluster that the AWS CloudFormation template launched, i.e blogstack-redshiftcluster-####. Because the Python code I provide for this blog already handles credential retrieval, the rest of the values around database information you enter here are largely placeholders. The key information you are associating with the connection is networking-related.

Please note that you are not able to test the connection without the correct cluster information.  If you are interested in doing so, note that Database name and Username are auto-populated after selecting the correct cluster, as shown in the following screenshot. Follow the instructions here to retrieve the password information from Secrets Manager to copy into the Password field.

Take a look at the two main Python scripts used in this example:

Pygresql_redshift_common.py is a set of functions that can retrieve cluster connection information and credentials from Secrets Manger, make a connection to the cluster, and submit queries respectively. By retrieving cluster information at runtime via a passed parameter, these functions allow the job to connect to any cluster to which it has access. You can package these functions into a library by following the instructions to create a python .egg file (already completed as a part of the AWS CloudFormation template launch). Note that AWS Glue Python Shell supports several python libraries natively.

The AWS Glue Python Shell job runs rs_query.py when called. It starts by parsing job arguments that are passed at invocation. It uses some of those arguments to retrieve a .sql file from S3, then connects and submits the statements within the file to the cluster using the functions from pygresql_redshift_common.py. So, in addition to connecting to any cluster using the Python library you just packaged, it can also retrieve and run any SQL statement. This means you can manage a single AWS Glue Python Shell job for all of your Amazon Redshift-based ETL by simply passing in parameters on where it should connect and what it should submit to complete each task in your pipeline.

Next, put that code into action:

When all is said and done everything should look as it does in the following screenshot: 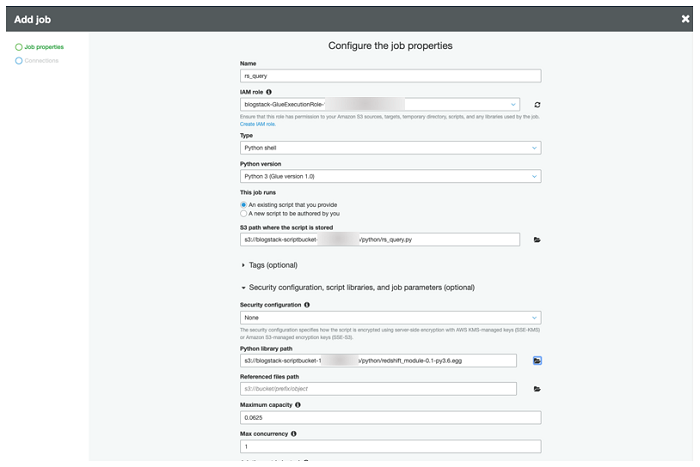 Choose Next. Add the connection you created by choosing Select to move it under Required connections. (Recall from the Making a connection section that this gives the job the ability to interact with your VPC.) Choose Save job and edit script to finish, as shown in the following screenshot.

After creating the job, you are taken to the AWS Glue Python Shell IDE. If everything went well, you should see the rs_query.py code. Right now, the Amazon Redshift cluster is sitting there empty, so use the Python code to run the following SQL statements and populate it with tables.

Do this first job run manually so you can see where all of the elements I’ve discussed come into play. Select Run Job at the top of the IDE screen. Expand the Security configuration, script libraries, and job parameters section. This is where you add in the parameters as key-value pairs, as shown in the following screenshot. 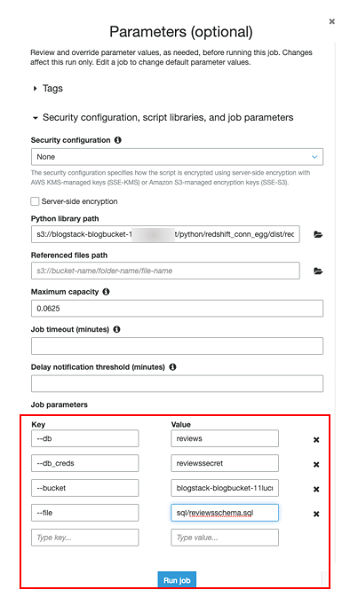 Select Run job to start it. The job should take a few seconds to complete. You can look for log outputs below the code in the IDE to watch job progress.

Once the job completes, navigate to Databases in the AWS Glue console and look for the amzreviews database and reviews table, as shown in the following screenshot. If they are there, then everything worked as planned! You can also connect to your Amazon Redshift cluster using the Redshift Query Editor or with your own SQL client tool and look for the local reviews table. 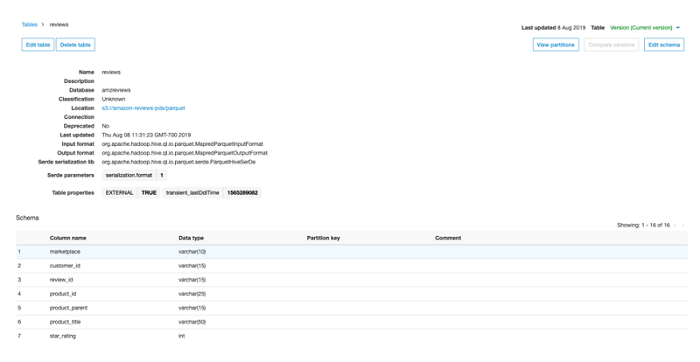 Now that you’ve had a chance to run a job manually, it’s time to move onto something more programmatic that is orchestrated by Step Functions.

I provide a third AWS CloudFormation template for kickstarting this process as well. It creates a Step Functions state machine that calls two instances of the AWS Glue Python Shell job you just created to complete the two tasks I outlined at the beginning of this post.

For BucketName, paste the name of the script bucket created in the second AWS CloudFormation stack. For GlueJobName, type in the name of the job you just created. Leave the other information as default, as shown in the following screenshot. Launch the stack and wait for it to display Create Complete—this should take only a couple of minutes—before moving on to the next section. 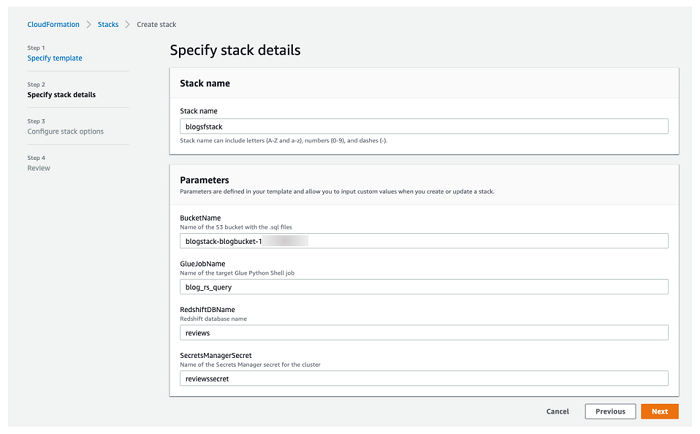 State Machines are made up of a series of steps, allowing you to stitch together services into robust ETL workflows. You can monitor each step of execution as it happens, which means you can identify and fix problems in your ETL workflow quickly, and even automatically.

Take a look at the state machine you just launched to get a better idea. Navigate to Step Functions in the AWS Console and look for a state machine with a name like GlueJobStateMachine-######. Choose Edit to view the state machine configuration, as shown in the following screenshot.

It should look as it does in the following screenshot:

As you can see, state machines are created using JSON templates made up of task definitions and workflow logic. You can run parallel tasks, catch errors, and even pause workflows and wait for manual callback to continue. The example I provide contains two tasks for running the SQL statements that complete the goals I outlined at the beginning of the post:

Each task contains basic error handling which, if caught, routes the workflow to an error notification task. This example is a simple one to show you how to build a basic workflow, but you can refer to the Step Functions documentation for an example of more complex workflows to help build a robust ETL pipeline. Step Functions also supports reusing modular components with Nested Workflows.

The state machine will retrieve and run the following SQL statements:

As I mentioned previously, Amazon Redshift Spectrum is a great way to run ETL using an INSERT INTO statement. This example is a simple load of the data as it is in S3, but keep in mind you can add more complex SQL statements to transform your data prior to loading.

This statement groups reviews by product, ordered by number of helpful votes, and writes to Amazon S3 using UNLOAD.

Now that everything is in order, start an execution. From the state machine main page select Start an Execution.

Leave the defaults as they are and select Start to begin execution. Once execution begins you are taken to a visual workflow interface where you can follow the execution progress, as shown in the following screenshot.

Each of the queries takes a few minutes to run. In the meantime, you can watch the Amazon Redshift query logs to track the query progress in real time. These can be found by navigating to Amazon Redshift in the AWS Console, selecting your Amazon Redshift cluster, and then selecting the Queries tab, as shown in the following screenshot.

Once you see COMPLETED for both queries, navigate back to the state machine execution. You should see success for each of the states, as shown in the following screenshot.

Next, navigate to the data bucket in the S3 AWS Console page (refer to the DataBucket in the CloudFormation Resources tab). If all went as planned, you should see a folder named testunload in the bucket with the unloaded data, as shown in the following screenshot.

Next, test the error handling component of the state machine by intentionally causing an error. An easy way to do this is to edit the state machine and misspell the name of the Secrets Manager secret in the ReadFilterJob task, as shown in the following screenshot.

If you want the error output sent to you, optionally subscribe to the error notification SNS Topic. Start another state machine execution as you did previously. This time the workflow should take the path toward the NotifyFailure task, as shown in the following screenshot. If you subscribed to the SNS Topic associated with it, you should receive a message shortly thereafter. 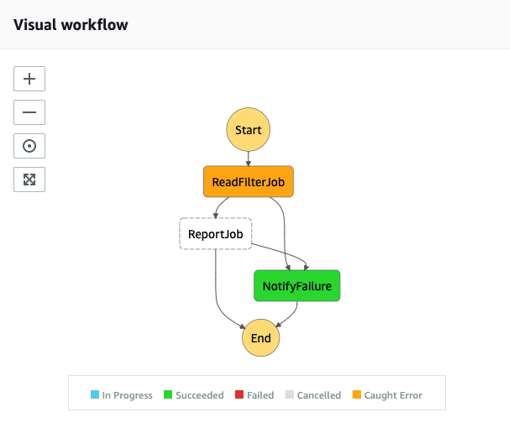 The state machine logs will show the error in more detail, as shown in the following screenshot.

In this post I demonstrated how you can orchestrate Amazon Redshift-based ETL using serverless AWS Step Functions and AWS Glue Python Shells jobs. As I mentioned in the introduction, the concepts can also be more generally applied to other SQL-based ETL, so use them to start building your own SQL-based ETL pipelines today!

Ben Romano is a Data Lab solution architect at AWS. Ben helps our customers architect and build data and analytics prototypes in just four days in the AWS Data Lab.