TINE SA, Norway's largest dairy cooperative, is creating new ways to combine technology, animal science, and age-old knowledge to create better dairy products. TINE is Norway's largest producer, distributor, and exporter of dairy products with 11,400 members (owners) and 9,000 cooperative farms. For more than 160 years, TINE has collaborated with Norway’s farmers to understand their challenges and help them drive efficiency, productivity, and high-quality dairy product development, particularly as market demands increase along with each farmer’s need to bring products to market more efficiently. That collaboration has always included the collection and management of large volumes of information.

“TINE has a long history of developing decision-making tools for farmers and collecting data from different dairy products at the farm level,” says Harald Volden, professor of animal science and head of research and development at TINE. “We’ve seen how dramatically data collection opportunities have evolved, particularly through technologies like Internet of Things, and we know that digital technology will fundamentally change the future of our industry.”

Mette Øyen Roald, director for radical innovation at TINE, says the Norwegian farmers who work with TINE are technologically savvy and have understood the value of collecting data on their animals and dairy production for decades. “Over time and with technological advancements, TINE has conducted structured research to examine the ‘optimal cow’ for dairy production using collected data,” she says. “We’ve found that focusing on the individuality of a cow enables farmers to discern when each cow is happy, stressed, anxious, and healthy. When our animals are healthier and happier, the quality of their milk is improved, which allows us to make even better dairy products while improving the welfare of the animal.”

As TINE considered the future of dairy production at both the farm and national level, its data science team realized there would be changes to the breadth and depth of its data sources, types of data, and data analysis capabilities available to develop decision-making tools for farmers to use in production.

“We knew that we had collected and would continue collecting data that could be used for good. We started with one simple question when evaluating the evolution of our organization and the technology we use: What benefits the farmer? We wanted to develop the next generation of tools for farmers to enable data analysis and decision-making that could lead to happier cows and better quality milk,” says Volden.

TINE knew it would have to change its approach to data and technology by becoming more data driven as an organization; that, in turn, would lead to better predict milk production and surface key data points related to a cow’s health and the quality of milk produced. Historically, TINE has used basic models to attempt to predict milk production and delivery per farm but faced problems with production predictability over different periods of time. This lack of long-term visibility and predictability could lead to significant problems. For example, in 2011, the entire country experienced a butter shortage because farmers underestimated the fat content that would be needed as a part of that year’s production.

Working with Crayon and AWS Technologies for Better Predictions

To identify the technologies and platforms that would help improve TINE’s insights, predictions, and analyses, TINE brought in the experts at Crayon, an AWS Partner Network (APN) Advanced Consulting Partner and AWS Machine Learning (ML) Competency Partner. Inmeta, a subsidiary of Crayon, worked directly with the customer, providing ideas for data-driven innovation.

“We deliver expertise in three distinct areas through our practice: AI consultancy, data engineering, and data science,” says Lars Joakim Nilsson, managing director of advanced analytics and big data at Inmeta. “When we began working with the TINE team, we wanted to help them identify the business challenges they could address by using ML. After starting by gathering feedback and insights from farmers themselves, TINE then identified the importance of helping farmers become more autonomous and self-driven by monitoring all aspects of the farm, including continuous monitoring of each individual cow.”

Resource-intensive processes like running its applications and storing data on-premises wasn’t a viable option for TINE if it wanted to continually evolve as a data-driven organization, so TINE, working with Crayon, conducted a technology review to identify a cloud provider that could help them move into the modern technology space.

“Based on the analysis, the TINE team chose to build on AWS,” says Nilsson. “They felt that the continuous innovation of AWS in technologies like IoT and ML, its cost models, and its flexibility would empower them to speed up their own innovation.”

The teams from TINE and Crayon first focused on prediction of milk production and deliveries from each cow, farm, and national level with a 24-month forecast—information that is critical for planning dairy production capacity and logistics. 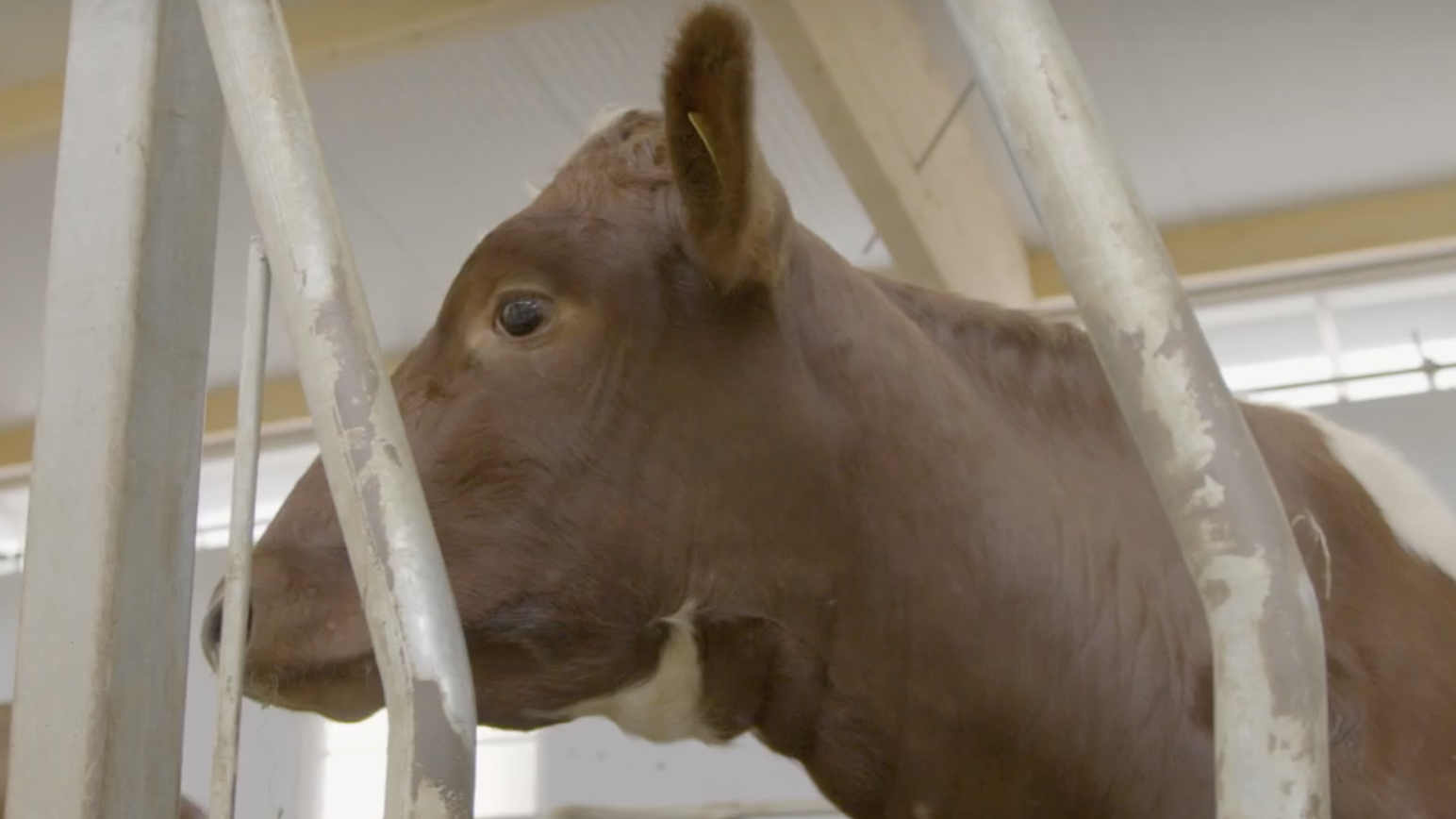 A Multi-phase Approach for Greater Predictability

First, the team focused on data readiness, availability, quality, and relevance. During this phase, Crayon concluded that TINE had useful and relevant data but lacked historical time series. “We were able to extract the history for each cow and farm from the existing data to create a dataset that’s useful for analysis,” says Nilsson.

Next, the team moved on to methodology and model selection. Crayon chose a simple model initially to demonstrate the use of a convolutional neural network to predict milk production based on the condition of the farm. During this phase, the teams concluded that the model and data were viable for milk production predictions.

Then, Crayon refined the modelling process. Based on the finding from the previous phase, the team chose a decision tree model and expanded it to predict the conditions on the farm in the future, which would support better and more accurate forecasting. The model, which uses an ML solution that runs on AWS, predicts cow births and the total number of cows in the herd in addition to milk production. “The model provides an automated and accurate prediction of milk production and allows for granularization of the predictions to enable improved production planning for dairy farms and their logistics,” says Nilsson. “The learnings from the model will also assist TINE and its farmers as they optimize milk production input and management, such as food concentrates.”

Finally, Crayon established a data lake optimized for analysis and ML models for prediction. This enables further improvements to the ML models while supporting ML initiatives for other applications within TINE. “TINE has begun to introduce IoT devices, such as sensors on cows, onto farms to further increase the data scope and better optimize its production processes,” says Nilsson.

“Based on the success from the milk prediction project, we are now working on several ML projects such as growth functions and lactation curves. Another aspect is that these models are also transferable to other types of animals such as goats and pigs,” says Nilsson.

Better Treatment for Animals—One Data Point at a Time

“Our dream is to change the world by using technology and data insights to change the way food is produced on a micro- and macro-level,” says Øyen Roald. “We want to make sure our customers are getting the best milk and dairy products possible. Data is helping us improve our raw material, which is milk.”

Nilsson notes that currently, TINE collects about 2.5 million data points for cows in Norway, covering aspects of the animal’s life such as parents, feeding, weight, growth, and other biodata.

“To support TINE’s mission, it's crucial to continue collecting as much data as possible throughout the farm,” Nilsson says. “To do this, IoT devices are being installed on every farm, milk robots are being used, and more data is being collected. Now they're looking at possibly collecting over 250 million data points for the cows annually. This is a huge amount of data to enable TINE’s life science team to provide even better solutions supporting its mission.”

TINE anticipates that the data it collects can even be used to reduce carbon footprint. For example, intelligence derived from collected data can be used to reduce the saturated fat in a cow’s diet and optimize a cow’s individual diet, leading to a reduction in the methane a cow produces through belching and flatulence. By helping reduce cow methane production, the cow’s carbon footprint is reduced.

TINE is also saving money by running its applications and using ML solutions on AWS. By mid-2018, TINE had saved 50 percent on its IT costs compared to its previous on-premises solution. The company has begun to drive faster development cycles since migrating to AWS and expects to increase its software development and delivery speed by 60 percent.

“The elasticity, scalability, and security of AWS are crucial for TINE, especially as the team looks to expand its global scope and build a new data platform and data lake architecture on a hyper scale level,” says Nilsson.

The TINE team believes they have an opportunity to develop an international business model based on the work they’ve done with IoT and ML in the Norwegian dairy industry.

“Norway has a strong track record for making good technology available internationally,” says Øyen Roald. “We’re continuing to modernize our technology and seeing interest from farmers in other countries. We want to see if we can expand from Norwegian farmers to other farmers in Europe, the United States, and around the world using our knowledge to optimize the same types of algorithms and tools available for other production types, such as beef and grain production.”

The team is currently building an open-data platform solution on AWS to collect more data to optimize the entire production process for dairy farmers while helping them create new revenue streams by being able to sell their own data. In fact, TINE has formally spun-off its data-driven venture into a separate company, Mimiro AS. The company created Mimiro to keep focus and momentum based on its data assets.

“Providing the world’s farmers with knowledge is what we are setting out to do in Mimiro,” says Øyen Roald. “There’s a lot we believe we can do with AWS and Crayon that’ll have a global impact and drive new business revenue streams for TINE. We're excited for the journey ahead.”

Crayon specializes in supporting customers across all industry sectors with complex local, regional, and global IT estates. Its mission is to help its clients navigate a complex technology landscape. Crayon is an Advanced AWS Partner Network (APN) Consulting Partner and an AWS Machine Learning (ML) Competency Partner. The company’s experts serve as trusted technical advisors to many of the world’s leading organizations.

Click here for a PDF version of this case study.