How Starling Bank is disrupting the banking industry

Come on banking, keep up

The public has come to expect service brands to have a strong mobile presence or an app at the very least, and in some cases to be completely mobile-first.

But this isn't news. Everyone's aware of how consumer behavior has changed to favor mobile channels since the evolution of smartphones in the late 2000s.

And yet, even though the world has been this way for over a decade, retail banking just hasn't kept pace. It's often a rigmarole to set up direct debits and standing orders through your mobile, and checking your balance can mean jumping through several hoops before you get to what you want.

These days, customers expect a better service from the banking sector. They've grown frustrated by its outdated ways, especially with so many other established industries like healthcare and retail shifting to mobile almost seamlessly.

In 2014, Starling decided to respond to that frustration. The startup saw a gap in the market for a business that could combine the convenience of a mobile-first user experience with the functionality of a fully licensed bank.

So it set out to build a new service.

Follow the timeline to see how Starling went from an idea in one banker's mind, to a fully UK-licensed banking platform that's disrupting one of the most established sectors in the world.

→ Running code without provisioning or managing servers through AWS Lambda

Starling Bank is disrupting the banking industry with its agile, mobile-only bank, which is powered by the AWS Cloud. Using an open API, Starling Bank’s customers can share their data easily, giving them access to high-value, personalised services. Watch Anne Boden, CEO and founder of Starling Bank, discuss how the company has used AWS to build a fast, scalable, compliant infrastructure and to release new features every day.

Watch Anne Boden, CEO and founder of Starling Bank, discuss how the company has used AWS to build a fast, scalable, compliant infrastructure and to release new features every day.

Automated Privilege Management via Slack with Starling Bank on AWS (6:20) 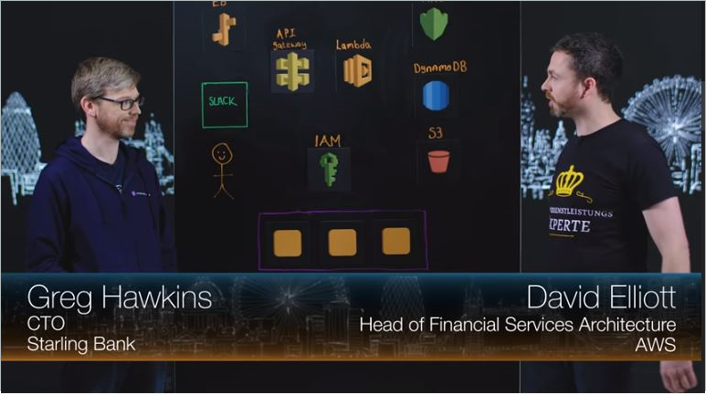 Starling Bank manage their privileges for releases on AWS via automation with Slack. Not only that but it's mostly serverless too!

Watch this video to learn how Starling Bank manage its privileges for releases on AWS via automation with Slack. Not only that but it's mostly serverless too! Learn more about This Is My Architecture.

A number of new features have been added to the customer-facing app Starling customers use to manage their current accounts, including:

Soon Starling customers will be able to:

If you want to create your own cloud business, we'll be with you all the way.

Find out how to get started on AWS.

Or get more information on how AWS Activate can help you fast-track through the early stages of development (and avoid the common pitfalls along the way).

You can also learn more about financial services workloads on AWS.

Learn about how Starling Bank started a challenger bank from scratch and find out how they are reinventing the banking model with our blogpost and podcast.

Read the Blog Listen to the Podcast