Amazon DynamoDB is a NoSQL database service that delivers consistent, single-digit millisecond latency at any scale.  With DynamoDB, you can create responsive mobile, console, and desktop games.

Amazon Lumberyard is a free, cross-platform, 3D game engine for developers to create the highest-quality games, connect their games to the vast compute and storage of the AWS Cloud, and engage fans on Twitch.

Cloud Canvas is a visual scripting interface to AWS services. With Cloud Canvas you can build connected game features that use Amazon DynamoDB.  Store and query game data such as player state, high scores, or world dynamic content.

Finland-based Supercell, founded in 2010 by six game-industry veterans, is one of the fastest-growing social game companies in the world. With more than 100 employees, its three games are massively successful, attracting tens of millions of players on iOS and Android devices every day. These games are Hay Day, a social farming game, and Clash of Clans and Boom Beach, which combine social resource management and strategic combat elements.  “Amazon DynamoDB is good for use cases like ours where scalability and speed are crucial,” says Sami Yliharju, services lead at Supercell. Read the story »

Frontier Developments used DynamoDB to deploy a cross-platform PC & Console MMO experience that is sold and distributed worldwide. Every action made by each of the 825,000 (and counting) Elite Dangerous players drives the combined game's story forward.

"We've got 400 billion star systems and we've got an ever-increasing number of players. ... We can be fairly confident about the number of reads and writes to that dataset because that's dependent on the players currently online, right at that very second.  And so it's a perfect fit for DynamoDB. ... We put it into DynamoDB and it takes care of the storage scaling for us." - Dav Stott, Senior Server Developer, Elite Dangerous.

Get started with Amazon DynamoDB on the AWS Free Tier

AWS Free Tier offers 25 GB of storage, up to 200 million requests per month with Amazon DynamoDB.

Build and Deploy Your Mobile Games with AWS

You can be up and running with DynamoDB in minutes with our Getting Started Guide.  Below are additional resources to help you launch your game on AWS: 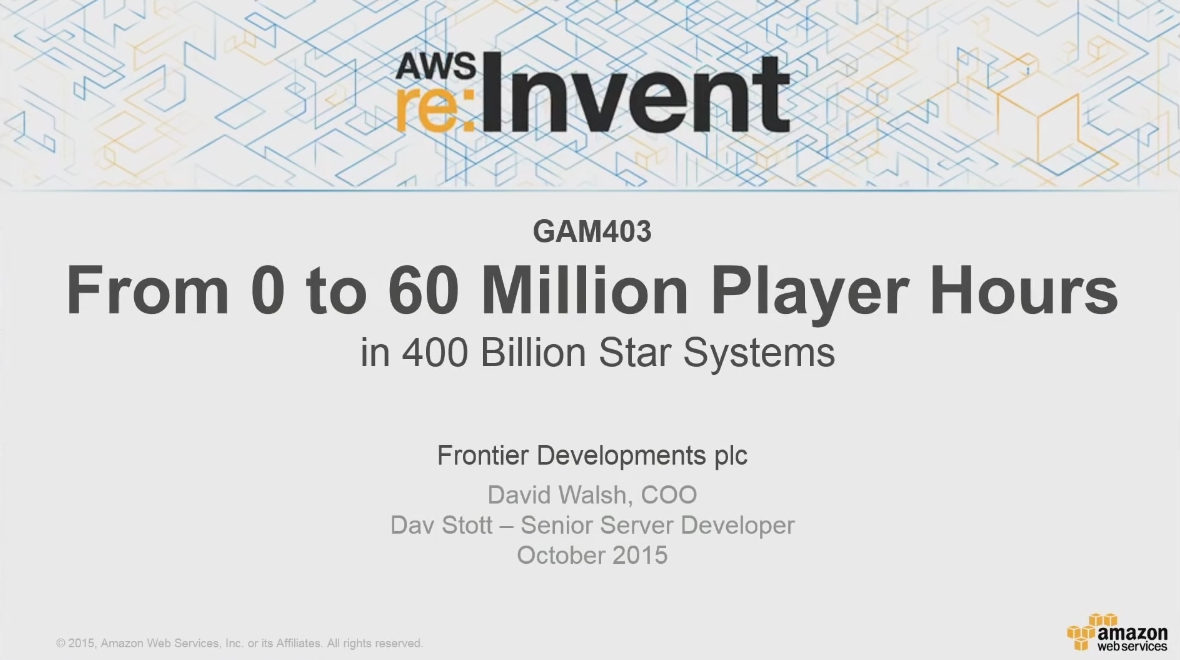 Elite Dangerous is a Kickstarter-backed, massive-scale space MMO by Frontier Games. With no prior experience with AWS, Frontier have used EC2, S3, RDS, DynamoDB, Elasticache, and CloudFormation to deploy a cross-platform PC & Console MMO experience that is sold and distributed worldwide. Every action made by each of the 825,000 (and counting) Elite Dangerous players drives the combined game's story forward, and impacts a live galactic commodities market running on EC2 and RDS in real-time. Frontier uses AWS to create a simulation of the entire 400 billion star systems of the Milky Way galaxy using physics engines running on Amazon EC2. Finally, learn how Elite distributes updates and DLC to game clients using Amazon S3 and Amazon CloudFront.

Build and Deploy Your Mobile Games with AWS (33:24)