At a high level, we accomplish the migration in three simple steps: 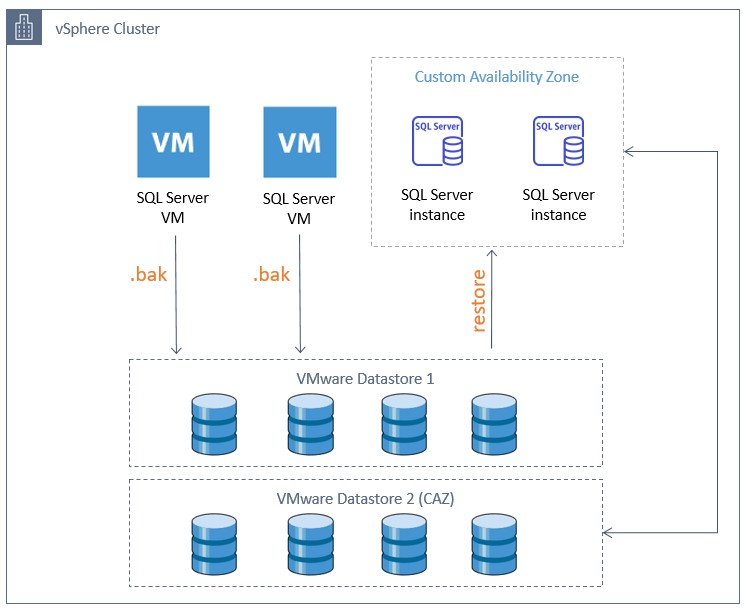 Before getting started, your VMware vSphere environment should have RDS on VMware onboarded with the following requirements met:

To migrate your on-premises SQL server database to RDS on VMware, complete the following steps:

The following screenshot shows that iSCSI is our datastore, migration-demo is a folder under the iSCSI datastore, and AdventureWorksLT2014.bak is the name of the full backup file.

You’re now ready to restore the database backup to the target RDS for SQL Server.

For this post, we use mssql-cli as the client tool for accessing RDS for SQL Server, but you can use SSMS or any other client tool of your choice.

For Amazon RDS to restore the database backup from the VMware datastore, you need to use the stored procedure rds_set_configuration to set up the vSphere environment information for the restore. You use the following parameters:

The following screenshot shows your output.

The result should contain the values you set using the stored procedure rds-set_configuration.

The result returns a task_id that you can use to track the progress of the task. The following screenshot shows that the task_id returned is 10.

We track the progress of our database restore task with the following code:

If required, you can cancel the task that’s in progress. When a task is in progress, the lifecycle column shows the value INPROGRESS. For example, you can run the following script to cancel the previous restore task if the task is still in progress:

When using this feature, you should be aware of the limitations (as of this writing):

The post showed how to migrate an on-premises SQL Server database to RDS on VMware using SQL Server native backup and restore and a VMware datastore.

Wanda He is a Sr.  Database  Specialist Solutions Architect at Amazon Web Services. She works with customers on design, deploy, and optimize relational databases on AWS.
View Comments