In October 2021, we released support for containers in AWS RoboMaker to make it easier for more customers to bring and run their simulations. In this blog, we show you how to use containers to build and package Robot Operating System (ROS) applications to run in AWS RoboMaker.

When AWS RoboMaker was first released, we created a purpose-built format for packaging ROS applications with dependencies called a bundle. However, we found customers often used a variety of simulation tools and custom software packages with different package managers, dependencies, build tools, and execution workflows along with their ROS stack. This made it difficult to build and package all of their applications and dependencies in a bundle. We also found many ROS developers continued to use first-generation catkin build tooling and/or already had container images of their simulation tools and robot applications.

With support for containers, customers can now bring their containerized ROS applications with few modifications. The new feature now supports applications written for any ROS release, the build tool of your choice, and a variety of simulation tools. This includes but is not limited to Ignition Gazebo, Drake, NVidia Isaac Sim and high fidelity rendering engines such as Unity and Unreal.

To bring applications into a RoboMaker simulation job in the past, customers would use colcon to build their ROS workspaces, then colcon bundle to create a single-file artifact with included dependencies. This file could be copied, extracted, and executed anywhere, including in AWS RoboMaker. However, the colcon bundle tool is designed to install dependencies with rosdep or pip. Therefore, any dependencies installed or configured outside of those package management tools would be missed.

In the walkthrough below, we will continue using colcon to build the ROS application workspace and rosdep to install application dependencies. However, instead of generating bundles, we will create Docker images that can be extended to support any additional software package and configuration required.

ROS developers often start with a workspace, a folder where developers modify, build, and install ROS packages. A ROS package contains libraries, datasets, configuration files, and anything else that comprises a useful software module. When using colcon, both ROS1 and ROS2 workspaces usually have the following structure:

When you run colcon build in a workspace for the first time, it will create and populate the build, install, and logs folder in the above directory structure. During a build, colcon will crawl through the workspace and look for ROS packages. They are identified and defined with a manifest file (package.xml) in each package directory. If an ROS package uses CMake, colcon will build and install the application following the instructions in the included CMakeLists.txt.

ROS developers also commonly use rosdep, a dependency management tool that crawls through the workspace and installs dependencies defined in each manifest (package.xml) file. The build and install instructions for most ROS packages end up being a variation of these five steps:

In this section, we will show how to build and package your ROS applications in a container image that can run in AWS RoboMaker, instead of using a bundle (tar) file. In this walkthrough, you will:

To run the following example below, you will need to have Docker, the AWS CLI, and the VCS Tool installed on your machine.

You will also need an AWS account with an IAM user or role with the following permissions:

Finally, you will need to know your account number and select a region to run the simulation in. AWS RoboMaker is supported in the following regions listed here.

Build a docker image from a ROS workspace for AWS RoboMaker

Congratulations! You have successfully built your Docker images and can now upload and run them in AWS RoboMaker.

Note: To use this approach with your own ROS application, run through the same process above and change the build arguments to match your application:

Containers used by AWS RoboMaker in a simulation job must be stored in Amazon Elastic Container Registry (ECR), a fully-managed container registry. Upload your container images in the steps following:

Congratulations! You have now pushed your ROS-based robot and simulation docker images to Amazon ECR.

In the final steps, we will create a new AWS RoboMaker simulation application and robot application referencing the respective Docker images in Amazon ECR. Ensure the environment variables from above are still set in your shell session.

Note: You can also run the below steps in the AWS Console, following the wizard. This way, resources such as the IAM role below will be automatically created for you. A similar example of this workflow is outlined in this blog. 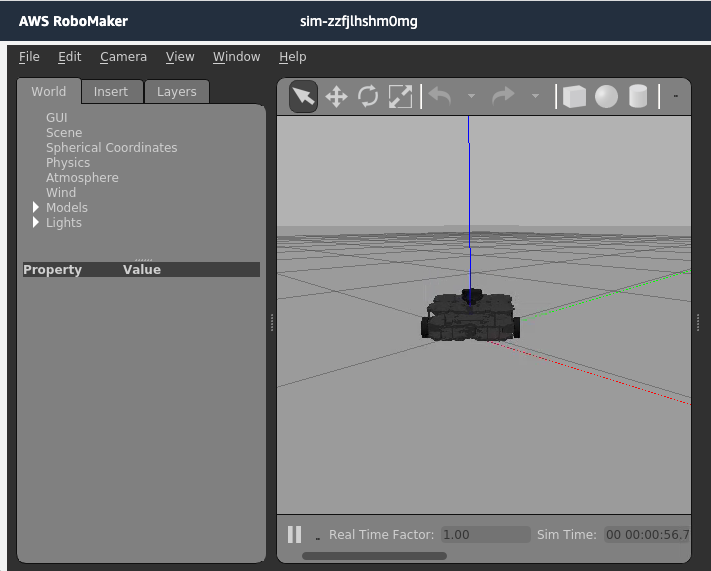 Congratulations! You can now build ROS applications, package them in Docker containers and run them using AWS RoboMaker.

Once complete, you can remove the resources you created with the following commands:

With this guide, you learned how to prepare ROS application Docker images for AWS RoboMaker. This approach is an alternative for using bundles and enables developers to customize the configuration of their containers and support a wide variety of different build tools, dependency management tools, and simulation engines.

We chose not to use bundles as the colcon build and install process with rosdep was sufficient when creating Docker images. However, colcon bundle is open source and available if you decide to continue using it with your robots. In this case, you can follow a similar approach outlined above to create Docker images for AWS RoboMaker. Simply remove the build stage, copy the bundle into the image and run the commands outlined in the bundle usage instructions.

We are excited to hear about the all of the different types of simulations ROS developers can now run with the new flexible container support.