Today we are marking the Virtual Private Cloud (VPC) as Generally Available, and we are also releasing a big bundle of new features (see my recent post, A New Approach to Amazon EC2 Networking for more information on the last batch of features including subnets, Internet access, and Network ACLs).

You can now build highly available AWS applications that run in multiple Availability Zones within a VPC, with multiple (redundant) VPN connections if you’d like. You can even create redundant VPCs. And, last but not least, you can do all of this in any AWS Region.

There’s a story behind the title of this post, and I thought I would share it with you. A few months ago the VPC Program Manager told me that they were working a project called “VPC Everywhere.” The team was working to make the VPC available in multiple Availability Zones of every AWS Region. I added “VPC Everywhere” to my TODO list, and that was that.

Last month he pinged me to let me know that VPC Everywhere was getting ready to launch, and to make sure that I was ready to publish a blog post at launch time.  I replied that I was ready to start, and asked him to confirm my understanding of what I had to talk about.

He replied that VPC Everywhere actually included quite a few new features and sent me the full list. Once I saw the list, I realized that I would need to set aside a lot more time in order to give this release the attention that it deserves. I have done so, and here’s my post!

Let’s take a look at each new feature!

General Availability
The “beta” tag is gone! During the beta period many AWS customers have used the VPC to create their own isolated networks within AWS. We’ve done our best to listen to their feedback and to use it to drive our product planning process.

VPC Everywhere
You can now create VPCs in any Availability Zone in any of the five AWS Regions (US East, US West, Europe, Singapore, or Tokyo). Going forward, we plan to make VPC available at launch time when we open up additional Regions (several of which are on the drawing board already). Data transfer between VPC and non-VPC instances in the same Region, regardless of Availability Zone, is charged at the usual rate of $0.01 per Gigabyte. 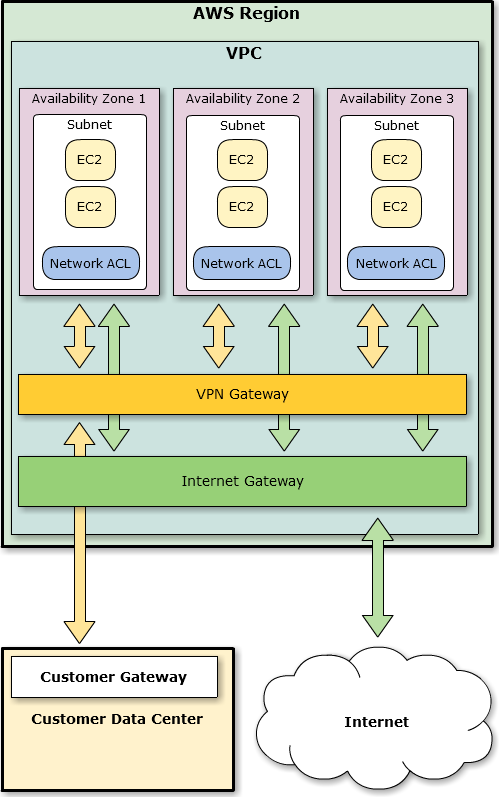 Multiple Connection Support
You can now create multiple VPN connections to a single VPC. You can use this new feature to configure a second Customer Gateway to create a redundant connection to the same external location. You can also use it to implement what is often described as a “branch office” scenario by creating VPN connections to multiple geographic locations. Here’s what that would look like:

By default you can create up to 10 connections per VPC. You can ask for more connections using the VPC Request Limit Increase form.

Multiple VPCs per Region
You can now create multiple, fully-independent VPCs in a single Region without having to use additional AWS accounts. You can, for example, create production networks, development networks, staging networks, and test networks as needed. At this point, each VPC is completely independent of all others, to the extent that multiple VPCs in a single account can even contain overlapping IP address ranges. However, we are aware of a number of interesting scenarios where it would be useful to peer two or more VPCs together, either within a single AWS account or across multiple accounts owned by different customers. We’re thinking about adding this functionality in a future release and your feedback would be very helpful.

By default you can create up to 5 VPCs. You can ask for additional VPCs using the VPC Request Limit Increase form.

VPN Connection Status
You can now  check the status of each of your VPN Connections from the command line or from the VPC tab of the AWS Management Console. The displayed information includes the state (Up, Down, or Error), descriptive error text, and the time of the last status change.

Third-Party Support
George Reese of enStratus emailed me last week to let me know that they are supporting VPC in all of the AWS Regions with their cloud management and governance product.

Bruno from Riverbed dropped me a note to tell me that their Cloud Steelhead WAN optimization product is now available in all of the AWS Regions and that it can be used within a VPC. Their product can be used to migrate data into and out of AWS and to move data between Regions.

Patrick from cohesiveFT sent along information about the vpcPLUS edition of their VPN-Cubed product. Among other things, you can use VPN-Cubed to federate VPCs running in multiple AWS Regions. The vpcPLUS page contains a number of very informative diagrams as well.

Update: Matt and Craig from Citrix wrote to let me know that Citrix XenApp is now available for use in all Regions. Per their blog post, “Users can connect directly to XenApp from anywhere they have an internet connection, and a single secure network backend tunnel connects XenApp to any on-premise company data that is required by the applications.” There’s also a more technical blog post and a list of AMI IDs here.

Keep Moving
Even after this feature-rich release, we still have plenty of work ahead of us. I won’t spill all the beans, but I will tell you that we are working to support Elastic MapReduce. Elastic Load Balancing, and the Relational Database Service inside of a VPC.

And there you have it – VPC Everywhere, and a lot more! What do you think?

PS – The diagrams in this post were created using a tool called Cacoo, a very nice, browser-based collaborative editing tool that was demo’ed to me on my most recent visit to Japan. It runs on AWS, of course.

Modified 10/23/2020 – In an effort to ensure a great experience, expired links in this post have been updated or removed from the original post.