The I/O Imperative
As I noted earlier this month, modern web and mobile applications are highly I/O dependent, storing and retrieving lots of data in order to deliver a rich and personalized experience.

In order to give you the I/O performance and the flexibility that you need to build these types of applications, we’ve released several new offerings in the last few months:

We know that you want more options for your I/O intensive applications, and we’re happy to oblige.

As you may know, the performance of a block storage device is commonly measured and quoted in a unit called IOPS, short for Input/Output Operations Per Second.

To put the numbers in this post into perspective, a disk drive spinning at 7,200 RPM can perform at 75 to 100 IOPS whereas a drive spinning at 15,000 RPM will deliver 175 to 210. The exact number will depend on a number of factors including the access pattern (random or sequential) and the amount of data transferred per read or write operation. We are focusing on improving the performance and consistency of database-backed applications that run on AWS by adding new EBS and EC2 options.

Here’s what we are announcing today:

EBS Provisioned IOPS
We released EBS in the summer of 2008. Since that time, our customers have very successfully used EBS to store the persistent data associated with their EC2 instances. We have found that there are certain workloads that require highly consistent IOPS, and others that require more IOPS on an absolute basis. Relational databases certainly qualify on both counts.

As a point of reference, a standard EBS volume will generally provide about 100 IOPS on average, with the ability to burst to hundreds of IOPS on a best-effort basis. Standard EBS volumes are great for applications with moderate or bursty I/O requirements as well as for boot volumes.

The new Provisioned IOPS EBS volume allows you to set the level of throughput that you need, and currently supports up to 1,000 IOPS (for 16K), with higher limits coming soon. For even higher performance, you can stripe multiple Provisioned IOPS volumes together, giving you the ability to deliver thousands of IOPS per logical volume to your EC2-powered application. These volumes deliver consistent performance and are well-suited to database storage, transaction processing, and other heavy random I/O loads. When attached to EBS-Optimized instances, these volumes are designed to deliver within 10% of their provisioned I/O performance 99.9% of the time.

You can create Provisioned IOPS EBS volumes from the AWS Management Console, the command line tools, or via the EC2 APIs. If you use the console, you need only select the Provisioned IOPS volume type and then enter the desired number of IOPS: 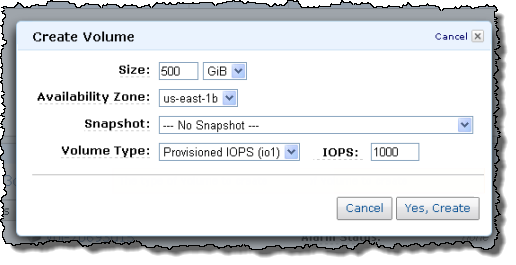 You can create a provisioned equivalent of your existing EBS volume by suspending all I/O to your volume, creating a snapshot, and then creating a Provisioned IOPS volume using the snapshot as a starting point.

EBS-Optimized EC2 Instances
For maximum performance and to fully utilize the IOPS provisioned on an EBS volume, you can now request the launch of EBS Optimized EC2 instances. An EBS-Optimized instance is provisioned with dedicated throughput to EBS. The m1.large, m1.xlarge, and m2.4xlarge instance types are currently available as EBS-Optimized instances. m1.large instances can transfer data to and from EBS at a rate of 500 Mbit/second; m1.xlarge and m2.4xlarge instances can transfer data at a rate of 1000 Mbit/second. This is additional throughput, and doesn’t affect other general purpose network throughput already available on the instance.

There is an additional hourly charge for the EBS-Optimized instances: $0.025 for the m1.large and $0.05 for the m1.xlarge and m2.4xlarge instance types.

You can upgrade your EC2 instances to EBS-Optimized instances as follows:

And Here’s Arun
I spoke with Arun Sundaram, a Product Manager on the AWS Storage team, to learn more about these two features. Here’s what he had to say:

And That’s That
These new features are available for you to use today. Give them a whirl, and let me know what you think!