From Raspberry Pi to Supercomputers to the Cloud: The Linux Operating System

Matthew Freeman and Luis Daniel Soto are back talking about the use of Linux through the AWS Marketplace.
– Ana

Linux is widely used in corporations now as the basis for everything from file servers to web servers to network security servers. The no-cost as well as commercial availability of distributions makes it an obvious choice in many scenarios. Distributions of Linux now power machines as small as the tiny Raspberry Pi to the largest supercomputers in the world. There is a wide variety of minimal and security hardened distributions, some of them designed for GPU workloads.

Even more compelling is the use of Linux in cloud-based infrastructures. Its comparatively lightweight architecture, flexibility, and options for customizing it make Linux ideal as a choice for permanent network infrastructures in the cloud, as well as specialized uses such as temporary high-performance server farms that handle computational loads for scientific research. As a demonstration of their own commitment to the Linux platform, AWS developed and continues to maintain their own version of Linux that is tightly coupled with AWS services.

AWS has been a partner to the Linux and Open Source Communities through AWS Marketplace:

Selecting a Linux Distribution for Your Company
If you’re new to Linux, the dizzying array of distributions can be overwhelming. Deciding which distribution to use depends on a lot of different factors, and customers tell us that the following considerations are important to them:

By examining your responses to each of these areas, you can narrow the list of possible Linux distributions to suit your business needs.

Linux in AWS Marketplace
AWS Marketplace is a great place to locate and begin using Linux distributions along with the top applications that run on them. You can deploy different versions of the distributions from this online store, and AWS scans the catalog daily for security, if we found an issue we notify you — this increases your speed. Scans are run continuously to identify vulnerabilities. AWS notifies customers of any issues found and works with experts to find work-arounds and updates. In addition to support provided by the sellers, the AWS Forums are a great place to ask questions about using Linux on AWS by setting up a free account on the forum. You can also get further details about Linux on AWS from the AWS Documentation.

CentOS Versions 7, 6.5, and 6
The CentOS Project is a community-driven, free software effort focused on delivering a robust open source ecosystem. CentOS is derived from the sources of Red Hat Enterprise Linux (RHEL), and it aims to be functionally compatible with RHEL. CentOS Linux is no-cost to use, and free to redistribute. For users, CentOS offers a consistent, manageable platform that suits a wide variety of deployments. For open source communities, it offers a solid, predictable base to build upon, along with extensive resources to build, test, release, and maintain their code. AWS has several CentOS AMIs that you can launch to take advantage of the stability and widespread use of this distribution.

Debian GNU Linux
Debian GNU/Linux, which includes the GNU OS tools and Linux kernel, is a popular and influential Linux distribution. Users have access to repositories containing thousands of software packages ready for installation and use. Debian is known for relatively strict adherence to the philosophies of Unix and free software as well as using collaborative software development and testing processes. It is popular as a web server operating system. Debian officially contains only free software, but non-free software can be downloaded from the Debian repositories and installed. Debian focuses on stability and security, and is used as a base for many other distributions. AWS has AMIs for Debian available for launch immediately.

Amazon Linux AMI
Amazon Linux is a supported and maintained Linux image provided by AWS. Amazon EC2 Container Service makes it easy to manage Docker containers at scale by providing a centralized service that includes programmatic access to the complete state of the containers and Amazon EC2 instances in the cluster, schedules containers in the proper location, and uses familiar Amazon EC2 features like security groups, Amazon EBS volumes, and IAM roles. Amazon ECS allows you to make containers a foundational building block for your applications by eliminating the need to run a cluster manager, and by providing programmatic access to the full state of your cluster.

Getting Started with Linux on AWS Marketplace
You can view a list hundreds of Linux offerings by simply selecting the Operating System category from the Shop All Categories link on the AWS Marketplace home screen. 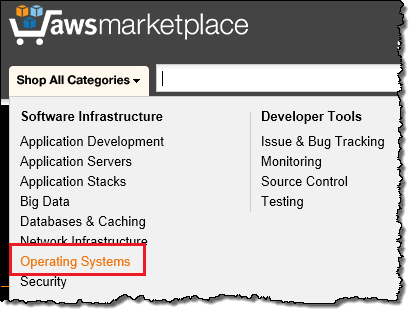 From there you can select your preferred distribution and browse the available offerings: 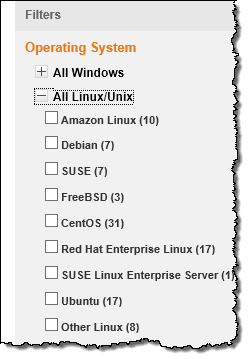 Most offerings include the ability to launch using 1-Click, so your Linux server can be up and running in minutes.

Flexibility with Pay-As-You-Go Pricing
You pay Amazon EC2 usage costs plus per hour (or per month or annual) and, if applicable, commercial Linux cost for certain distributions directly through your AWS account. You can see in advance what your costs will be, depending on the instance type you select. As a result, using AWS Marketplace is one of the fastest and easiest ways to launch your Linux solution.

Visit http://aws.amazon.com/mp/linux to learn more about Linux on AWS Marketplace.