Earlier today, after a hard-fought battle with pancreatic cancer that lasted nearly two years, my friend and colleague Mike Culver passed away leaving his wife and adult children behind. 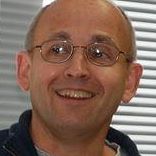 Mike was well known within the AWS community. He joined my team in the spring of 2006 and went to work right away. Using his business training and experience as a starting point, he decided to make sure that his audiences understood that the cloud was as much about business value as it was about mere bits and bytes. We shared an office during the early days. One day he drew a rough (yet functionally complete) draft of the following chart on our white board: 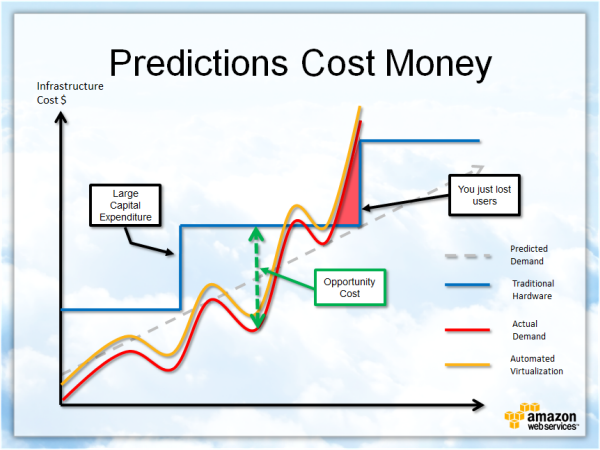 As you can see, Mike captured the business value of cloud computing in a single diagram. I have used this diagram in hundreds of presentations since that time, as have many of my colleagues.

Mike thoroughly enjoyed his role as an evangelist. To quote from his LinkedIn profile:

There is nothing more exciting than telling the world about the amazing things that they can do with Amazon Web Services. So it was easy to travel the world, telling anyone who would listen, about this new thing known as “the cloud.”

After almost four intense years as an AWS evangelist, Mike turned his attention to some new challenges that arose as the organization grew. He managed Strategic Alliances and Partner Training, and retired in the Spring of 2014 after serving as a Professional Services Consultant for over two years. It was difficult for Mike to retire but he had no choice due to his failing health. To quote from his farewell email:

It’s the only job I’ve ever had where I set the alarm for 5:30 AM and still wake up early to get to the office. So it is going to be super tough to go to “you can’t work” cold turkey.

As I noted earlier, Mike and I shared an office for several years. We found that we had a lot in common – a low tolerance for nonsense, a passion for evangelism, and a strong understanding of the value of good family ties. I learned a lot from listening to him and by watching him work. Even though I nominally managed him, I really did nothing more than sign his expense reports and take care of his annual reviews. He knew what had to be done, and he did it without bragging. End of story.

In addition to his work at Amazon, Mike had the time and the energy to serve on the Advisory Board for the Cloud Computing program offered by University of Washington’s department of Professional and Continuing Education. Even as his health flagged and travel became difficult, Mike showed up for every meeting and forcefully (yet with unfailing politeness) argued for his position.

Two weeks ago I was on a conference call with Mike and one of my AWS colleagues. Even though he was officially retired, heavily medicated, debilitated from his cancer, and near the end of his journey, he still refused to give up and continued to advocate for a stronger AWS presence in some important markets.

Mike had a lifelong passion for aviation and owned a shiny silver 1947 Luscombe 8E for many years. Although I never had the opportunity to fly with him, it was clear from our conversations that he would be calm, cool, and collected as a pilot, regardless of the situation. Sadly, Mike’s health began to fail before he was able to finish assembling the kit plane (a Van’s RV-9) that he had started working on a couple of years earlier. Although the words “kit” and “plane” don’t always instill confidence when used together, Mike’s well-documented craftsmanship was clearly second to none and I would have been honored to sit beside him.

To Mike’s wife and children, I can tell you that he loved you all very much, perhaps more than he ever told you. Your names often came up in our conversations and his affection for each and every one of you was obvious. He worried about you, he thought about you, he was proud of your accomplishments, and he wanted nothing but the best for you.

I’m not sure what else I can tell you about Mike. He was an awesome guy and it was a privilege to be able to work side-by-side with him. Rest in peace, my good friend. You will be missed by everyone who knew you.