Over the summer months, we’d like to share a few stories from startups around the world: what are they working on and how they are using the cloud to get things done. Today, we’re profiling Sportaneous from New York City! 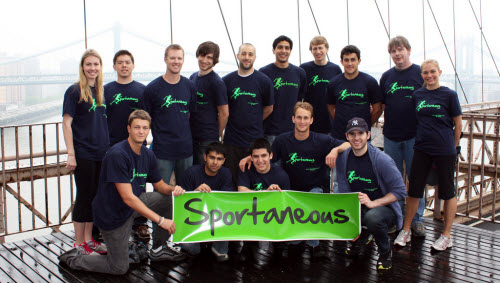 The Story
I first learned about Sportaneous after reading about NYC Big Apps, an application contest launched by the city of New York, BigApps is a competition that is organized by Mayor Bloomberg. Its goal is to reward apps that improve NYC by using public data sets released by the local government.

Sportaneous jumped at the opportunity to enter the contest because their applications already offered users a database of public sports facilities to choose from, many of which are obtained from Park & Recreation data. Sportaneous makes it easy for busy people to play sports or engage in group fitness activities. Through the Sportaneous mobile app and website, a person can quickly view all sports games and fitness activities that have been proposed in her surrounding neighborhoods. The user can choose to join whichever game best fits her schedule, location, and skill level. Alternatively, a Sportaneous user may spontaneously propose a game herself (for example, a beginner soccer game in Central Park three hours from now), which allows all Sportaneous users in the Manhattan area to join the game until the maximum number of players has been reached.

From the over 50 applications that entered the NYC BigApps competition, Sportaneous won two of the main awards: the Popular Vote Grand Prize, based on over 9,500 people voting for their favorite app in the contest and the Second Overall Grand Prize voted on by a panel of very distinguished judges, including Jack Dorsey (Co-founder, Twitter), Naveen Selvadurai (Co-founder, Foursquare) and prominent tech investors in NYC.

Here is a video of Sportaneous in action:

From the CEO
I spoke to Omar Haroun, CEO and Co-Founder at Sportaneous about how they got started and ended up using AWS. He shared a bit about their humble beginnings and how their growth plans continued to include AWS:

We initially bootstrapped the service using a single EC2 instance.  We used an off-the-shelf AMI with a backing EBS volume, so we could fine-tune the machine’s configuration as we started higher traffic numbers.  We wanted a low cost, reliable hosting option which we knew had the ability to scale gracefully (and very quickly) when needed.  EC2 allowed us to get up and running in a matter of hours, without forcing any design compromises which we’d later regret.

As traffic has grown and we’ve begun preparing for a public launch, we’re planning to move our MySQL databases to RDS and to take advantage of some additional ELB features (including SSL termination). RDS was also a no-brainer.  We realize that any data-loss event would be devastating to our momentum, but we don’t have the resources for a full time DBA (or even a database expert).  RDS and its cross-AZ replication takes a huge amount of pressure off of our shoulders.

Behind the Scenes
I asked Omar to tell me a bit about the technology behind Sportaneous. Here’s what he told me:

He wrapped up on a very positive note:

Using EC2 with off the shelf AMIs, we went from zero to scalable, performant web app in under two hours.