Last month, we announced the general availability of the Amazon Elastic Container Service (Amazon ECS) optimized Bottlerocket AMI. Today, I would like to focus on the Bottlerocket ECS Updater. The ECS Updater is a service you can install into your ECS cluster that helps you keep your Bottlerocket container instances up to date.

When Bottlerocket downloads an update from The Update Framework repository (TUF), and it is ready to install, the update is written to a secondary partition. Bottlerocket marks the newly updated partition as the primary partition. It then reboots into the new primary partition with the new version of Bottlerocket, and leaves the old version of the image available as a secondary-inactive partition. Bottlerocket is also equipped with a separate, writable portion of the filesystem that is designed for persistent user data, like container images and volumes. This makes updates more predictable and a standard mechanism that can be used for quickly rolling back, if you experience a problem.

Bottlerocket utilizes waves to stagger the deployments across your fleet of instances. Waves are the mechanism Bottlerocket uses to reduce the potential impact of bugs in an update. By default, Bottlerocket updates become visible to a progressively larger subset of hosts over the course of time to reduce the risk that a bug affects your whole cluster at once.

These actions are executed as part of the automated process (which we will go into shortly) by running the following apiclient commands:

The following diagram describes the process.

Because updates require a reboot and can be disruptive to running applications, our customers have asked for tighter integration between Bottlerocket and Amazon ECS, specifically for the option to make Amazon ECS more “Bottlerocket-aware,” and make use of container instance draining. This allows you to maintain maximum availability of your application without incurring downtime during operating system updates. It also allows you to perform regular and scheduled maintenance on the underlying operating system when needed.

The ECS Updater is an application that can be deployed as an AWS CloudFormation template. The template creates the following resources in your account. 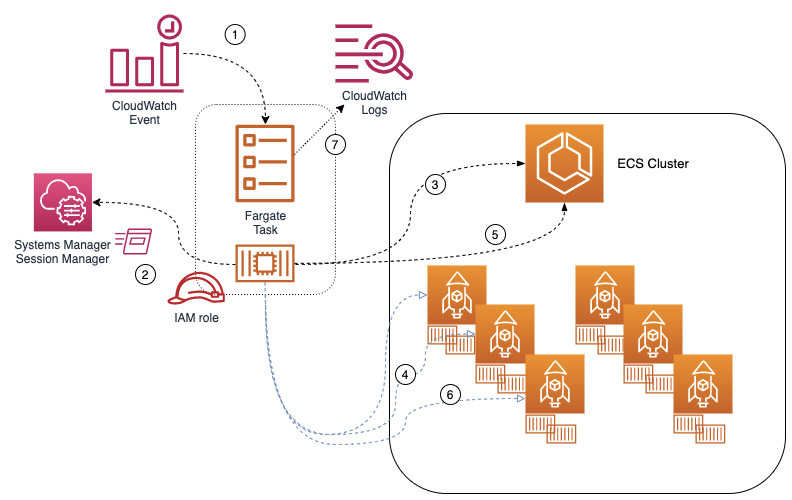 Let’s have a look how this is done in practice.

I have an ECS cluster deployed with EC2 instances running Bottlerocket v1.1.1. If you need guidance on how to get started with Bottlerocket, you can find it here.

In my case, my cluster is named maishsk-bottlerocket, my CloudWatch Logs log group is bottlerocket-test, and the subnet that has internet access for the Fargate task is subnet-bc8993e6.

Here you can see that my ECS cluster has three EC2 instances and each of them are running two ECS tasks.

To see the version of Bottlerocket that is on the instances, we need to go into the instance itself. Go to EC2 in the AWS Management Console and select one of your instances → Actions → Connect

You can also execute an SSM document that runs apiclient -u /os against multiple hosts at the same time rather than one by one, if you would like.

By default, the ECS Updater will run once every 12 hours.

Let’s go through the logs to see what happens when the task is triggered. The logs will be in the Amazon CloudWatch Logs log group that you provided when you created the CloudFormation stack.

The updater lists the instances in the cluster and then filters these instances for only those running Bottlerocket, and in my case, it found three.

It runs the SSM document on each of the instances to check for an update and then instructs the ECS API to drain the containers from the instance.

Once the tasks have been drained for the instance, the update begins.

If you would like, you can verify this by connecting again to the instance through EC2.

The process continues until all the nodes in the cluster are updated.

Bottlerocket’s components are open-source as is its roadmap. Our intent is for Bottlerocket to be a collaborative community project, and we invite you to get involved, provide your feedback and contribute directly. Check out our GitHub repository for discussion via issues and submit your contributions via a pull request.

Please join the #bottlerocket channel for informal interaction in the AWS Developer Slack. You can sign up to this channel here.