Companies want to go fast; they need to deploy more often, more reliably, and preferably with less overhead. GitOps is a fast and secure method for developers to manage and update complex applications and infrastructure running in Kubernetes.

GitOps is an operations and application deployment workflow and a set of best practices for managing both infrastructure and deployments for cloud-native applications. This post is divided into two parts. In the first part, we provide you with the history of GitOps as well as a description of how it works and what the benefits are. In the second part, you can try it out for yourself with a hands-on tutorial that describes how to set up a continuous deployment pipeline with Flux to Amazon Elastic Kubernetes Service (Amazon EKS).

Coined by Weaveworks CEO, Alexis Richardson, GitOps is an operating model for Kubernetes and other cloud native technologies. It provides a set of best practices that unifies deployment, management, and monitoring for clusters and applications.  Another way to put it is: a path towards a developer experience for managing applications; where end-to-end CI and CD pipelines and Git workflows are applied to both operations, and development.

For GitOps to work in practice, your team will need these principles in place:

With the declarative definitions of your system stored in Git, and serving as your canonical source of truth, there is a single place from which your cluster can be managed. This also trivializes rollbacks and roll forwards to take you back to a ‘good state’ if needed. With Git’s excellent security guarantees, SSH key signed commits to enforce strong security guarantees about authorship as well as the code’s provenance.

#3. The ability for changes to be automatically applied

Once the desired system state is kept in Git, the next step is the ability to automatically reconcile changes with your system.  What’s significant about this is that you don’t need specific cluster credentials to make a change. With GitOps, there is a separated environment that the state definition lives outside of. This allows your team to separate what they actually do, for example, deploying code from how they are going to do it, for example, configuring the cluster to deploy the code.

With the desired state of your entire system kept under version control, and running in the cluster, you can now employ software controllers to bring the actual state of the cluster in alignment with that desired state, and inform you whenever reality doesn’t match your expectations. The use of a GitOps controller like Flux in combination with these software agents ensures that your entire system is self-healing. And by self-healing, we don’t mean when nodes or pods fail, those are handled by Kubernetes, but in a broader sense, in the case of human error, for example. In this case, software agents act as the feedback and control loop for your operations.

An essential component of GitOps is feedback and control.  But what is meant exactly by that? In order to have control so that developers can ship faster, they need observability built into their deployment workflows. Built in observability allows developers to experiment and make informed decisions on real-time data. For example, when a deployment is being rolled out, a final health check can be made against your running cluster before committing to that update. Or maybe that update didn’t go as planned and needs to be rolled back to a good state. With a feedback control loop, you can effectively answer the following questions:

While Git is the source of truth for the desired state of the system, observability is the benchmark for the actual production state of the running system. GitOps takes advantage of both to manage both applications and infrastructure to increase your team’s productivity. 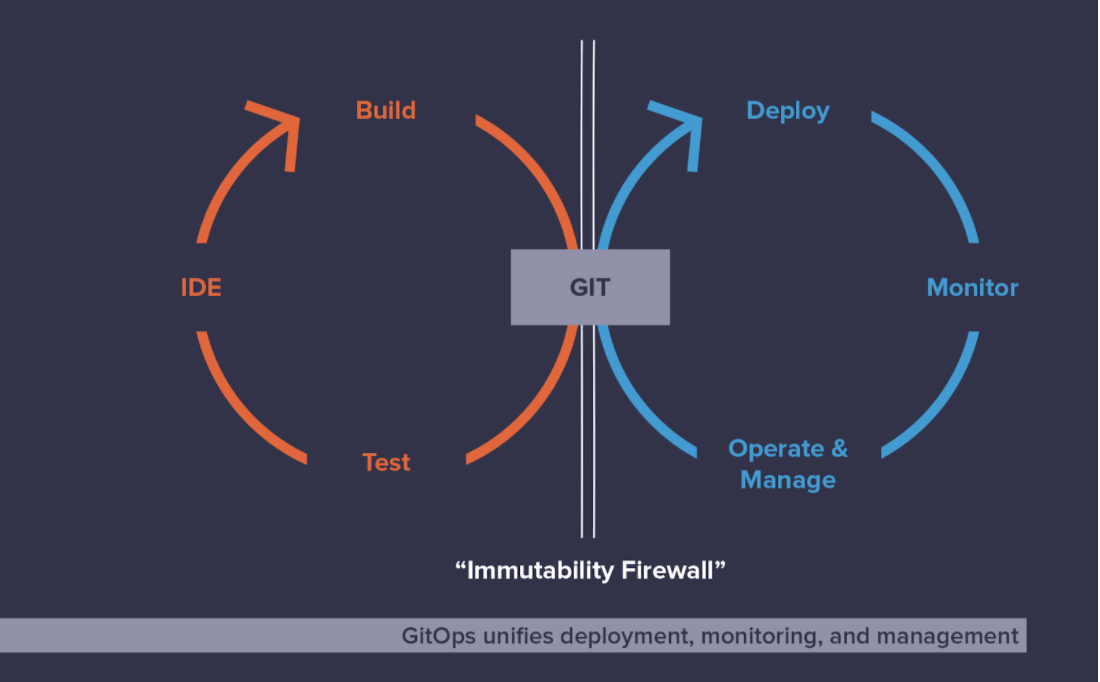 With GitOps, your organization immediately benefits with the following:

Stronger security guarantees: Git’s strong correctness and security guarantees, backed by Git’s  strong cryptography used to track and manage changes, as well as the ability to SSH sign changes to prove authorship and origin are key to a correct and secure definition of the cluster’s desired state. If a security breach does occur, the immutable and auditable source of truth can be used to recreate a new system independently of the compromised one, reducing downtime and allowing for a much better incident response and more effective disaster recovery to meet compliance.

Also, the separation of responsibility between integrating and testing software, then releasing it to a production environment embodies the security principle of least privilege, reducing the impact of compromise and providing a smaller attack surface.

Increased speed and productivity: continuous deployment automation with an integrated feedback and control loop speeds up your mean time to deployment by supporting more frequent releases. Declarative definitions kept in Git enable developers to use familiar workflows, reducing the time it takes to spin up new development or test environments to deploy new features. Your teams can ship more changes per day and this translates into faster turnaround for new features and functionality to the customer.

Reduced mean time to detect and mean time to recovery: the amount of time it takes to recover from a cluster meltdown is also decreased with GitOps best practices. With Git’s built in capability to revert/rollback and fork, you gain stable and reproducible rollbacks. Since your entire system is described in Git, you have a single source of truth for what to recover after a cluster failure, reducing your meantime to recovery (MTTR) from hours or days to minutes. GitOps provides real time feedback and control loops. In conjunction with other tools like Prometheus for observability and Jaeger for end-to-end tracing, problems can be detected and tracked down, preventing entire cluster meltdowns more quickly, and overall reducing mean time to detect (MTTD) and mean time to locate (MTTL).

Improved stability and reliability: due to GitOps providing a single operating model for making infrastructure and apps, you have consistent end-to-end workflows across your entire organization. Not only are your continuous integration and continuous deployment pipelines all driven by pull requests, but your operations tasks are also fully reproducible through Git.

Easier compliance and auditing: by incorporating Git as part of your cluster management strategy, you automatically gain a convenient audit trail of who did what and when for all cluster changes outside of Kubernetes that can be used to meet SOC 2 compliance and also ensure stability.

GitOps implements a Kubernetes reconciler like Flux that listens for and synchronizes deployments to your Kubernetes cluster. Flux makes use of a set of controllers to reconcile divergences that are significant in two ways:

The Flux controllers together with a set of custom Kubernetes resources act on behalf of the cluster. It listens to events relating to custom resource changes, and then applies those changes (depending on the deployment policy) or it can send an alert indicating a divergence from the desired state kept in Git. The GitOps pipeline ensures that what’s in Git matches what’s running in the cluster.

GitOps is a more secure way to deploy changes

Docker images are pulled into the cluster using Read Only access to the container registry.  Your CI tool is not granted cluster privileges, reducing attack surface and eliminating significant security risks to your pipeline (known as common attack vectors). With GitOps, cluster credentials are kept within the domain of the cluster and not embedded within bespoke scripts outside of the cluster.

The table below shows how read/write privileges are distributed between the cluster, your CI and CD tooling, and the container repository, as well as provides your team with a more secure method of creating updates to Kubernetes.

In this part one of a two part series, we set out to provide an overview of what GitOps is and how it can be applied to both infrastructure updates and application deployments. In the next post, we’ll provide a step by step tutorial on building a GitOps pipeline with Amazon Elastic Kubernetes Service (EKS).