Cloud Native CI/CD with Tekton and ArgoCD on AWS

With the ongoing popularity and adoption of container orchestrators such as Kubernetes, more and more cloud-native applications are built on top of it. Besides business applications, companies are migrating their infrastructure-related components such as CI/CD systems as well.

But are those systems ready for such modern platforms? The answer depends. Clearly, most of the existing CI/CD systems weren’t built directly for Kubernetes and the cloud-native world.

This blog post should give a quick introduction to how to use the Kubernetes native CI/CD system Tekton on top of Amazon Elastic Kubernetes Service (Amazon EKS) and its integration with various developer-related AWS services.

We will start with a quick introduction about Tekton and an explanation of some key concepts. The second part contains a practical example that walks the reader through the process in order to build and deploy a Spring Boot-based web application with a Tekton native CI/CD Pipeline. The sample code provided should enable you to build more sophisticated Pipelines for your unique requirements.

Tekton is an open-source project which allows you to build cloud-native CI/CD systems on top of Kubernetes. A good definition of what makes an application cloud native has been defined by the Cloud Native Computing Foundation.

Compared to other CI/CD solutions, Tekton runs natively on top of Kubernetes. It makes use of custom resource definitions (CRDs) in order to register common CI/CD building blocks as native Kubernetes resources. Since Kubernetes 1.16, it is possible to introduce custom resources that extend the Kubernetes API. Similar to existing resources such as Pods or Deployments, you can register your own objects with the help of CRDs. In addition to handling these new resources, you have to develop your own business logic in order to process them. These applications are deployed into Kubernetes as custom controllers.

In a nutshell, it is just a set of custom controllers developed with cloud-native properties in mind and a few custom resources. Together these custom resources define the building blocks for your CI/CD Pipelines.

Tekton is designed as a modular system that consists of multiple components. This allows you to choose only the components that are required for your specific use case. The basic one is called Tekton Pipelines, which contains the main custom resources and controllers in order to build Pipelines. We will cover the most important custom resources out of this component in the subsequent section.

Further, there needs to be a way that Tekton can trigger a Pipeline based on code changes made to a version control system. This capability is covered within another component named Tekton Triggers. The CRDs of this project allow you to set up an event listener that listens for incoming Git events, such as pull requests or commits made to your codebase. After extraction of the necessary fields of the payload provided by the webhook, a Pipeline run can be automatically instantiated.

Finally, there is the Tekton Dashboard project which provides a web UI in order to visualize all of your Tekton resources and keep track of current and recent Pipeline executions.

The deployment of these projects to a Kubernetes cluster installs multiple custom resources. This blog post shows only a subset of the available resources. Therefore the following section covers only the most basic ones that are part of the Tekton Pipelines project:

The upcoming section contains an example of how you can use Tekton in order to build and deploy a Spring Boot-based web application. Please find below the architecture diagram and explanation of each Pipeline Task. 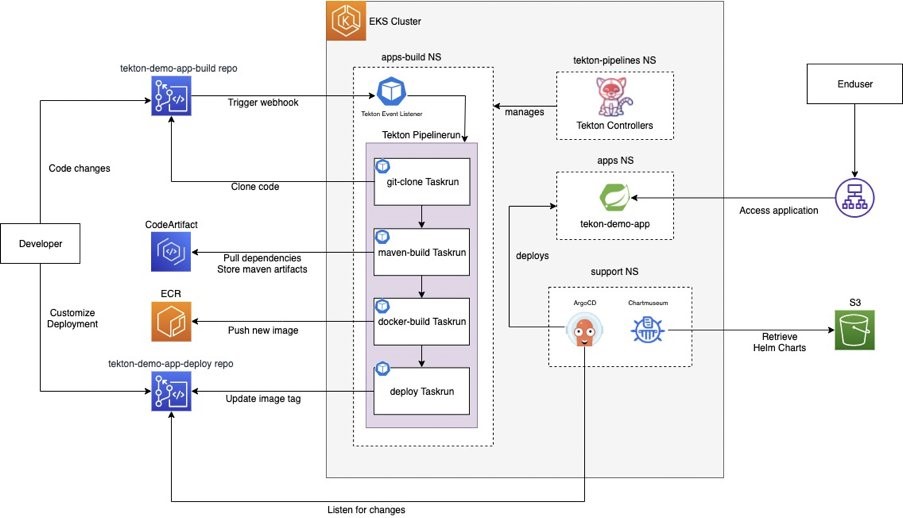 The Pipeline is named tekton-demo-spring-boot and contains the following stages:

This tutorial demonstrates a Pipeline run that covers an application build and deployment to EKS.

For this demo, we need to set up an EKS cluster and various AWS services. We suggest creating a dedicated AWS account for this demo.

Before you continue with the demo steps, please make sure that you have completed all prerequisites outlined within the README.md of the following repository:

Please make sure that you have installed all of the required tools and a dedicated EKS cluster. We recommend creating a fresh EKS cluster with the command line tool eksctl. In order to help you with the cluster provisioning, we have provided a sample cluster config in the directory (eks-cluster-template.yaml).

Once you have created the cluster and installed the required tooling, please execute the install script that you can find in the repository (install.sh).

After successful installation with the provided script, you should see an output that contains various output parameters, which will be referenced through the demo. 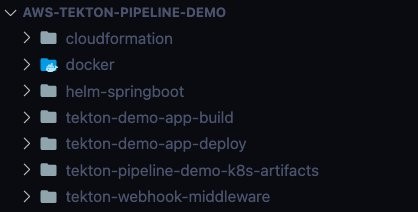 The provided code repository contains various files required to set up the demo environment. Please find below a short summary of the outlined folders:

Execution of the Demo

1. Show the current state of the web application

Locate the load balancer URL (DEMO APP) that points to the demo application and enter it into a web browser of your choice. Your browser should display a simple web application with the following content:

In order to simulate a small change to the application, we are going to change the text color to match the color of the Tekton logo.

2. Make a simple change to the application

Within the output of the install script, locate the url of the source repo and the required Git credentials. Clone the repo into a destination with the following command:

After successfully cloning the repo, open the file greeting.html located under src/main/resources/templates and comment the previous h1 Tag (Line Nr. 13). Finally, add the h1 tag with the inline CSS gradient. The comments within the file should provide further guidance.

Save your changes and commit them with the following commands:

Locate the load balancer URL (TEKTON DASHBOARD) that points to the Tekton Dashboard and enter it in a browser of your choice. From the left menu of the Dashboard, select PipelineRuns to see all your running jobs. You should be able to see that Tekton has started a build after our recent commit. Tekton executes the Tasks in sequential order. The running Task is highlighted with a blue indicator. Feel free to explore the build logs on the right side of the screen.

In addition, you can verify the ongoing activity within the EKS cluster. Use the following command to monitor the pods created by Tekton:

After a few minutes, the build should complete successfully with a green status indicator.

4. Verify the new version of the JAR artifact within AWS CodeArtifact

Switch to your AWS account and select the AWS CodeArtifact service. Select the com.amazon:tekton-demo package within the tekton-demo-repository repository. Now you should see a new version of the package with the recent git commit SHA.

Switch to your AWS account and select the Amazon ECR service. Open tekton-demo-app from the list of private repositories. Now you should see a new image tag that contains the recent git commit SHA as its identifier.

Locate the load balancer URL that points to the demo application and enter it in a web browser of your choice. You should now see the same application as in step 1, but this time with the matching text color.

Congratulations! You have successfully completed a CI/CD Pipeline execution with Tekton. Feel free to have a look at the various Kubernetes manifests that were used to build this Pipeline. You can start your exploration within the tekton-pipeline-demo-k8s-artifacts/templates folder of the cloned repository.

Please follow the instructions provided in the README file within the Github repository in order to clean up any provisioned resources.

We started this blog with a quick overview of Tekton and finished it with a practical example where we built and deployed a simple web application. Although we have a functional Pipeline that is integrated with a couple of AWS services, the topics covered here are only the tip of the iceberg. Tekton gives you solid building blocks to build complex and comprehensive Pipelines for a cloud-native world. I encourage you to visit the official documentation to learn more about these building blocks and the official GitHub repository to discover new and upcoming projects within the Tekton ecosystem:

Feel free to extend the Pipeline and add additional build stages. I would be happy to see what you have built with Tekton on top of EKS.