Getting started with task networking on Amazon ECS with Windows containers

In this post, we will walk through the steps for using awsvpc network mode for Windows containers running in Amazon ECS.

When using the default network mode, task containers communicate with endpoints outside the instance using nat network and therefore, share the elastic network interface (ENI) attached to the instance. This means that all the containers running on an EC2 instance share the network policies of the instance ENI. Hence, the security group and ACL policies of the instance ENI needs to be a superset of requirements of all the tasks. For our customers, it means that they have limited control over the security policies of their tasks. Containers of tasks using default network mode are addressable in the VPC using their instance ENI’s IP address and the host port to which the container port was mapped. This leads to port conflicts that need to be managed by the customer, leading to additional configuration in the application.

With the awsvpc network mode, the tasks run in their own network namespace and are associated with their own elastic network interface. Amazon ECS controls the complete lifecycle of the task’s ENI from provisioning, attachment to cleanup. The major benefits of using awsvpc network mode are:

The following is a sample JSON task definition.

In the ECS section of the AWS Management Console, specify awsvpc as the Network Mode when you register your your task definition. 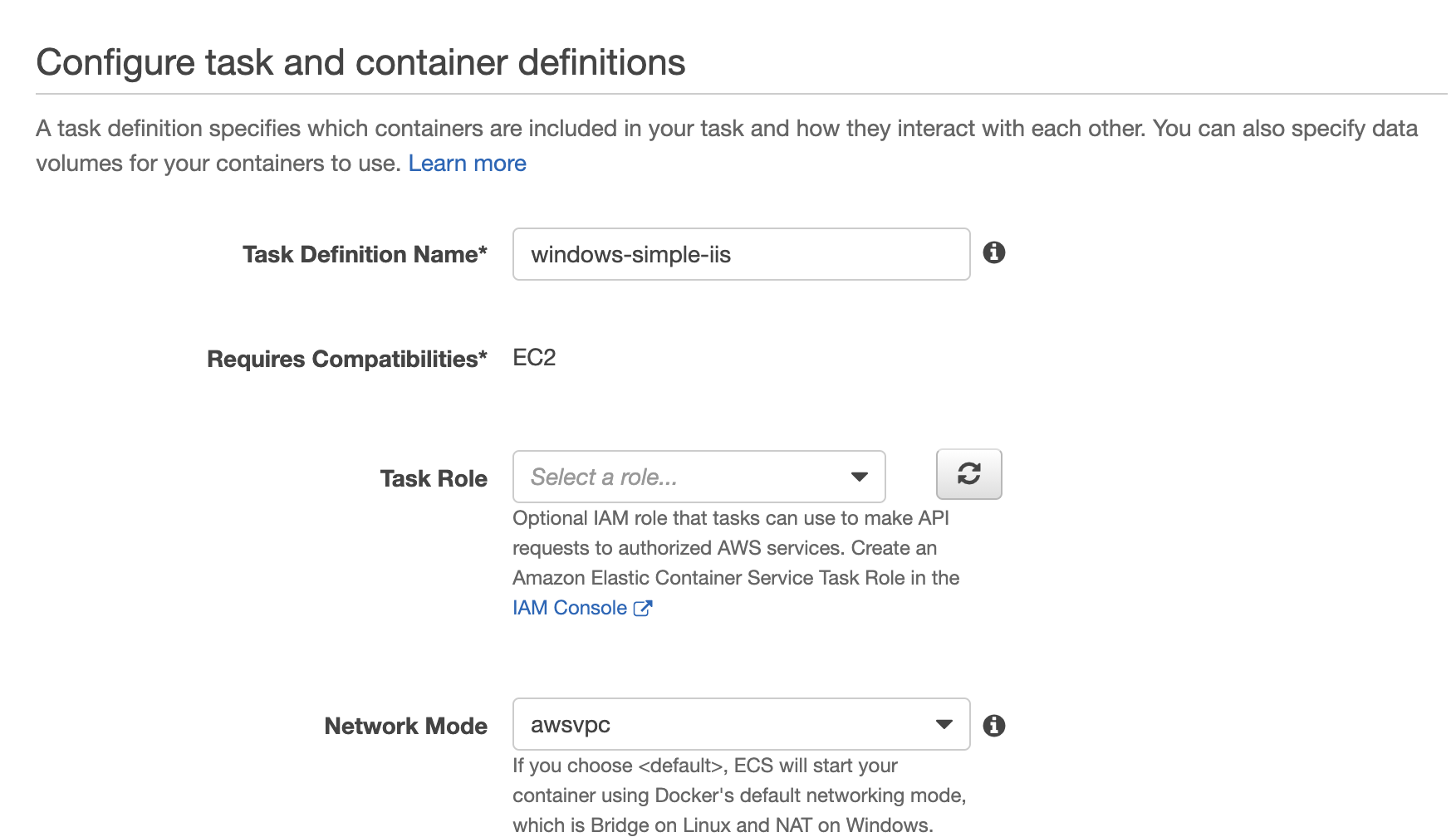 To create a task definition by using AWS CLI

In order to run the task, navigate to the cluster in which you want to run this task. Select the Run new task option. In the following screen, select the appropriate configuration. This includes selecting the task definition that we created earlier and specifying the set of subnets in which the task will run. Select or create an appropriate security group for the task. Note that you need to have at least one EC2 instance with the latest Windows AMIs registered in the subnets you specified in the run task configuration. 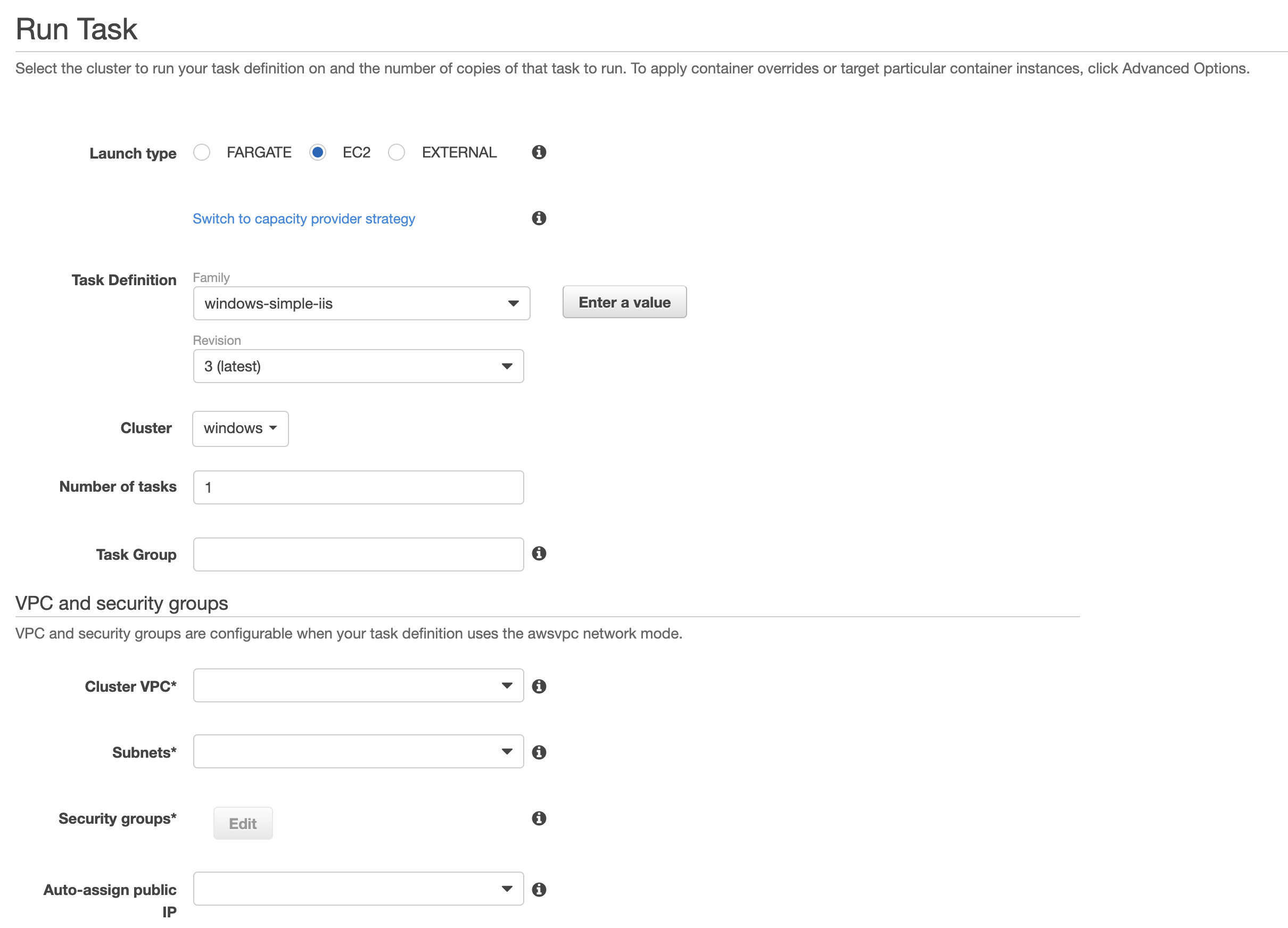 Now select the Run Task option to launch the tasks.

Your tasks should soon be up and running. You can verify the elastic network interface associated with the task. The details should be similar to the following. 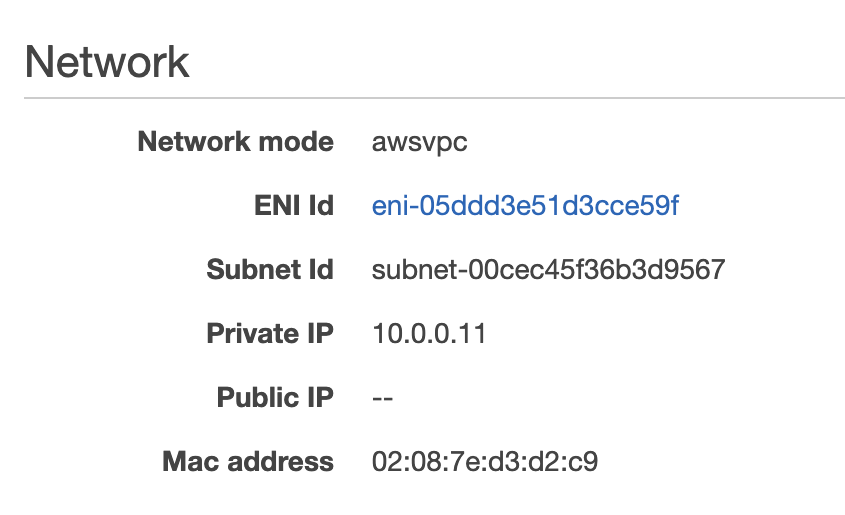 The Windows IIS server is reachable in your VPC using the task’s IP address i.e. 10.0.0.11. The traffic to/from the task would be controlled by the security group specified in the run task configuration. It is possible to have different security groups for the EC2 instance and the task.

To run the task by using AWS CLI

To inspect the task by using AWS CLI

In this post, we ran a sample Windows task using the awsvpc network mode. We observed that the task ran in its own network namespace with a dedicated ENI. The task containers can be addressed using the task ENI’s IP address and the container port.

To get started with awsvpc network mode for Windows tasks, review the documentation available here.