Before we build the demo environment, we will cover the concepts on progressive delivery, canary deployment strategy, automated canary analysis, AWS App Mesh, and Flagger at a high level.

Canary is a deployment strategy where a new application version is released to a small subset of users alongside the stable running version. This new version is then evaluated against the current deployment, which is the baseline to ensure the new deployment is operating well. You do this to mitigate risks before deploying the new version to all of your users. You can limit the impact of breaking application changes, and a very small percent of users are impacted if you have any bugs in the new release. You can test your changes with real users and compare different versions in parallel. It’s safe, fast, and cheaper to implement. Canary offers zero downtime with faster rollbacks. The drawback with the canary strategy is that rollouts can be slow, since each release needs to be monitored for a certain timeframe. Without automation, it can also be very time consuming and prone to error.

Flagger can use this to determine if the canary should be deployed and promoted or aborted and rolled back.

Flagger is a progressive delivery operator that automates the promotion of canary deployments. Flagger implements a control loop that gradually shifts traffic to the canary while measuring key performance indicators like HTTP requests success rate, requests average duration, and pods health. Based on the KPI analysis, a canary is promoted or aborted, and the analysis is pushed to a communication channel.

Flagger uses ingress controllers (NGINX, Traefik, and Contour) and service meshes (Istio, Gloo, App Mesh, Linkerd, OSM, and Alibaba Service Mesh) for flexible traffic routing. It relies on Prometheus metrics to analyze an application’s behavior during a controlled rollout. Flagger measures the application performance and runs tests on metrics and conformance. It allows you to safely deploy your applications and reduce the risk of application downtime by controlling and automating canary releases with Prometheus metrics. You can also set error threshold metrics to determine when to promote and when to abort and roll back a deployment.

Flagger lets you define key performance indicators and thresholds. The decision to shift the traffic, pause the shift, or abort or promote a canary is based on:

In this blog, we focus on automated canary analysis using App Mesh for the traffic routing.

AWS App Mesh is a service mesh that provides application-level networking to make it easy for your services to communicate with each other across multiple types of compute infrastructure. It allows you to transparently add capabilities like security, traffic management, and observability without any code instrumentation. App Mesh gives end-to-end visibility and high availability for your applications. App Mesh uses envoy proxy as a sidecar proxy. 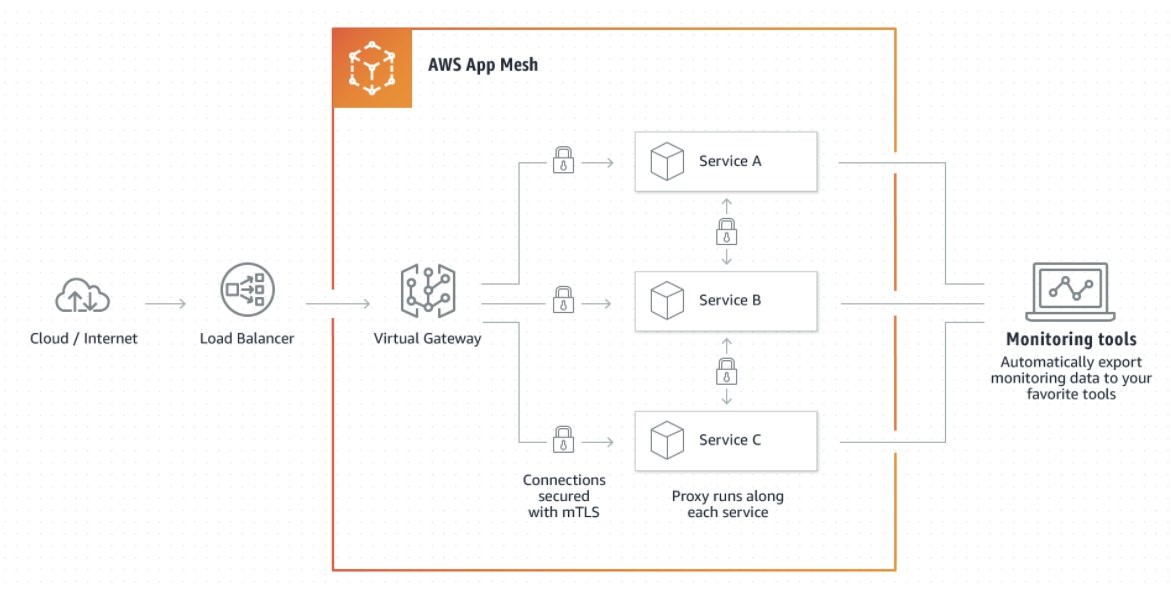 In this diagram, we cover different constructs to implement progressive delivering. An Amazon EKS cluster should be ready before you install App Mesh. App Mesh integration with EKS is via Kubernetes custom resources. Flagger automates the creation of the App Mesh objects for us. 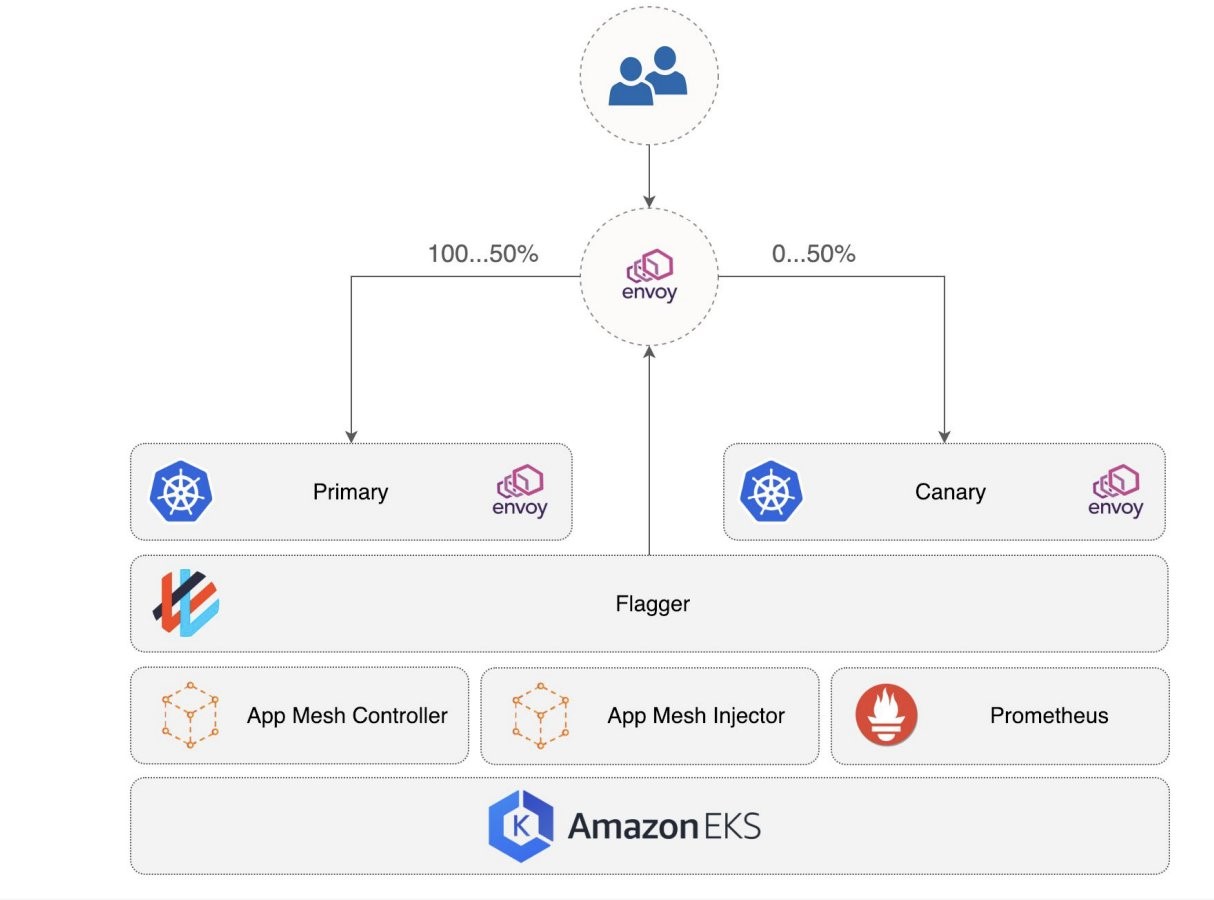 Step 3. Create a ServiceAccount for the App Mesh Controller that has the required IAM permissions. Replace <CLUSTERNAME> with the name of your EKS Cluster.

Replace <REGION> with the AWS Region of your EKS Cluster. (We have deployed v1.4.0 version of App Mesh Controller.)

The output should show a pod, deployment, service, and replica set running:

The output should show a Flagger pod running:

Flagger takes a Kubernetes deployment and creates a series of objects (deployments, ClusterIP services, App Mesh virtual nodes, and virtual services). All you need to create is a mesh resource.

Flagger is creating Kubernetes and App Mesh objects as documented previously under the Flagger section.

A mesh is a logical boundary for the network traffic between the services.

Sidecar injection is not happening at the mesh level, and it always happens at the namespace level. Namespaces with this label (appmesh.k8s.aws/sidecarInjectorWbhook: enabled) will be part of the mesh.

Sidecar injection will happen at the namespace level.

The output should show a deployment in not ready state.

A canary resource can target a Kubernetes Deployment or DaemonSet. The canary custom resource defines the release process of an application.

To check the status of the canary object, run this command:

The output should show the canary being initialized:

Step 5. To expose the webapp application outside the mesh, create an App Mesh gateway.

Install appmesh-gateway by running this command:

Step 6. Create a gateway route that points to the webapp virtual service.

To access the webapp on a public endpoint run these commands:

Outcome: v1 version of the application is deployed successfully and is accessible on a public endpoint.

A canary deployment is triggered if you update the Deployment Pod specification. Updates that you can do as of today are listed below:

Step 7. In this blog, we will trigger a canary deployment by updating the container image.

To view the v2 version of the webapp, refresh the URL.

v2 version got promoted from canary to primary after passing all the checks.

If your application has high latency or you see HTTP 500 errors, Flagger will automatically roll back to the previous version of your application. Automatic rollback is triggered if the number of failed checks reaches the canary analysis threshold. Flagger ensures the traffic is routed back to the primary, and the canary is scaled to zero. The rollout will be marked as failed.

To learn more about AWS App Mesh and Flagger: