This blog post shares a high-level strategy, automation and lessons learnt for the Qualification of infrastructure supporting GxP workloads running on AWS. We will also discuss how customer’s cloud agility could be maximized by automating infrastructure deployment and infrastructure Installation Qualification (IQ) steps, which helps to significantly reduce GxP qualification cycle time.

Controls managed manually through documents are labor intensive to produce. Once created, it is difficult to maintain the qualified state, especially if the Change Release cycle is very regular. These difficulties result in changes, such as enhancements, bug fixes, and new features now being bundled into bigger releases. Meeting compliance requirements is a key objective to deliver a highly reliable and consistent system. An automated cloud qualification framework improves overall GxP systems compliance of workloads running on AWS, while providing the ability to scale on other regulated workloads throughout the AWS environment.

AWS CloudFormation and benefits of Infrastructure as Code in Installation Qualification

CloudFormation provisions resources in a repeatable fashion.  Infrastructure stacks are built and rebuilt without having to perform manual actions or write custom scripts. CloudFormation determines the right operations to perform when managing your stack, and rolls back changes automatically if errors are detected.

CloudFormation interacts with AWS services via their API. The AWS infrastructure resources can be scripted either in JSON or YAML format templates and presented to CloudFormation, which will then form a stack of resources. A stack is a collection of AWS resources that can be managed as a single unit, or a template.

Chef InSpec is an open-source framework for testing deployed infrastructure. The Chef InSpec’s AWS resource pack provides test set capabilities on more than 50 AWS resources. One of the benefits of scripting test sets in InSpec is the ability to write test cases in easily readable formats without the need to write code or call APIs. This enables the ability to perform testing during the post deployment phase to ensure that resources deployed have the expected attributes as specified in the installation specification. The resource pack provides a list of out of the box features to test.

Running an InSpec test on deployed resources simplifies the testing effort in terms of test script manageability, and integration. For example, to test features of a deployed Amazon Simple Storage Service (Amazon S3) bucket, the statement below can be written in Ruby language, which is the language used in InSpec, instead of writing lines of code to test the same attributes:

The solution enables end-to-end automation of infrastructure Installation Qualification, from version control of script to protocol generation and dashboard for compliance monitoring.

The following steps describes the automation workflow and highlights AWS services and processes for this automation. At the high level, there are three main categories of processes that triggers eight automated steps. The three categories are:

Let’s walk through the steps of the end-to-end Installation Qualification automation solution.

Source code and scripts are version controlled in AWS CodeCommit. The repository contains scripts for infrastructure resources deployment and source code for IQ generation. Proper repository permissions need to be defined to ensure permissions are controlled and governed. Please refer to the CodeCommit Identity and Access Management documentation to ensure proper users and roles are setup for various actions.

AWS CodeBuild (CodeBuild) will be triggered to run upon any changes to the repository. CodeBuild performs a series of tasks as defined in the infrastructure as code script. This includes the AWS resources creation, IQ resources deployment and testings.

InSpec script runs within CodeBuild to validate and compare deployed resources against desired state per installation specification. Below is a reference of an InSpec profile, along with other attributes saved as inspec.yml file.

Chef InSpec allows for test results to be output to one or more reporters. A reporter is a facility for formatting and delivering the results of a Chef InSpec auditing run. A report can be generated in multiple formats:

In this example, the command line below will produce a reporter output in a JSON format.

The output of the InSpec JSON files are stored in Amazon S3.

Upon completion of the InSpec test validation, results of the test will be inspected. If there are failures, infrastructure changes will be rolled back. Otherwise, the CodeBuild will trigger the IQ process.

Below is an example of a successful InSpec run:

In order to enable quick retrieval of all IQ report runs, the data from the processing pipeline are stored in the following structure: 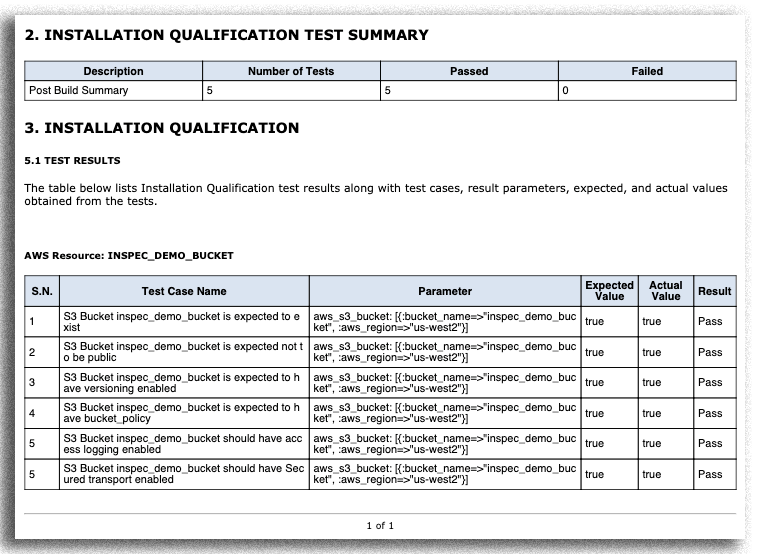 Upon completion of the AWS Step Function, an Amazon Simple Notification System (Amazon SNS) notification is sent. The notification can be in different formats such as email to a group or single individual, text messages, or other protocols supported by AWS SNS. There are two types of notification:

The Amazon SNS notification recipient should be specified in the Infrastructure as Code deployment as an environment variable for the Lambda function.

In parallel to IQ report generation, the output of the InSpec test run is used to support Continuous Compliance monitoring and tracking. Before the data can be used for the dashboard, the data needs to pre-processed and transformed. The data engineering pipeline includes data transformation, labelling and metrics calculation.

Since this is a fully integrated Infrastructure as Code solution, any changes to the infrastructure deployment script will trigger the deployment and execution of test runs. The Continuous Compliance dashboard provides an overview of deployed resources and their corresponding status.

There are many benefits of automating the infrastructure IQ process. One of the main benefits is the ability to efficiently run infrastructure deployment. This will automate IQ protocol generation once deployment completes, which significantly reduces the Change Management cycle time and ensures continuous compliance. Having an automated solution for infrastructure IQ improves consistency due to automation of development, deployment and testing processes.

Besides the benefits stated above, the following are some of the advantages of automating infrastructure IQ process:

There are a few assumptions built into this solution to enable fully compliant IQ automation. In regards to security and permission, only Read access should be allowed in the production account’s AWS Management Console. Also, any deployment in the production environment should be through the Infrastructure as Code pipeline (upon approval of the Change Management and Pull Request).

In this blog, we walked through the reference architecture of automating the infrastructure IQ process. The steps provided above covers the end-to-end process of infrastructure deployment, qualification test case execution, IQ report generation, and a continuous compliance strategy. The effort of maintaining continuous qualified and validated state is simplified with automation. Compared to a manual effort, cycle time to produce an IQ report can be reduced by at least 60% through automation. Automating the infrastructure Installation Qualification process will help maximize the agility and features that AWS Cloud infrastructure offers.