Virtual Network Interfaces (VNI) on Snowball Edge (SBE) are used for connecting your EC2 instances to your local area network (LAN). One can think of a VNI as a 1:1 entry in a NAT table (Network Address Translation). The VNI is associated to an instance (and its corresponding private IP address). 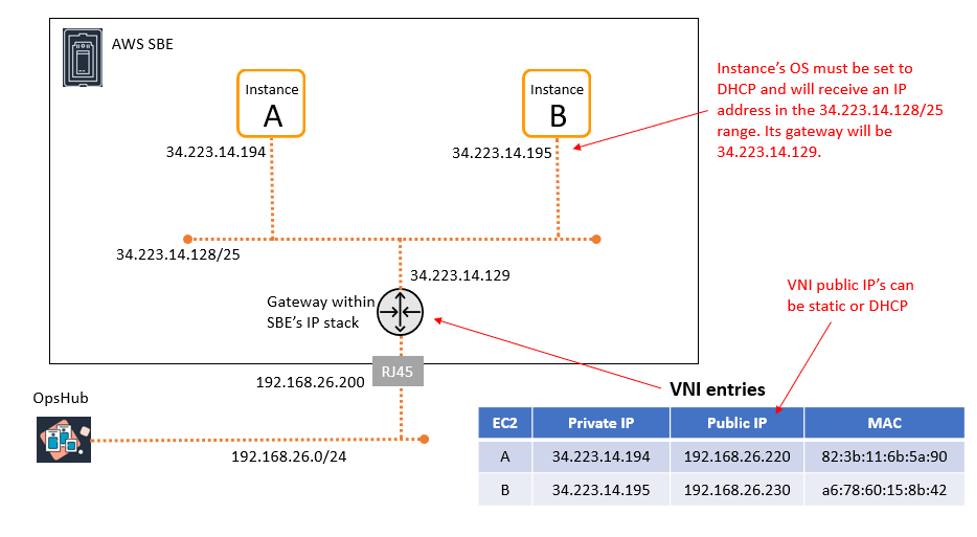 The Snowball Edge was designed for disconnected operations. This may involve moving the SBE from location to location, from network to network. When there are network changes, there are certain behaviors that can be observed. This chart describes the various scenarios that may be encountered.

1Is the SBE server connected to a network with a DHCP server at the time of boot?

2Has the SBE moved to a new network? The IP address of the physical interface has changed since the last time the SBE was powered off.

*The SBE should be rebooted if there are existing VNIs at the time the subnet change (the IP address and gateway of the SBE physical interface has changed). This will update the GW of the existing VNIs.

**VNIs with 0.0.0.0 addresses can be update via CLI using the snowballedge update-virtual-network-interface command. If a VNI with a 0.0.0.0 is deleted (without being updated to a valid IP address), it will “lock” a DHCP VNI slot. To clear this “lock”, the SBE should be rebooted. If the SBE cannot be rebooted, an alternative method is to create a new static VNI to take up that slot. As long as a DHCP VNI slot is “locked”, new DHCP VNIs cannot be created.

The following examples with screenshots help explain the various scenarios.