A key trend we observe with industrial IoT projects is that new industrial equipment come with out-of-the-box cloud connectivity and allow near real-time processing of sensor data. This makes it possible to immediately generate KPIs allowing to monitor those equipment closely and to optimize their performance. However, a lot of industrial IoT data is still stored in legacy systems (e.g. SCADA systems, messaging systems, on-premises databases) with different formats (e.g. CSV, XML, MIME). This raises multiple challenges concerning the real-time management of that sensor data, such as:

In this blog post we show how customers can use AWS Step Functions, AWS IoT Analytics, and AWS IoT Events as the basis of a lightweight architecture to address the aforementioned challenges in a scalable way.

In the use case we discuss in this blog post, we assume that a company is receiving sensor data from its industrial sites through CSV files that are stored in an Amazon S3 bucket. The company has to dynamically process those files to generate key performance indicators (KPIs) every five minutes. We assume the sensor data must be enriched with additional information, such as upper and lower threshold limits, before being stored in Amazon DynamoDB. The flow of data will be constantly monitored so that alarms can be raised if there are missing data records.

The AWS CloudFormation template provided with this blog provisions the resources needed to simulate this use case. It includes a built-in data simulator which feeds a Step Functions workflow with CSV files containing sensor data having four fields: 1/ timestamp, 2/ production order id, 3/ asset id, 4/ value. This data is then converted to JSON objects using AWS Lambda functions, which are then forwarded to AWS IoT Analytics to enrich the data (with upper and lower limits) and retrieve it every five minutes by creating a dataset. Finally, this AWS IoT Analytics dataset is sent automatically to AWS IoT Events to be monitored and stored in DynamoDB. 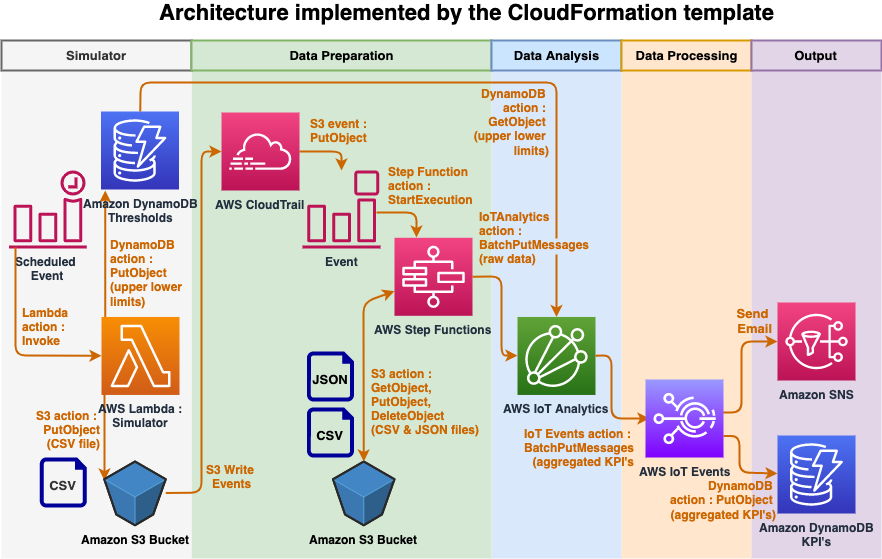 Refer to the CloudFormation template: iot-data-ingestion.json

The data simulator is coded in Python3.8 and runs in a Lambda function which is invoked every minute via a scheduled Amazon CloudWatch event. The data simulator stores five metrics in a CSV file in an Amazon S3 bucket, as shown in the following image. Those five metrics represent measurements from a production line.

The simulated data that represents the data coming from an industrial site is stored in a CSV file. This data must then be converted into a JSON format in order to be ingested by AWS IoT Analytics. Step Functions offer a flexible service to prepare data. So, instead of building a custom monolithic application, we spread the complexity of the data transformation across three Lambda functions, which are sequenced via a JSON canvas. The first Lambda function will format the CSV file into JSON, the second Lambda function will format the data field and append a timestamp, and the third Lambda function will send the data to AWS IoT Analytics. In addition, we have implemented checks to redirect invalid files to an Amazon S3 bucket if there is an error during the execution of the first two Lambda functions to be troubleshooted and reprocessed later. 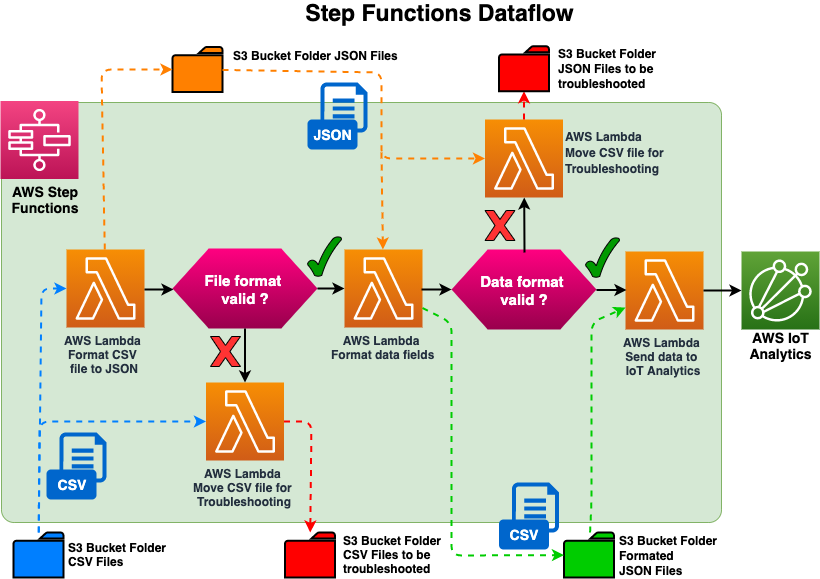 By proceeding in the same way, formats of different file types like MIME or XML could be handled within the same data flow. Getting started with Step Functions is easy because the sequencing is done with a simple JSON file that can be created directly via the Step Functions console which has a graphical interface that clearly identifies the sequencing of each step (see screenshot below). Passing parameters from one Lambda function to another is as easy has manipulating JSON objects.

The data preparation architecture uses an event-driven approach, where the saving of the CSV file to Amazon S3 will generate a CloudWatch event that triggers a Step Function to process the CSV file immediately. Let’s consider a scenario where instead we used a batch processing approach, where we have a CSV file containing production line data being stored to Amazon S3 every one minute. In this example we run a batch job every hour to process the CSV files, which will introduce a maximum data processing latency of up to 1 hour to ingest and process the data. However, with an event driven architecture, each CSV file will be processed as soon as it is saved to an Amazon S3 bucket, and eliminate any latency.

We use AWS IoT Analytics to perform data enrichment and analysis. Four of its components are needed: 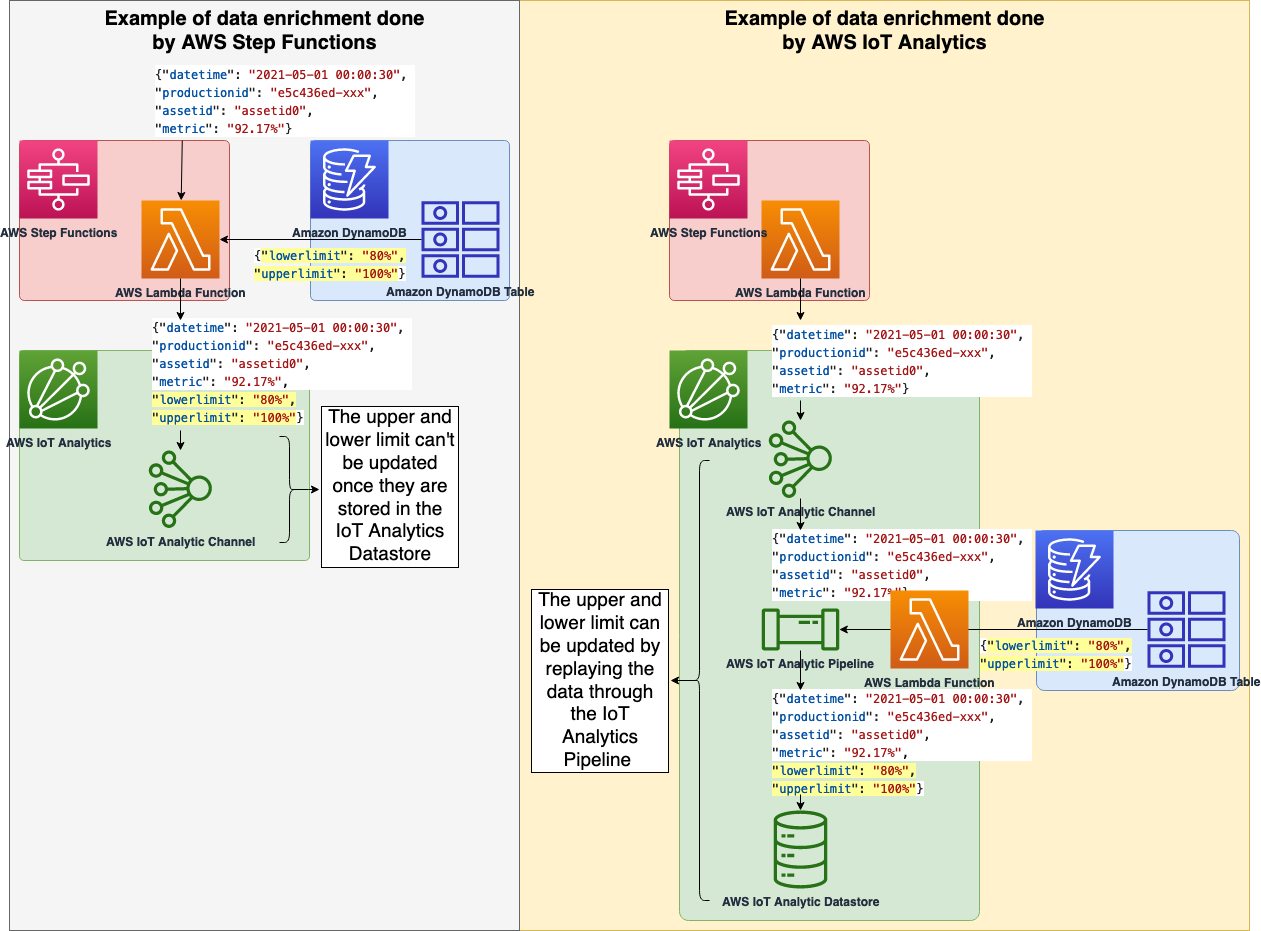 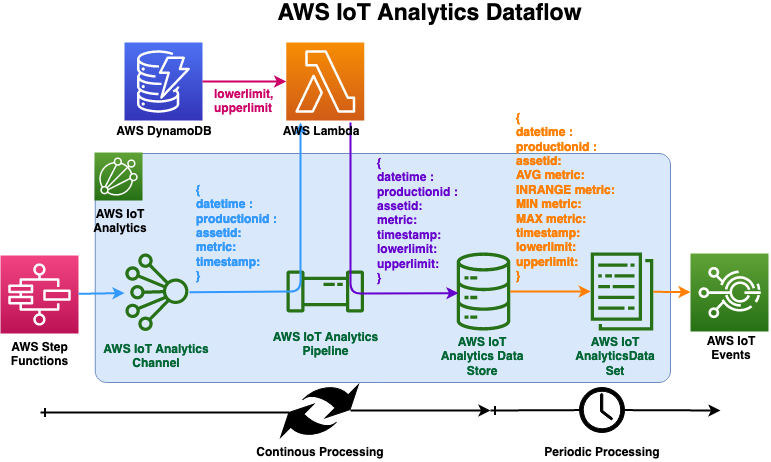 To record and monitor the incoming flow of data from AWS IoT Analytics, use AWS IoT Events, which can automatically send the dataset contents to an AWS IoT Events input. In our use case we are sending datasets every five minutes. We use the asset ID as a key by an event detector created in AWS IoT Events for each asset, which then runs custom, pre-defined conditional logic that is triggered by the incoming data and an internal timer. 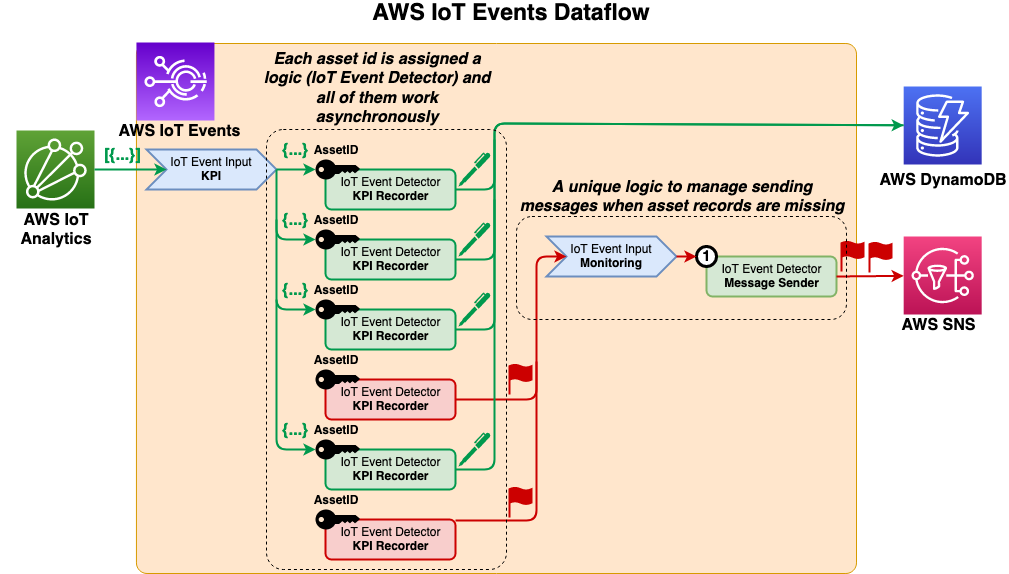 The event detector saves the input data to a DynamoDB table and resets a five minute timer. After this time period, the event detector triggers a message as an input to a second event detector which is used to merge all the incoming messages to send a single consolidated message. Let’s consider a scenario where we are monitoring 100 assets in a manufacturing plant, and every asset is sending an alarm. Without this second event detector identified to output a single alarm on behalf of all those assets, each asset event detector would send its own alarm message that may inundate the target mailbox. This would require additional and time consuming analysis of many email notifications, thereby further delaying any response needed to address the alarms. Because this specific event detector is be able to monitor alarms across the whole site, it can escalate the alarms accordingly. 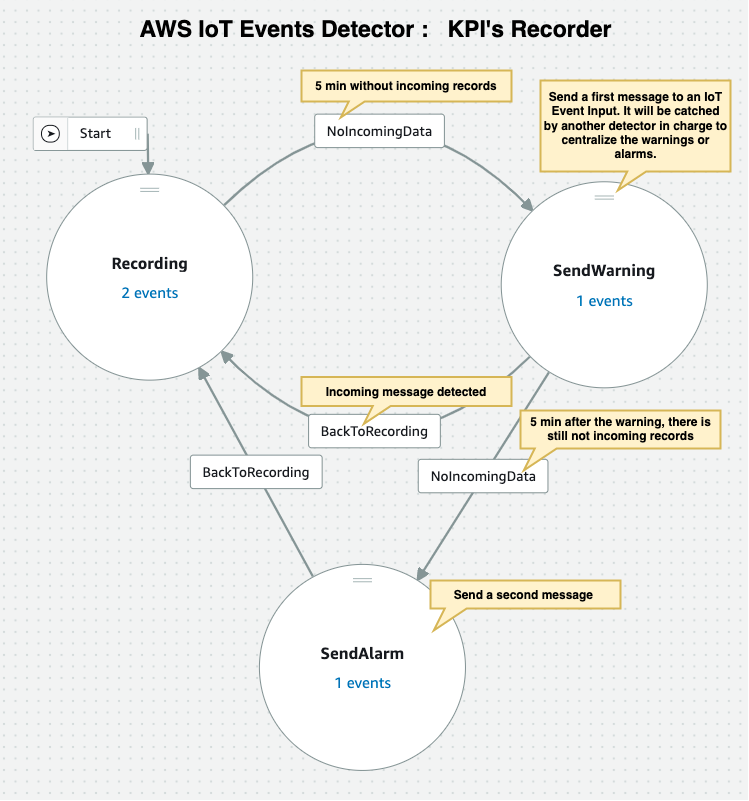 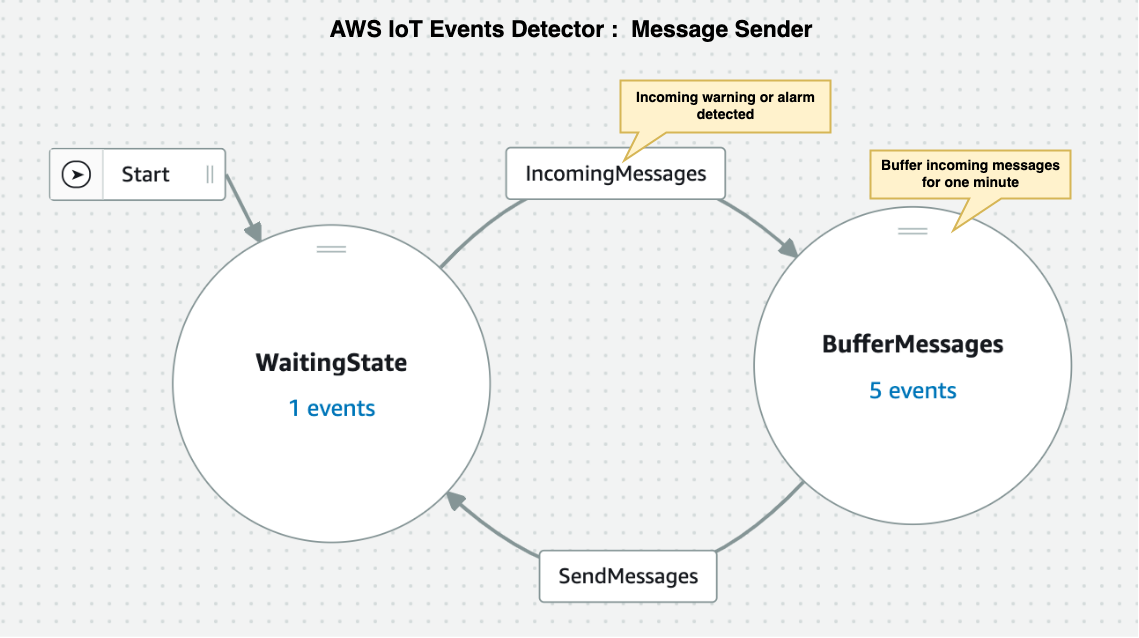 This post has presented a simple architecture built around three services: AWS IoT Events, AWS IoT Analytics, and Step Functions. The architecture addresses challenges often encountered when it comes to ingesting data from disparate systems. This architecture can also be used for collecting and processing data to be used for training machine learning models.

To get started and deploy the architecture described in this article, use this CloudFormation template.