Today’s post comes from Michael Garcia, Solutions Architect for AWS. Based in Paris, he helps our customers and partners gain proficiency with AWS services and solutions.

Imagine we are a video game editor and we want our end users to be able to play our game inside a browser as well as on their smart phones. To make the authentication of our users across different platforms and different devices very easy and secure, we decide to use Amazon Cognito. We will use Amazon as our identity provider (other identity providers are supported with Amazon Cognito such as Facebook and Google).

In this scenario, the mini-game we will develop is simple. A player has a gauge with a scale of 0 to 100 that represents his life’s points. He can then click on two buttons to add or subtract points.

We need a simple way to persist data between the mobile and web platforms so we will use the Amazon Cognito’s datastore for that purpose.

Let’s log into the Node.js web app and play the mini-game.

Once the “Login with Amazon” button is hit, the user will have to authenticate using his Amazon credentials. 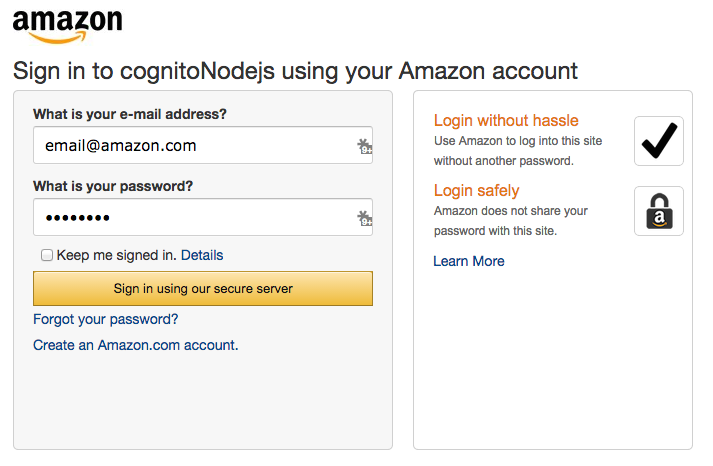 At this point, the user is redirected to the callback URL of the Node.js app. In the callback function, we retrieve multiple pieces of information on the user:

We now have to call Amazon Cognito in order to get a unique Cognito ID for our user. This Cognito ID will represent our identity.

Now that we have retrieved a Cognito ID for our user, we will list the records contained in the Amazon Cognito’s dataset used by the app; for that, we will need to instantiate the Amazon Cognito Sync client. The goal is to retrieve the current state of the mini-game.

By using the previous call to get a Cognito ID, it is now really easy to instantiate the Amazon Cognito Sync client:

We will use this client to retrieve information on the dataset used by the app with the listRecords function. This functions either returns data if the dataset is not empty or creates an empty dataset if it does not exist. This will be useful when the user connects for the first time because no dataset will exist at this time.

The website can now display information coming from Amazon on the user (name, email address) as well as information retrieved from Amazon Cognito’s dataset. The “Play !” section display is dynamic and only appears once the user is authenticated. In this screenshot, the user already has 25 points in the gauge.

Interacting with the data

Now it’s time to play with the three buttons that appear under the “Play !” section. The heart icon will add 25 points to the gauge, and the bomb icon will subtract 25 points from the gauge. The refresh icon can be used to synchronize the data if you are making modifications to the dataset at the same time on another platform—for example, if you are using the mobile sample app.

If a user clicks on the heart or the bomb icon, we will need to update the dataset with a new value so that the gauge can reflect that change. Before we can update the dataset, we must make a listRecords call as described above in order to retrieve the SyncSessionToken from the API. This token is required if you want to make an operation on the dataset (replace or delete). Once we have the SyncSessionToken in our possession (stored in the user’s session in our example), we will use the Amazon Cognito client once more to interact with the dataset.

This time we will call the updateRecords function:

As you can see on this screenshot, after clicking twice on the heart icon the gauge now contains 75 points. The data returned mentions the key that we changed in the dataset and the new value, reflected by the gauge.

We’ve seen how easy it is to integrate with Amazon Cognito and how a developer can benefit from its authentication and data synchronization features. Your users will benefit from those features as well, because they will get a smooth experience transitioning from one device or platform to another.

You can now implement these features in your websites as well as on your mobile apps using the AWS SDKs. You can also play around with the sample app to extend it. For example, you could authorize unauthenticated users to interact with it as well.