Continuously building, testing, and delivering updates for your app to your users helps you release new features sooner and with fewer bugs. In an earlier blog post “Automatically build your Android app with AWS CodeBuild,” Adrian Hall explains how you can use AWS CodeBuild to compile an Android app and publish the APK to Amazon S3.

In this blog post, we’ll be adding a continuous integration and continuous delivery (CI/CD) pipeline by using AWS CloudFormation, AWS CodePipeline, AWS CodeBuild, and AWS Device Farm. After you’ve completed the steps in this blog, you’ll have a working pipeline that will build your app, test it on real physical devices, and then deliver the packaged APK file to an S3 bucket each time a change is committed and pushed to the source code repository .

Let’s start by creating a new project using Android Studio. If you already have a project you want to use, then you can skip this step. Otherwise, follow the steps on the Android Studio website to create a project. When you select the devices to target, choose Phone and Tablet. By default, a module named ‘app’ is created.

Our pipeline uses multiple AWS services. We use an AWS CloudFormation template to provision all of those resources for us automatically. The pipeline consists of the following:

Create the CloudFormation stack by following these steps:

AWS CloudFormation creates your stack. After it’s finished, the stack is in the ‘CREATE_COMPLETE’ status. Click the stack in the list of CloudFormation stacks, and then click the Outputs tab on the bottom half of the screen. The stack outputs two values, which we use in the upcoming steps. They are CodeRepoCloneUrlHttp, which contains the Git URL that we push code to, and OutputApkUrl, which contains the URL to the latest built and tested APK file. 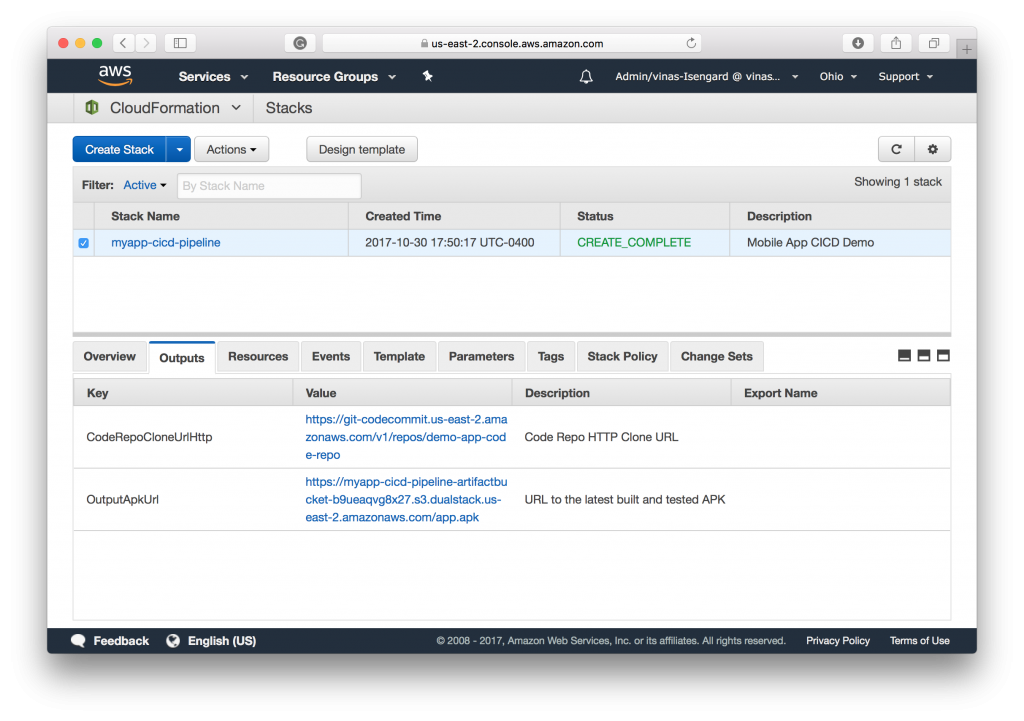 Configure the project to use CodeCommit

If your development environment isn’t already configured for AWS CodeCommit, you need to follow the setup steps in the AWS CodeCommit User Guide to install the Git client, grant CodeCommit permissions to your IAM user, and set up the credential helper. You can skip step 4 because we’re configuring an existing project to use the Git repository.

To configure your Android project to use CodeCommit, you need to add the CodeCommit repository that was created by the CloudFormation stack as a Git remote. Use the CodeRepoCloneUrlHttp output value from the previous step, and run the following command from your project’s workspace:

Push the code to CodeCommit

We’re now ready to push the source code for your Android app to the CodeCommit repository. Doing this triggers an execution on the CodePipeline pipeline. A couple minutes after you’ve pushed the code, you’ll have a fully tested APK file in the output S3 bucket.

From your Android app’s workspace, you need to make sure that all of the files have been checked into the Git repository.

Add all of the files in your app’s workspace:

Commit the changes to your local Git repository:

Push the changes to the CodeCommit repository: 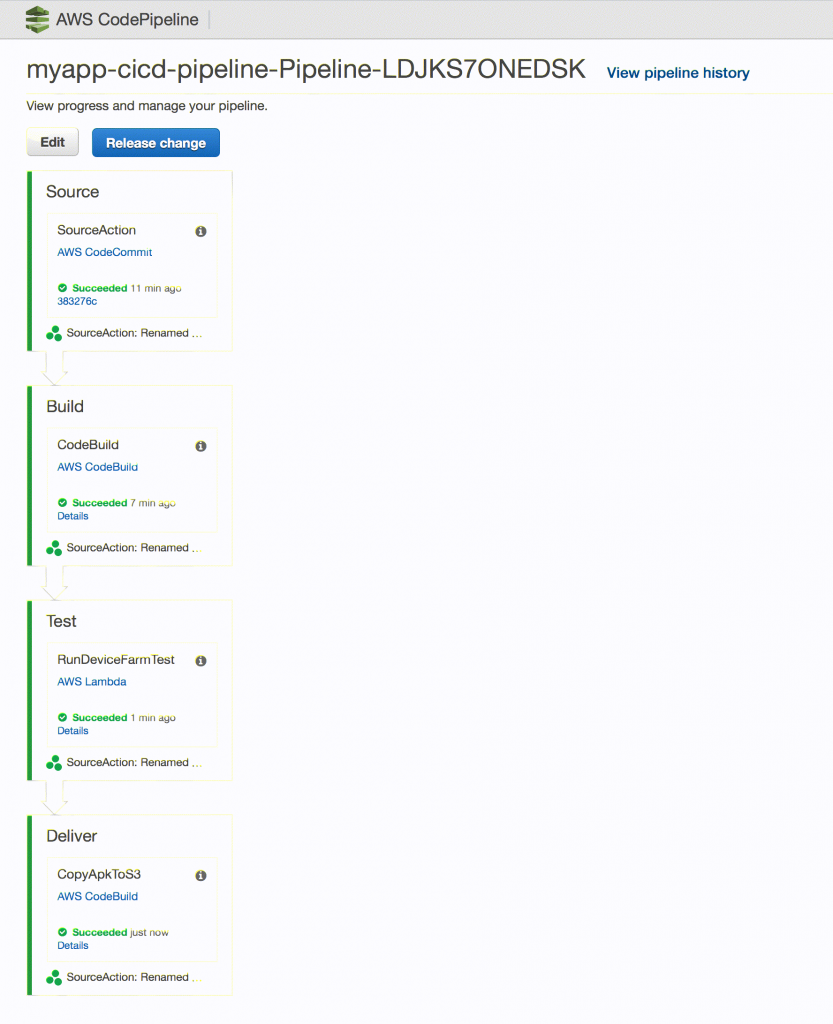 You can view the Device Farm test results from the Device Farm console. Click the project named demo-app-devicefarm if you used the default settings when you created the stack. Otherwise, click the name of the project that you specified in the CloudFormation stack parameters. Under the Automated tests tab, you see a test if it’s currently running or has finished. If you don’t see a test, the Test stage might not yet have been executed by CodePipeline. After the test has finished, you can view the results and also screenshots from the test. 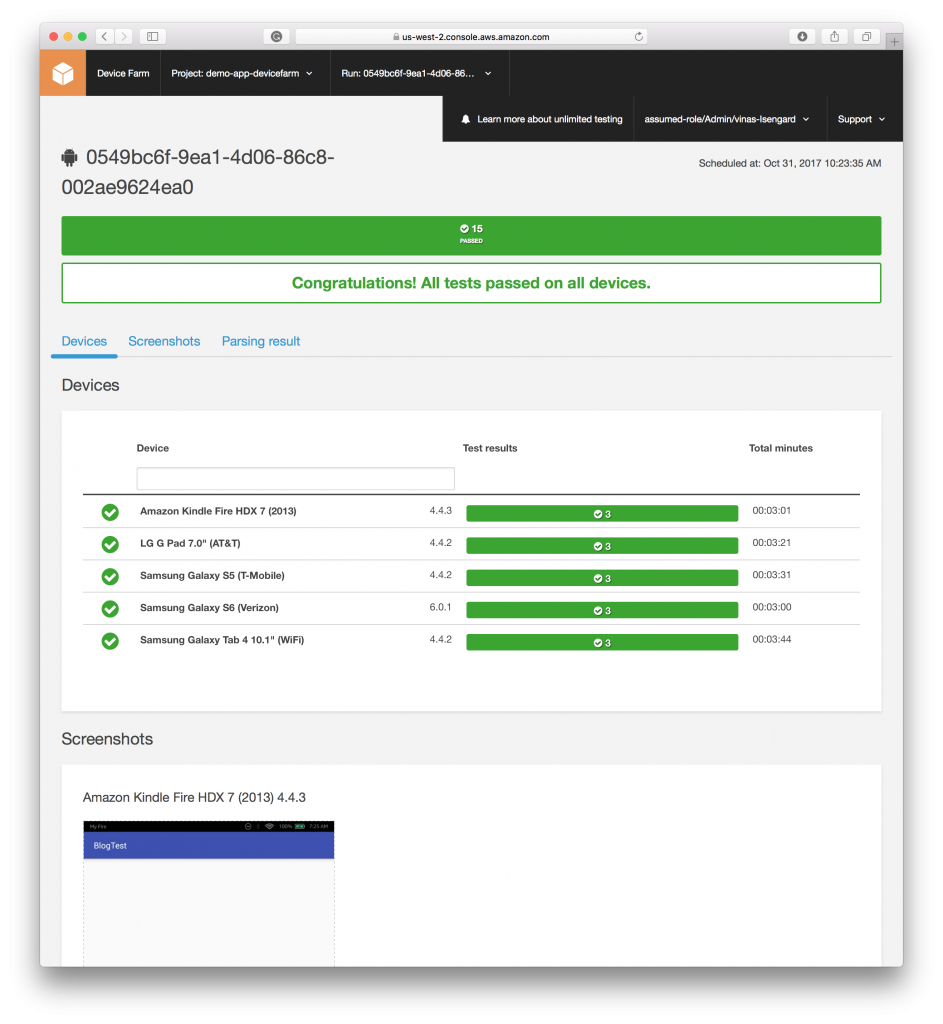 The CloudFormation stack output has an output with a key named OutputApkUrl. The value contains a URL that you can use to download the APK file directly. You can also use the URL to install the APK file on an Android device. 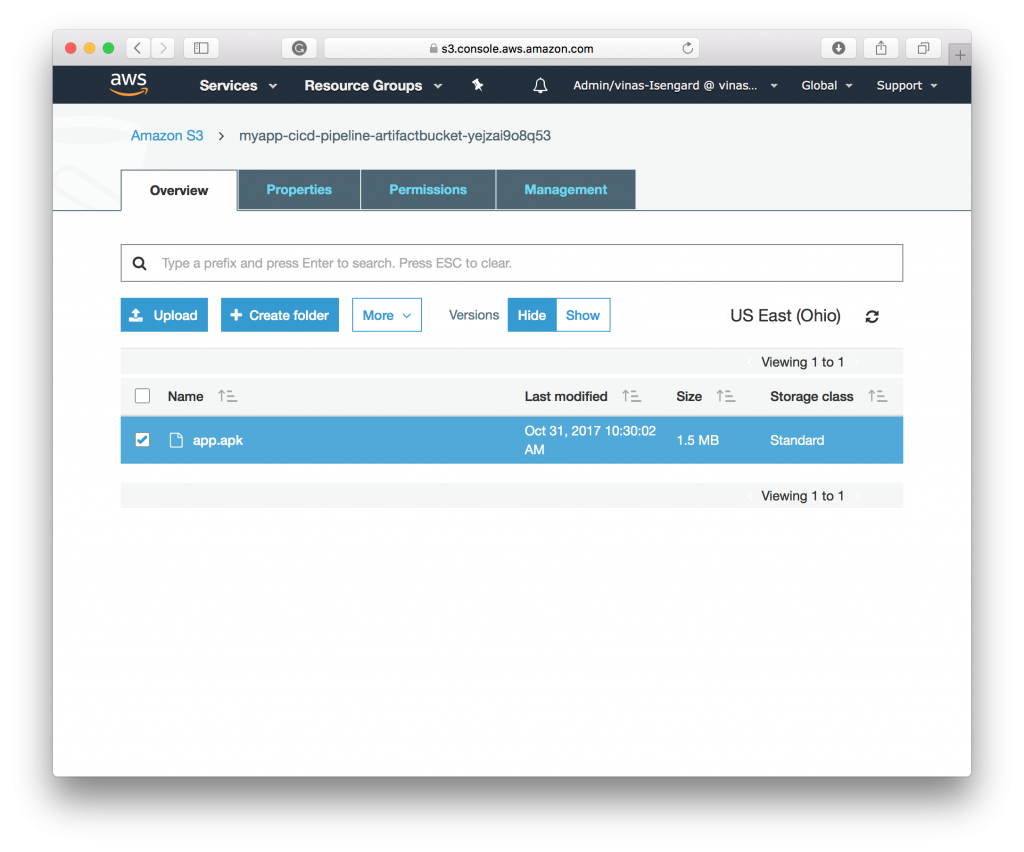 We’ve automated the building, testing, and delivery for an Android app by using AWS services. With a little work, you can modify the AWS CloudFormation template to also sign the app using your certificate, and deliver it directly to the Google Play store. To automate the delivery to the Google Play store, you can use tools such as fastlane. You can invoke these tools from CodeBuild.

This post was contributed by Vinay Selvaraj. Vinay is a Consultant with AWS Professional Services who specializes in helping customers migrate to the cloud. You can contact him on Twitter at @vinayselvaraj.