ROS applications are typically a combination of numerous packages, dependencies and launch configurations that are highly dependent on their runtime environment for successful execution. This potpourri of software may work perfectly and consistently in one environment, say the IDE on a developer’s workstation, and quickly break when it is ported to a new one, like after being deployed to a robot’s on-board computer.

Between changing OS distributions, varying chip architectures and conflicting upstream dependencies, the deployment of ROS applications from development environments to physical robots in a reliable and repeatable manner is a non-trivial problem for roboticists.

To avoid breaking a build, one needs a robust app packaging mechanism together with a durable delivery pipeline for any robot software.

The Problem: Packaging and Delivery

Packaging an application creates a container that includes all the software, libraries and support files needed to run the app as a standalone unit. This is not to be confused with a ROS package, which is a term used interchangeably to denote a ROS application.

There are a few benefits to rolling up application software together with its dependencies. For one, it makes the application immune to breaking changes in dependencies upstream, thereby in creasing the reliability of the software. In addition, since dependencies do not need to be downloaded for every new installation on a robot, the deployment is much faster than traditional apt, yum or rosdep installations. Lastly, once deployed, the packaged application runs in an isolated sandbox with only mediated access to sensitive system resources. This enhances the security posture of the robot.

There are several popular formats for building containerized packages available today, such as Docker, Flatpak, Bundles, Appimage and Snaps. Aggregating software into a single independent asset with any of these tools essentially makes the application portable, thus readying it for distribution. The distribution itself is handled by a delivery pipeline, which is a mechanism that downloads the packaged asset over-the-air on to a robot and installs it in the right subspace within the operating system.

Some delivery pipelines available to roboticists include Flathub, Snap Store and AWS IoT Greengrass. These delivery mechanisms are often tied to and optimized for only one of the aforementioned packaging formats, like Snap Store for Snaps or AWS IoT Greengrass 1.0 for Bundles. That changes with the latest release of AWS IoT Greengrass, which now supports delivery of applications as bundles, snaps, Docker images, or almost any format you prefer.

This gives developers much needed flexibility to use a packaging scheme that they are familiar and comfortable with, and benefit from the advantages that a particular packaging method may bring to a customer’s specific use case.

Snap is a packaging tool developed by Canonical for Linux-based operating systems. Snapping a ROS application creates a containerized package that works seamlessly within any Linux environment. Developers can make their software available to even niche flavors of Linux without having to create and maintain separate packages for each distro, saving on time and reducing the complexity of their code base. This cross-platform compatibility is a big advantage of snaps.

AWS IoT Greengrass 2.0 allows users to connect a robot to their AWS account as a core device. A daemon running on the robot handles messages and data between the device and the AWS Cloud. AWS IoT Greengrass adopts the idea of modular components; pieces of software that are deployed on a core device and defined by a configuration file called a recipe. Recipes usually refer to one or more artifacts, which are the software assets prepared by the developer. In the demo following, our artifact is the ROS snap that we create.

In this exercise, we will package a sample AWS RoboMaker application as a snap and deploy it with AWS IoT Greengrass 2.0 on to a Raspberry Pi-operated TurtleBot. We assume the Pi is set up with a 64-bit OS. The exact operating system distro does not matter as long as it is a distribution of Linux.

Step 1: Set up the robot

Log in to your robot, either via SSH or by hooking up a display to the Pi, and configure it with some relevant dependencies.

Your robot should now appear listed as a core device in AWS IoT Greengrass console. Make sure you are in the same region as the one configured in your AWS command line profile.

In the previous step, when we connected the robot to AWS IoT Greengrass, the installer will set up an IAM role that allows the robot to communicate with AWS. This role, however, does not yet have access to the project’s Amazon S3 bucket where we will upload artifacts. We will now attach a policy to this role so that the robot can access the snap once a deployment is triggered.

Replace the <S3_BUCKET> placeholder with the name of the bucket you created in Step 1.

The Amazon S3 access policy will now be associated with the robot’s AWS IoT Greengrass role in IAM.

Note that since we did not specify a role name while setting up the robot, AWS IoT Greengrass used a default value for the role name, GreengrassV2TokenExchangeRole. Had we stated a preferred role name during installation, we would use that role name in the last command.

We will use the AWS Cloud9 IDE for this demonstration, but the compilation and deployment process described in Steps 6-9 can be extended to any environment of your choice.

This will open up a new tab with an AWS Cloud9 set up in progress. Give it a few moments to finish and then the IDE is ready for use. You can always reconnect to this IDE again by going to Development environments in the AWS RoboMaker console.

We will use a sample Hello World project provided by AWS RoboMaker. The ROS application will rotate your TurtleBot in place at a constant rate. 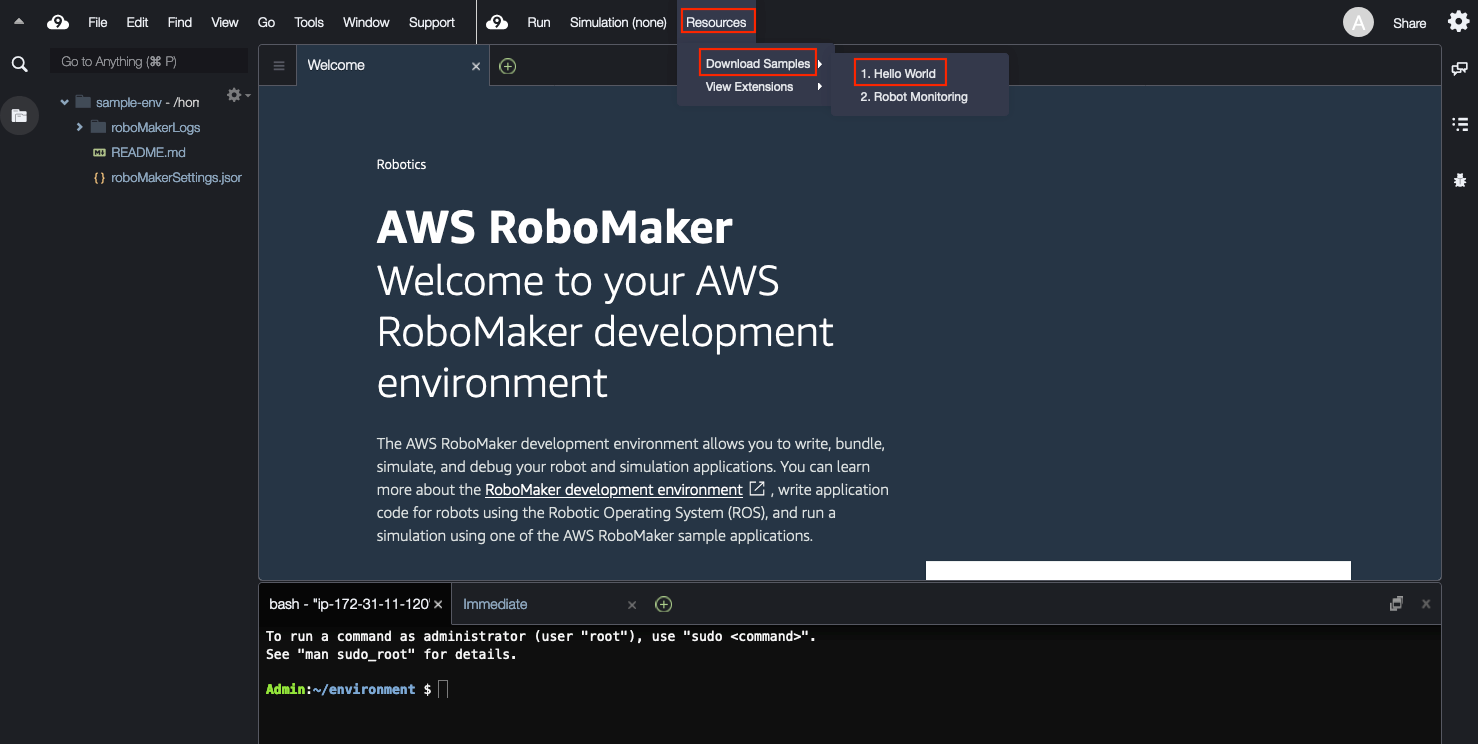 A terminal tab titled “Download Samples” will spawn at the bottom of the screen and show the ROS application being downloaded. Wait for this process to finish.

The application should run without any error messages. 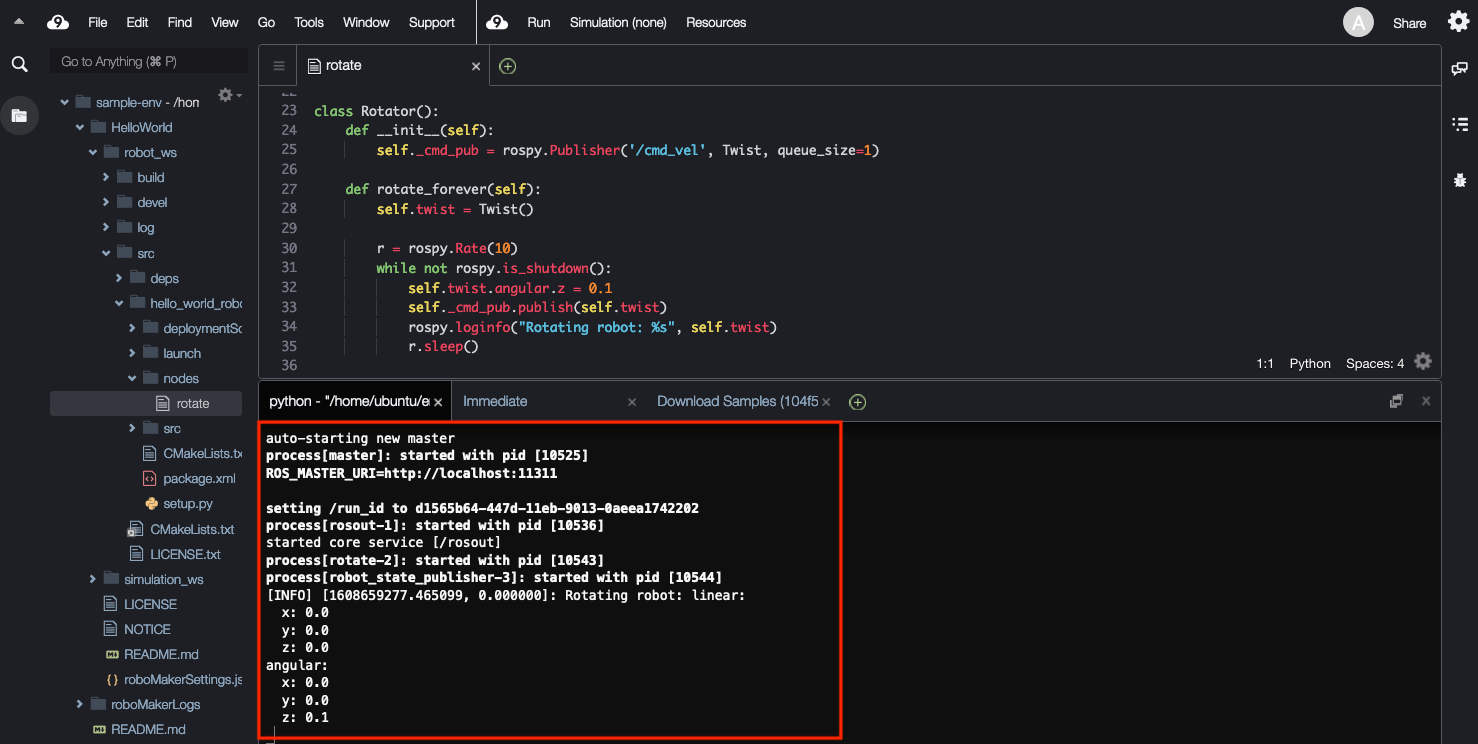 Your AWS Cloud9 environment is running on a x86_64 virtual machine, while the Turtlebot has an arm64 chip. So, we need to cross-compile the ROS snap for the target architecture. This is one area, however, where snapcraft - the tool used for building snaps - runs into trouble. Snapcraft does not currently support cross-compilation.

Fortunately, AWS has developed an open-source tool, Snap xCompile, that greatly simplifies the process of cross-compiling snaps. Let us use this tool to build an arm64 snap directly from our Cloud9 environment.

Snap xCompile will upload your code to a private Amazon S3 bucket, provision necessary AWS resources for snapping, build the snap and then download it to your project’s root directory. Thus, with a single command and zero configuration, you obtain a snap built for the target architecture independent of your invocation environment.

The build process will take about 20 minutes to complete. The script will keep you posted on its progress. The finished snap will finally be downloaded to your catkin workspace by the script.

We will now upload the snap to an Amazon S3 bucket and have our recipe refer to it. As of the date of writing this post, AWS IoT Greengrass 2.0 is still a very new addition to the AWS CLI and so we will also have to update the command line tools included in our IDE.

This recipe provides instructions to AWS IoT Greengrass on where to find the snap, how to install the software, and how to launch the application once it is deployed to the robot.

The component will now appear listed on the Components page of the AWS IoT Greengrass console.

Step 8: Deploy snap to your robot

AWS IoT Greengrass is now ready to deploy, install and launch our snap to the robot.

The console prints out a stream of Twist messages as expected. 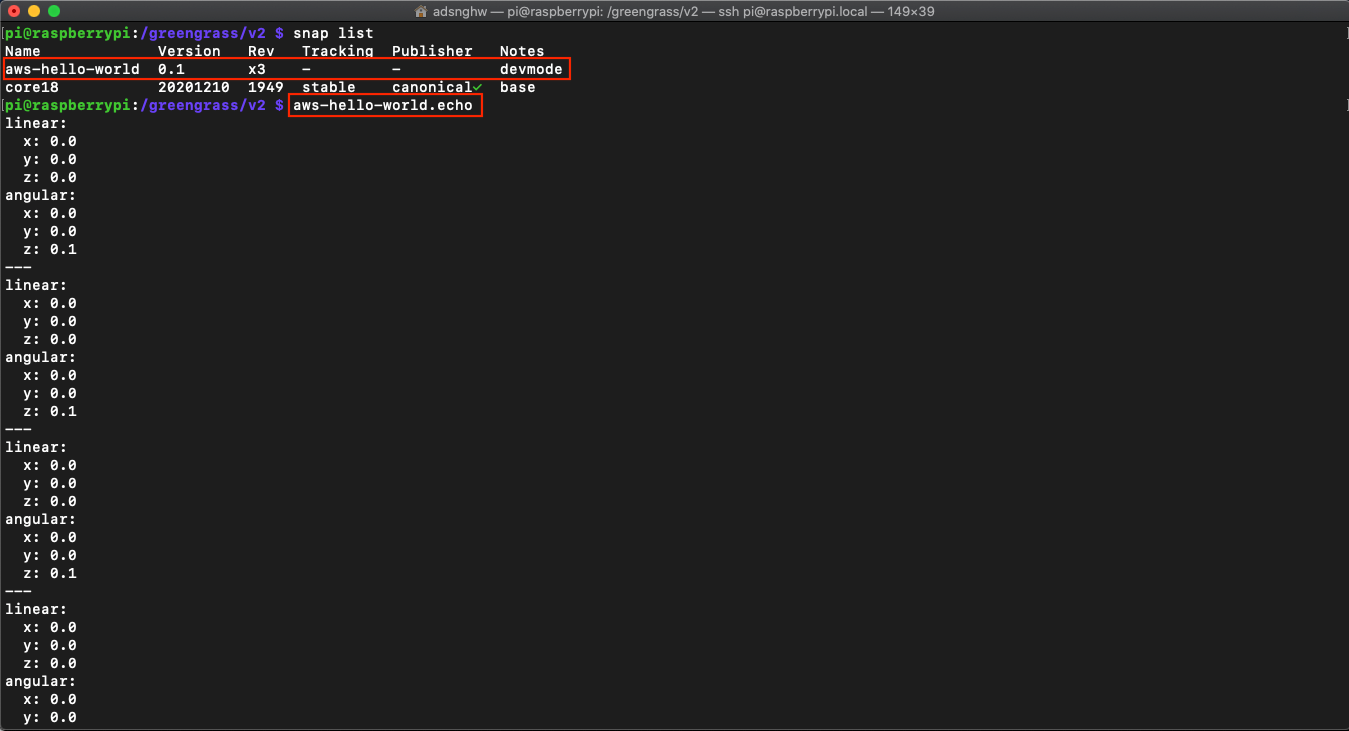 Before we finish, let us delete the AWS resources created during this demo so you do not incur unnecessary charges on your account.

In this blog, we discussed the benefits of a robust software packaging and delivery mechanism for roboticists, and how otherwise complex over-the-air deployments are made painless by AWS IoT Greengrass 2.0. The flexibility offered by custom recipes in AWS IoT Greengrass 2.0 allows users to deploy applications in whichever format they prefer while maintaining complete control over how the software behaves once it is on the target system.

The hands-on exercise demonstrated how ROS snaps can deployed to a robot over-the-air using AWS IoT Greengrass. Observe how we did not have to install ROS on the Pi for the snap to work; the containerized package carried everything it needed to run on the system without relying on external dependencies. This snap will now work on any Linux system it is installed on.

Check out developer guides for AWS RoboMaker, AWS IoT Greengrass, and Snapcraft to dive deeper into these topics.