AWS Controllers for Kubernetes (ACK) is a new tool that lets you directly manage AWS services from Kubernetes. ACK makes it simple to build scalable and highly-available Kubernetes applications that utilize AWS services.

Today, ACK is available as a developer preview on GitHub.

In this post we will give you a brief introduction to the history of the ACK project, show you how ACK works, and how you can start to use the ACK or contribute.

How did we get here?

In late 2018, Chris Hein introduced the AWS Service Operator as an experimental personal project. We reviewed the feedback from the community and internal stakeholders and decided to relaunch as a first-tier open source project. In this process, we renamed the project to AWS Controllers for Kubernetes (ACK). The tenets we put forward are:

Over the past year, we have significantly evolved the project’s design, continued the discussion with internal stakeholders (more in a moment why this is important), and reviewed related projects in the space. A special shout-out in this context to the Crossplane project which does an awesome job for cross-cloud use cases and deservedly became an CNCF project in the meantime.

The new ACK project continues the spirit of the original AWS Service Operator, but with a few updates:

Our goal with ACK to provide a consistent Kubernetes interface for AWS, regardless of the AWS service API. One example of this is ensuring field names and identifiers are normalized and tags are handled the same way across AWS resources. 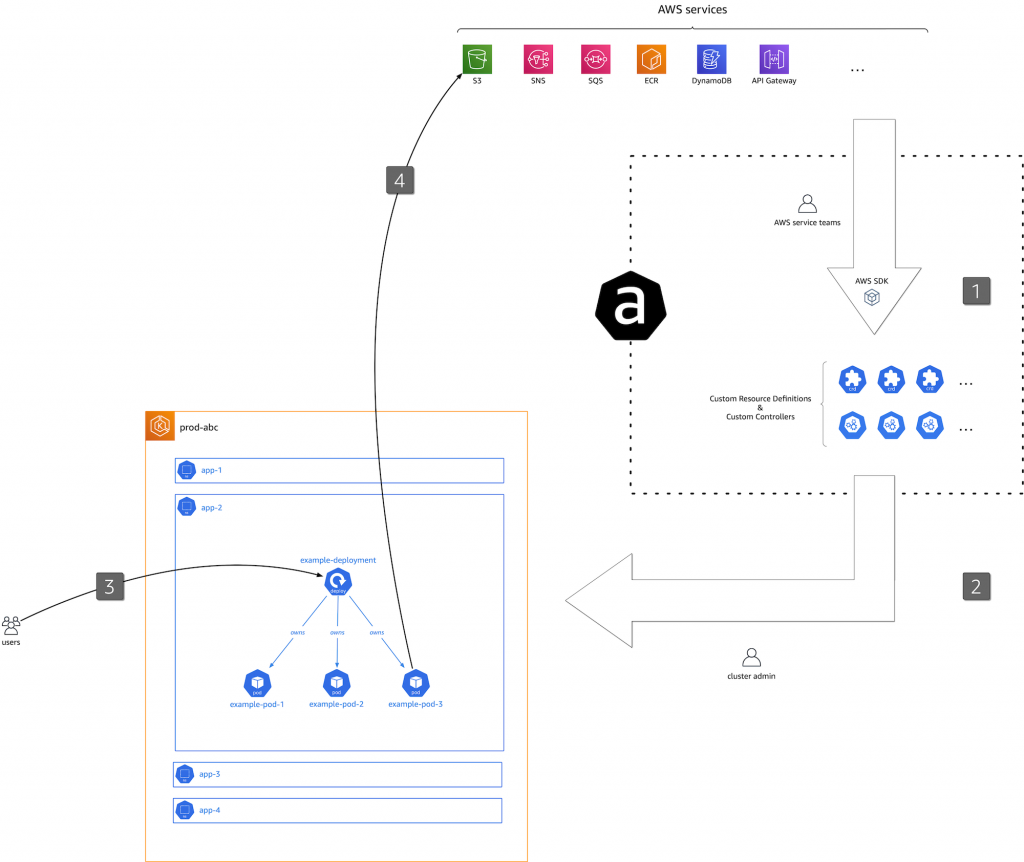 As depicted above, from a high level, the ACK workflow is as follows:

Let’s now have a closer look at the workflow, using a concrete example.

The above artifacts—Go code, container images, Kubernetes manifests for CRDs, roles, deployments, etc.—represent the business logic of how to manage AWS resources from within Kubernetes and are the responsibility of AWS service teams to create and maintain along with input from the community.

To use ACK in a cluster you install the desired AWS service controller(s), considering that:

As per the AWS Shared Responsibility Model, in the context of the cluster administration, you are responsible for regularly upgrading the ACK service controllers as well as applying security patches as they are made available.

As an application developer, you create a namespaced custom resource in one of your ACK-enabled clusters. For example, let’s say you want ACK to create an Amazon Elastic Container Registry (ECR) repository, you’d define and subsequently apply something like:

4. Managing of AWS resources from Kubernetes

ACK service controllers installed by cluster admins can create, update, or delete AWS resources, based on the intent found in the custom resource defined in the previous step, by developers. This means that in an ACK-enabled target cluster, the respective AWS resource (in our example case the ECR repo) will be created, with you having access to it, once you apply the custom resource.

Let’s focus a little bit more on the creation and management of AWS resources from Kubernetes, since this is how most users will interact with ACK. In our example, we will create an S3 bucket from our cluster.

In the following, we want to use ACK to manage an S3 bucket for us. Given that this is a developer preview, we’re using the testing instructions as per contributor docs. In this context, we’re use kind to do local end-to-end testing with Docker as its only dependency.

Building the container image for the S3 service controller, creating the cluster and deploying all the resources with the make kind-test -s SERVICE=s3 command will likely take some 45min the first time around (cold caches). Once that’s done, you can have a look at the ACK setup:

Further, we’d expect the S3 CRD to be installed and available in the test cluster, and indeed:

Based on the CRD we would further expect to find an S3 bucket custom resource:

Let’s now have a cluster look at the S3 bucket customer resource (note: what is shown here is the automatically generated custom resource from the integration test, edited for readability):

Taking all together, the above setup looks as follows: 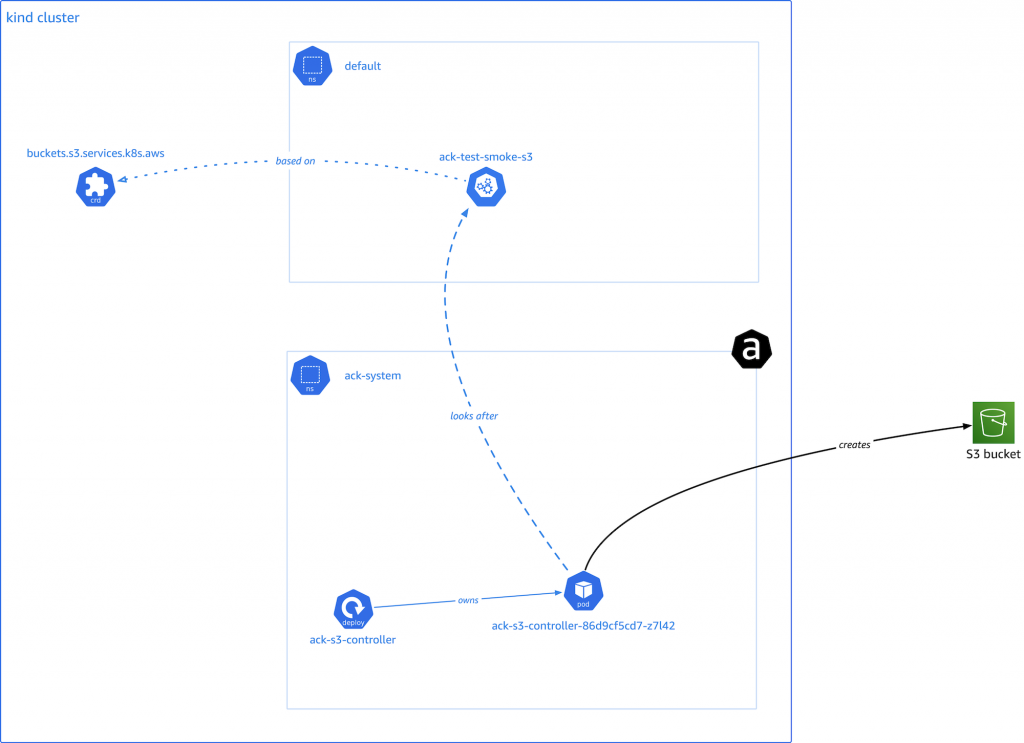 OK, with this hands-on completed you should now have an idea how ACK works. Let us now turn our attention to how you can get engaged and what’s up next.

We are super excited that as of today, ACK is available as a developer preview, supporting the following AWS services:

You can get started with installing and using ACK with our documentation. Note that developer preview means that the end-user facing install mechanisms are not yet in place.

In time, we expect to support and enable as many AWS services as possible, and onboard them with full support to ACK. Specifically, in the coming months we plan to focus on:

In addition to RDS and ElastiCache, we are also considering support for Amazon Elastic Kubernetes Service (EKS) as well as Amazon Managed Streaming for Apache Kafka (MSK).

Important features we’re working on and which should be available as well within the next couple of weeks and months include:

ACK is still a new project, and we’re looking for input from you to help guide our development. Conceptually, we are interested in your feedback about:

Starting today, during the AWS Container Day as well as during the entire KubeCon EU 2020 we will have a number of opportunities to discuss the current state of ACK and the next steps. Fire up your clusters, we can’t wait to see what you build!