Last night I spoke with Luca Cipriani from Arduino to learn more about the new AWS-powered Arduino Web Editor and Arduino Cloud Platform offerings. Luca was en-route to the Bay Area Maker Faire and we had just a few minutes to speak, but that was enough time for me to learn a bit about what they have built.

If you have ever used an Arduino, you know that there are several steps involved. First you need to connect the board to your PC’s serial port using a special cable (you can also use Wi-Fi if you have the appropriate add-on “shield”), ensure that the port is properly configured, and establish basic communication. Then you need to install, configure, and launch your development environment, make sure that it can talk to your Arduino, tell it which make and model of Arduino that you are using, and select the libraries that you want to call from your code. With all of that taken care of, you are ready to write code, compile it, and then download it to the board for debugging and testing.

Arduino Code Editor
Luca told me that the Arduino Code Editor was designed to simplify and streamline the setup and development process. The editor runs within your browser and is hosted on AWS (although we did not have time to get in to the details, I understand that they made good use of AWS Lambda and several other AWS services).

You can write and modify your code, save it to the cloud and optionally share it with your colleagues and/or friends. The editor can also detect your board (using a small native plugin) and configure itself accordingly; it even makes sure that you can only write code using libraries that are compatible with your board. All of your code is compiled in the cloud and then downloaded to your board for execution.

Here’s what the editor looks like (see Sneak Peek on the New, Web-Based Arduino Create for more): 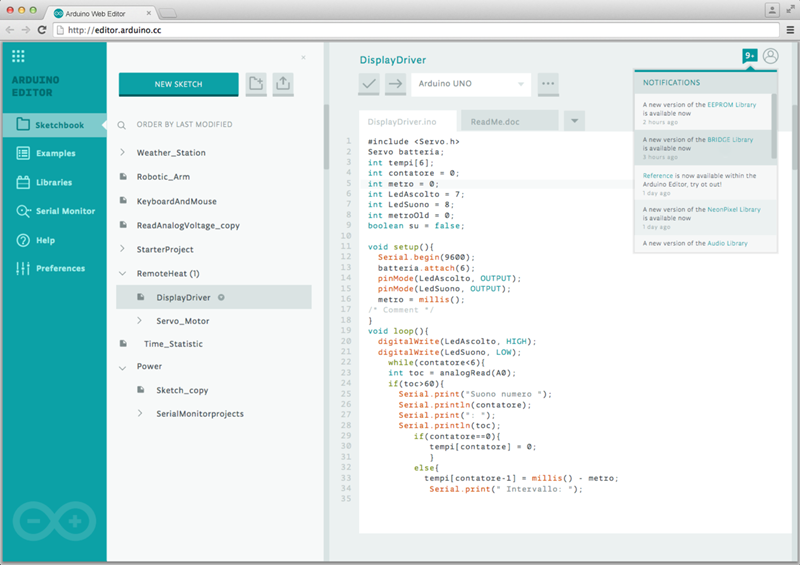 Because Arduinos are small, easy to program, and consume very little power, they work well in IoT (Internet of Things) applications. Even better, it is easy to connect them to all sorts of sensors, displays, and actuators so that they can collect data and effect changes.

The new Arduino Cloud Platform is designed to simplify the task of building IoT applications that make use of Arduino technology. Connected devices will be able to be able to connect to the Internet, upload information derived from sensors, and effect changes upon command from the cloud. Building upon the functionality provided by AWS IoT Core, this new platform will allow devices to communicate with the Internet and with each other. While the final details are still under wraps, I believe that this will pave the wave for sensors to activate Lambda functions and for Lambda functions to take control of displays and actuators.

I look forward to learning more about this platform as the details become available!