Even though cloud computing is a global phenomenon, location still matters when it comes to community. For example, customers regularly tell me that they are impressed by the scale, enthusiasm, and geographic reach of the AWS User Group Community. We are deeply appreciative of the work that our user group and community leaders do. 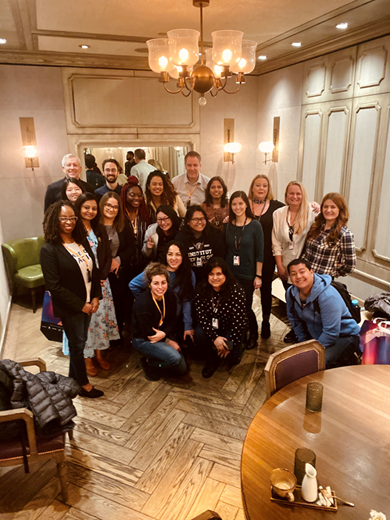 Each year, leaders of local communities travel to re:Invent in order to attend a series of events designed to meet their unique needs. They attend an orientation session, learn about We Power Tech (“Building a future of tech that is diverse, inclusive and accessible”), watch the keynotes, and participate in training sessions as part of a half-day AWS Community Leader workshop. After re:Invent wraps up, they return to their homes and use their new knowledge and skills to do an even better job of creating and sharing technical content and of nurturing their communities.

Community Leadership Grants
In order to make it possible for more community leaders to attend and benefit from re:Invent, we launched a grant program in 2018. The grants covered registration, housing, and flights and were awarded to technologists from emerging markets and underrepresented communities.

Several of the recipients went on to become AWS Heroes, and we decided to expand the program for 2019. We chose 17 recipients from 14 countries across 5 continents, with an eye toward recognizing those who are working to build inclusive AWS communities. Additionally, We Power Tech launched a separate Grant Program with Project Alloy to help support underrepresented technologists in the first five years of their careers to attend re:Invent by covering conference registration, hotel, and airfare. In total, there were 102 grantees from 16 countries.

The following attendees received Community Leadership Grants and were able to attend re:Invent:

Ahmed Samir – Riyadh, KSA (LinkedIn, Twitter) – Ahmed is a co-organizer of the AWS Riyadh User Group. He is well known for his social media accounts in which he translates all AWS announcements to Arabic.

Dzenana Dzevlan – Mostar, Bosnia (LinkedIn) – Dzenana is an electrical engineering masters student at the University of Sarajevo, and a co-organizer of the AWS User Group in Bosnia-Herzegovina.

Hiromi Ito – Osaka, Japan (Twitter) – Hiromi runs IT communities for women in Japan and elsewhere in Asia, and also contributes to JAWS-UG in Kansai. She is the founder of the Asian Woman’s Association Meetup in Singapore.

Hiro Nishimura – New York, USA (LinkedIn, Twitter) – Hiro is an educator at heart. She founded AWS Newbies to teach beginners about AWS, and worked with LinkedIn to create video courses to introduce cloud computing to non-engineers.

Sridevi Murugayen –  Chennai, India (LinkedIn) – Sridevi is a core leader of AWS Community Day Chennai. She managed a diversity session at the Community Day, and is a regular presenter and participant in the AWS Chennai User Group.

Sukanya Mandal – Mumbai, India (LinkedIn) – Sukanya leads the PyData community in Mumbai, and also contributes to the AWS User Group there. She talked about “ML for IoT at the Edge” at the AWS Developer Lounge in the re:Invent 2019 Expo Hall.

Seohyun Yoon – Seoul, Korea (LinkedIn) – Seohyun is a founding member of the student division of the AWS Korea Usergroup (AUSG), one of the youngest active AWS advocates in Korea, and served as a judge for the re:Invent 2019 Non-Profit Hackathon for Good. Check out her hands-on AWS lab guides!

Sandy Rodríguez – Mexico City, Mexico (LinkedIn) – Sandy co-organized the AWS Mexico City User Group and focuses on making events great for attendees. She delivered a 20-minute session in the AWS Village Theater at re:Invent 2019. Her work is critical to the growth of the AWS community in Mexico.

The following attendees were chosen for grants, but were not able to attend due to issues with travel visas:

Ayeni Oluwakemi – Lagos, Nigeria (LinkedIn, Twitter) – Ayeni is the founder of the AWS User Group in Lagos, Nigeria. She is the organizer of AWSome Day in Nigeria, and writes for the Cloud Guru Blog.

Ewere Diagboya – Lagos, Nigeria (LinkedIn, Twitter) – Ewere is one of our most active advocates in Nigeria. He is very active in the DevOps and Cloud Computing community as educator, and also organizes the DevOps Nigeria Meetup.