Instance Status Checks
You may remember that we recently introduced EC2 Instance Status Monitoring features to give you better visibility into the status of your AWS resources. We began by providing you with information about operational activities that have been scheduled for your EC2 instances. Since then, weve added more functionality.

You can now view status checks to help identify problems that may impair an instances ability to run your applications. These status checks are the results of automated tests performed by EC2 on every running instance that detect hardware and software issues. Whether you are running applications on AWS or elsewhere, diagnosing problems quickly and accurately can be difficult. For example, to determine that a faulty boot sequence has crashed before it initialized an instances networking stack or that an instance has failed to renew its DHCP lease, it helps to confirm first that the instance is powered on, and all networking equipment is performing as expected.

System status problems require AWS involvement to repair. We work hard to fix every one as soon it arises, and we are continually driving down their occurrence. However, we also want you to have enough visibility to decide whether you want to wait for our systems to fix the issue or resolve it yourself (by restarting or replacing an instance).

Instance Status checks detect problems within your instance. Typically, these are problems that you as a customer can fix, for example by rebooting the instance or making changes in your operating system. There is currently one Instance status check.

Over time, we will add to these checks as we continue to improve our detection methods.

We are also introducing a reporting system to allow you to provide us with additional information on the status of your EC2 instances.

You can access this functionality from the new DescribeInstanceStatus and ReportInstanceStatus APIs, the AWS Management Console, and the command-line tools.

Console Support
The status of each of your instances is displayed in the instance list: 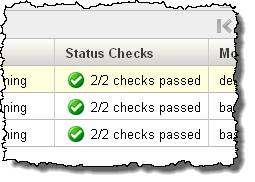 The console displays detailed information about the status checks when an instance is selected:

You can use the Submit Feedback button to report discrepancies between the reported status and your own observations or to provide more detail about issues you encounter: 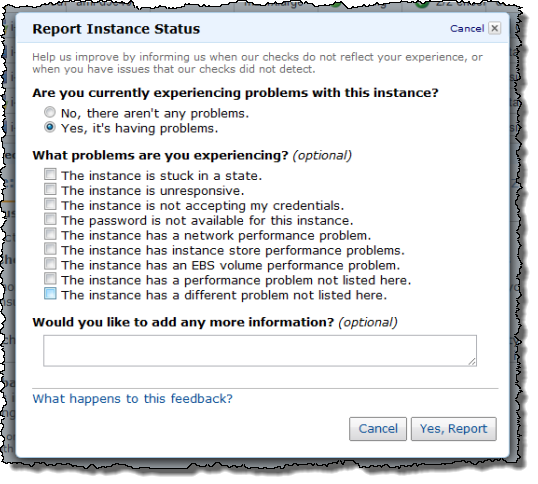 We will use the feedback entered in this form to identify issues that might be affecting multiple AWS customers and improve our detection systems accordingly. 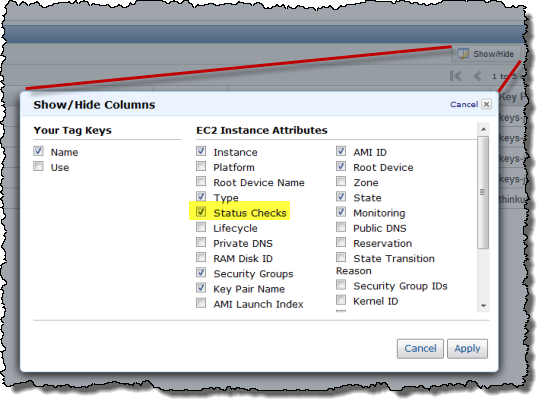