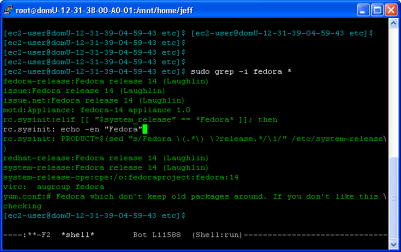 Earlier this month the Fedora Community released Fedora 14. At that time they also released an Amazon Machine Image (AMI) for EC2.

This is pretty big news — Fedora is one of the most popular Linux distributions around, with millions of copies running worldwide. The new version of Fedora includes new desktop, system administration, and developer features.

Just six months ago it was not possible to launch the previous version of Fedora in the cloud due to kernel incompatibilities. As of this launch, the Fedora team is now treating Amazon EC2 as a tier 1 platform that must be supported for launch.