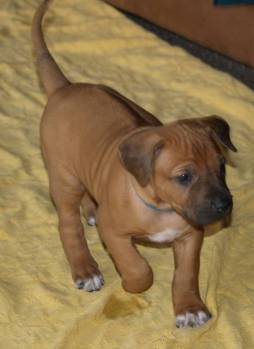 One of the great perks of working at Amazon is that you get to work with a bunch of great people and also with their dogs!

As previously noted in our blog, Rufus is a valued part of our Developer Relations team. He’s a Rhodesian Ridgeback owned by Martin Buhr. Martin works on business development for Amazon EC2 and as such he’s been pretty busy lately.

Rufus joined our team two years ago when he was just a puppy and he’s grown considerably since then. Or, in the local vernacular, he’s scaled up!

A couple of weeks ago Martin and I arrived at the office at about the same time. He was trying to get Rufus to settle down. Rufus wasn’t cooperating and Martin told me that Rufus was a bit bored. Jokingly I suggested that we could probably train Rufus to do some Mechanical Turk HITS. We both laughed it off and that was that. 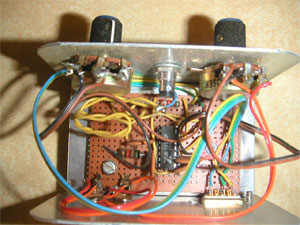 A few days later I mentioned this idea to Mike (once again in jest) but as we discussed the idea the conversation quickly went from silly to serious. Unsure of the level of cognitive skills that we could expect, we figured that Rufus and his kin could probably handle simple HITS which required him to discriminate between two alternatives, such as a dog bone vs. a soda bottle or a bird vs. a cat.

At this point we were still at the hypothetical stage but in our rarefied little world it was starting to seem like we could actually pull this off. Mike has tackled some pretty cool electrical and electronics projects in the past (including the nifty digital to analog converter pictured at right) and it was good to have his expertise available. 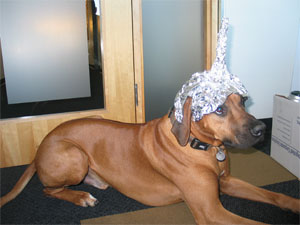 Mike and I batted around a few ideas for the DCI (Dog-Computer-Interface), starting with some sort of brainwave sensor feeding into the converter. We prototyped this and tried it out on Rufus. He was surprisingly patient. We fitted the sensors into a tin-foil hat which we molded to fit Rufus’ head.

We uploaded the raw data into a 10 node cluster of EC2 instances in an attempt to make heads or tails of it but our analytic skills were not up to the task and we had to abandon this aspect of the experiment and head back to the drawing board. 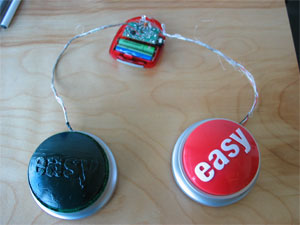 Jinesh suggested a more direct Yes/No interface and volunteered to build it for us. Starting with a pair of Staples Easy buttons, he wired up a clean and straightforward input system that would accommodate Rufus’ paws. This seemed like a much better solution and we were pretty optimistic about it.

Martin had been humoring us in the background but he was starting to think that it might work. We started to give some consideration to types of HITS that Rufus could do. Martin said that Rufus was pretty good at identifying bears, so that seemed like a good start, even if it was of somewhat limited value. This was a proof of concept, after all. 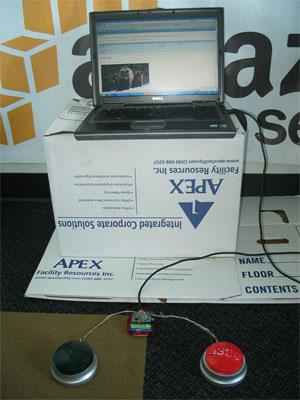 We hooked the buttons up to a spare laptop and propped it up on a box so that Rufus could reach it without too much trouble. 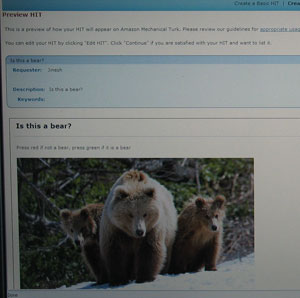 Jinesh created some “Is This a Bear?” HITS and we were just about ready to go.

Martin used up almost half of a box of dog biscuits in the process of training Rufus to look at the screen. He’s a smart dog, but there were all sorts of distractions and it was tough to get him to focus on the task at hand. 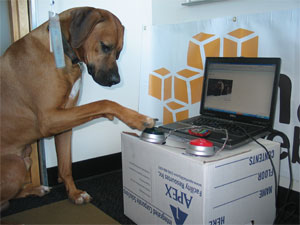 Believe it or not, he actually got pretty good at hitting the proper button before too long. As you can see from the picture at right, the Easy buttons were just right for his gigantic paws.

Once he got going, Rufus was pretty good at identifying the bears in the picture, with an accuracy rate in excess of 80%. Admittedly, the task itself was of limited utility but that wasn’t the point.

Rufus has yet to notice that we’ve recycled the HITS and he now spends an hour or so each day happily sorting out the bears from the non-bears. 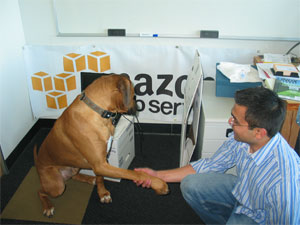 This was a really fun project and we learned a lot by doing it. As you can see from the picture at right, Jinesh and Rufus certainly became good friends.

We’ve actually got a number of great job openings one the Amazon Web Services team right now; if you like to work hard and play hard, and hang out with great people and their dogs, you should check out the Amazon Jobs site today.

We had a lot of fun putting this little experiment together and we’d like to thank Martin and Rufus for all of their help. You can only pull off something like this once a year, and today was definitely the day to do it.