You can now launch Amazon EC2 instances from an AMI backed by Amazon EBS (Elastic Block Store). This new functionality enables you to launch an instance with an Amazon EBS volume that serves as the root device.

This new feature brings a number of important performance and operational benefits and also enables some really powerful new features:

Let’s compare and contrast the original S3-based boot process and the new EBS-based process. Here’s what happens when you boot from an AMI that references an image residing in S3:

Now, here’s what happens when you boot from an AMI that references an image residing in EBS:

Up until this point the two processes are quite similar. However, the new model allows the instance to be stopped (shut down cleanly and the EBS volumes preserved) at any point and then rebooted later. Here’s the process:

When the instance is finally terminated, the EBS volumes will be deleted unless the deleteOnTermination flag associated with the volume was cleared prior to the termination request.

We made a number of other additions and improvements along the way including a disableApiTermination flag on each instance to protect your instances from accidental shutdowns, a new Description field for each AMI, and a simplified AMI creation process (one that works for both Linux and Windows) based on the new CreateImage function. 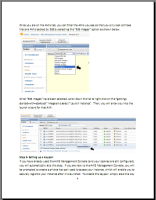 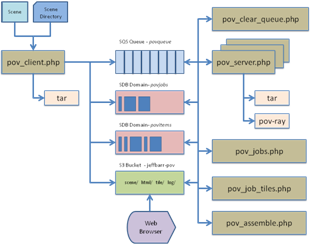 I recently spent some time using this new feature and I had an enjoyable (and very productive) time doing so.

I built a scalable, distributed ray tracing system around the venerable POV-Ray program. I was able to test and fine-tune the startup behavior of my EC2 instance without the need to create a new AMI for each go-round. Once I had it working as desired, I created the AMI and then enjoyed quicker boot times as I brought additional EC2 instances online and into my “farm” of ray-tracing instances.

I’ll be publishing an article with full details on what I built in the near future, so stay tuned!