Update (September 23, 2015): The 2012-era report mentioned in the blog post has been superseded by a newer one published in 2015. The post has been updated accordingly. 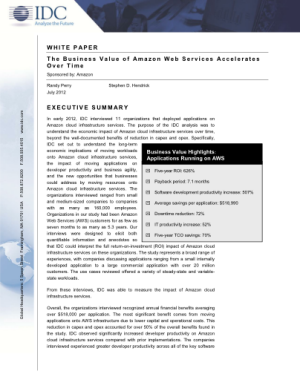 Analysts Randy Perry and Stephen Hendrick of IDC have just published a commissioned white paper titled The Business Value of Amazon Web Services Accelerates Over Time. You can download the paper now by clicking on the image at right.

Earlier this year, IDC interviewed 11 organizations that use AWS in an effort to understand the long-term economic implications of moving their workloads to the cloud. As part of the study they also looked for changes in developer productivity, business agility, and the ability to deliver new applications that could be attributed to AWS. The AWS customers that they talked to included Samsung, BankInter, Fox, Netflix, Tomlinson Real Estate Group, United States Tennis Association, and Cycle Computing.

The paper contains a complete recitation of their findings. To summarize:

Our customers ran (and measured) both steady-state and variable-state workloads. They ranked these workloads as very critical (4.5 out of 5). In addition to costs savings, they were able to increase their business agility, and brought their applications to market far more quickly.