Amazon DevPay is pretty cool. It allows developers to use Amazon’s billing and account management to layer their own business models on top of Amazon EC2 and Amazon S3. Developers using DevPay include SmugMug (for SmugVault), Wowza Media Systems, Red Hat, and SearchBlox. 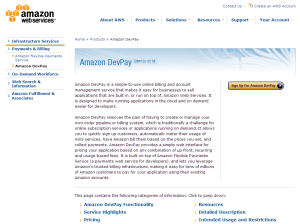 How, you may ask, are lower fees a feature? Well, it turns out that many developers would like to use DevPay to simply pass their actual AWS charges through to their customers without marking them up. The new release makes this possible because the 3% DevPay fee is now charged only on the value added by the developer. There’s still a 30 cent fee for processing each payment.

The new fee structure will be of value to developers using DevPay on top of EC2 because it allows them to pass on bandwidth charges directly. There is no longer a need to add an additional markup to cover the fees that were formerly charged on Amazon’s share of the cost. This directly leads to a business model which is both better from an economic perspective and simpler from a structural perspective.

The net result of these changes is that the fees developers will pay to use DevPay will be lower. Developers will also pay less in the event that their customers don’t pay.

It is worth pointing out that both of these features were implemented as a direct result of customer feedback which started in a thread on the AWS Discussion Forum for DevPay. We’re here, and we are listening, but you’ve got to speak up if you want to be heard!