Now Available – Version 3 of the AWS SDK for PHP

Back in the spring of 2002 I wrote a simple PHP wrapper around the then-new Amazon E-Commerce Service. This little wrapper caught Amazon’s attention and before I knew it I was a member of the Amazon Associates team! Later, when I decided to write a book to show people how to use AWS, PHP was the natural choice, along with the AWS SDK for PHP (formerly CloudFusion (formerly Tarzan)). Sadly, my coding skills have atrophied somewhat since then, but I still remain optimistic that I’ll be able to revive them at some point. 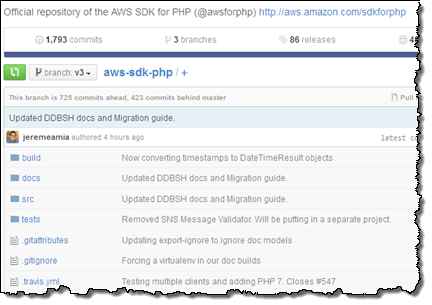 Today I am happy to announce that version 3 of the AWS SDK for PHP, a product that resonates with two significant themes in my professional experience, is now available via Composer and on GitHub.

This version of the SDK was built in response to the feedback that we have received on version 2 over the last couple of years. It upgrades the dependencies, improves performance, and was built in accord with the latest PHP standards.

You can now make asynchronous calls to AWS. The calls return Promises; after you issue the call you can wait for it to complete and then access the result. You can chain multiple calls together to create an asynchronous workflow. Promises are also used to implement higher-level abstractions in the SDK including Paginators, Waiters, and the S3 MultipartUploader.

To learn more, read Version 3 of the AWS SDK for PHP is Released on the AWS PHP Developer Blog.