Today we are giving you yet another option, with support for encryption of EBS data volumes and the associated snapshots. You can now encrypt data stored on an EBS volume at rest and in motion by setting a single option. When you create an encrypted EBS volume and attach it to a supported instance type, data on the volume, disk I/O, and snapshots created from the volume are all encrypted. The encryption occurs on the servers that host the EC2 instances, providing encryption of data as it moves between EC2 instances and EBS storage.

Enabling Encryption
You can enable EBS encryption when you create a new volume:

You can see the encryption state of each of your volumes from the console: 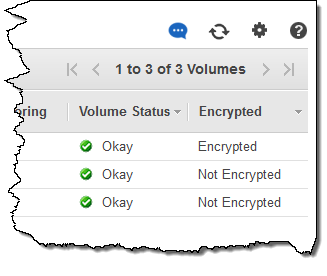 Important Details
Adding encryption to a provisioned IOPS (PIOPS) volume will not affect the provisioned performance. Encryption has a minimal effect on I/O latency.

The snapshots that you take of an encrypted EBS volume are also encrypted and can be moved between AWS Regions as needed. You cannot share encrypted snapshots with other AWS accounts and you cannot make them public.

As I mentioned earlier, your data is encrypted before it leaves the EC2 instance. In order to be able to do this efficiently and with low latency, the EBS encryption feature is only available on EC2’s M3, C3, R3, CR1, G2, and I2 instances. You cannot attach an encrypted EBS volume to other instance types.

Also, you cannot enable encryption for an existing EBS volume. Instead, you must create a new, encrypted volume and copy the data from the old one to the new one using the file manipulation tool of your choice. Rsync (Linux) and Robocopy (Windows) are two good options, but there are many others.

Each newly created volume gets a unique 256-bit AES key; volumes created from encrypted snapshots share the key. You do not need to manage the encryption keys because they are protected by our own key management infrastructure, which implements strong logical and physical security controls to prevent unauthorized access. Your data and associated keys are encrypted using the industry-standard AES-256 algorithm.

Encrypt Now
EBS encryption is available now in all eight of the commercial AWS Regions and you can start using it today! There is no charge for encryption and it does not affect the published EBS Service Level Agreement (SLA) for availability.