Provision Up to 4,000 IOPS per EBS Volume, New Marketplace Support

We are also introducing support for Provisioned IOPS in the AWS Marketplace with new products from 10Gen, NuoDB, and Omnibond. With this new support, you can now find, compare, and start the software that you need with 1-click, while specifying the desired level of performance. For more information, visit the new AWS Marketplace Provisioned IOPS page. Here are some initial reactions to this new feature:

Provisioned IOPS volumes are designed to deliver predictable, high performance for I/O intensive workloads such as databases, business applications and enterprise applications. You can set the level of performance you need and EBS will consistently deliver it over the lifetime of the volume. 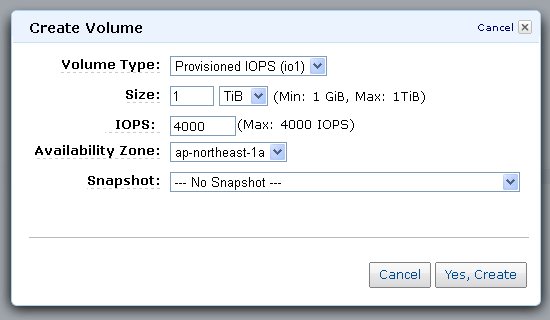 To take full advantage of high performance Provisioned IOPS volumes, we recommend the use of EBS-Optimized EC2 instances. Available for our m1.large, m1.xlarge, m2.2xlarge, m2.4xlarge, m3.xlarge, m3.2xlarge, c1.xlarge and instance types, these instances feature dedicated throughput between EC2 and EBS.