VerbalizeIt – Scaling a SaaS Platform for the Shark Tank

When you travel as much as I do, you tend to think about getting sick or injured while away from home. I don’t worry too much about the quality of the care that’s available in the developed world, but I do worry about being able to explain my symptoms and to understand the diagnosis and the preferred treatment.

The Problem
Ryan Frankel of VerbalizeIt found himself in this very predicament while traveling in China a few years ago. He was violently ill and was not able to communicate with the pharmacist to understand what he had been prescribed. After he regained his health, he realized that there was an opportunity to use technology to connect anyone in need of translation services with a worldwide network of multilingual people. He investigated what was available and saw that there was market gap. On the one side, machine translations were quick and often free, but not especially accurate. On the other side, dedicated call centers provided accurate results at a high cost.

The Solution
Ryan decided to fill in the gap and created VerbalizeIt, a human-powered translation service, with the goal of providing call center quality at prices more often associated with machine translation. He wanted to create a Software as a Service (Saas) platform and a market that would allow people to monetize their translation skills.

He expanded his team and they took part in TechStars. Things started taking off, they rebuilt their platform on top of AWS to increase scalability, and then applied and were selected to appear on the season finale of ABC’s hit show Shark Tank. The episode was shown on May 17th, during the all-important “sweeps week,” to an estimated 7 to 10 million viewers.

Here’s an overview that will show you how VerbalizeIt works:

Ready to Scale
The team at VerbalizeIt knew that they had a one-time opportunity to make their service known to millions of TV viewers. The web site had to scale, not just once, but in each time zone and then again for re-runs. A team of AWS Solutions Architects reviewed the design and the implementation to make sure that it made efficient use of EC2, S3, and CloudFront.

The VerbalizeIt also worked to scale the human side, making sure that they had access to enough qualified interpreters to efficiently handle a large increase in demand.

I asked Ryan and his team at VerbalizeIt to capture some metrics and some graphs to give a behind the scenes look at what happens when your web site is featured on prime time television. Here’s what they saw: 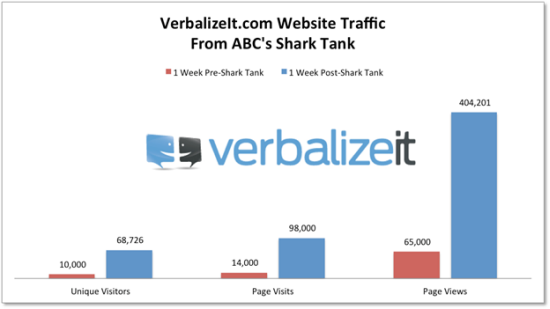 VerbalizeIt for Developers
During my conversation with Ryan I learned that VerbalizeIt is also a platform and that it has APIs for developers! The API is simple and effective. After you get an API key, you can call APIs for voice and text translation. The voice translation API facilitates a phone call to a suitable translator. You start by calling the languages function. It returns a list of language names and the associated codes. Then you call the live_translation_requests function with the desired pair of languages and a phone number. The function will return another phone number, which will be expecting a call from the one passed to the function.