For many enterprises however, deploying straight from the developer’s workstation to the AWS Cloud isn’t something they would approve of, and instead, they have adopted a more automated centralized deployment model. So the question is now: can the same Docker Compose file that is used during development on a workstation be used to deploy to a production environment in a more controlled manner? And we believe the answer, by leveraging Docker Compose for Amazon ECS, is yes.

Depending on the size and governance inside of an organization, the number of steps to take an application from a developer’s workstation to production could vary greatly. So in this blog post, we will assume a few requirements that a solution needs to meet.

In this blog post, we want to highlight how you could take a Docker Compose file and deploy it in an automated fashion through a pipeline, a more common approach to rolling out a microservices-based application. In this walk through, we will leverage AWS CodePipeline and AWS CodeBuild, however, these steps could be adapted to suit an existing CI/CD pipeline in your environment.

The steps involved in this sample pipeline are as follows:

One of the important steps in the walk through Pipeline is that we convert the Docker Compose to CloudFormation for the production roll out. There is no hard requirement to do this, within our pipeline we could run docker compose up within CodeBuild and the latest Docker Compose file is deployed to the production environment, as is the case in Massimo’s blog.

If you are working in an agile environment or maybe you have a small change control process, then this is fine. However in many circumstances, especially in larger enterprises, a manual approval process in a pipeline is a good thing as it provides time for other members of the team to review the change before it rolls out to production. When this manual approval occurs, we believe a CloudFormation change set is an appropriate way to view the changes about to be made in the environment. Even though a code change may have been reviewed in a GitHub pull request, the underlying change on the infrastructure may be hard to spot. The Docker Compose for ECS plugin controls a lot more than just rolling out a new version of a microservice. The great abstraction provided by Docker Compose means that a lot more of the AWS infrastructure is defined in the Docker Compose framework. The security groups, the load balancers, and the IAM roles and policies can all be updated as a result of a change in Docker Compose; these items are often critical items in a production environment which would justify a manual gate to review.

If everything has worked correctly, you can now navigate to http://localhost in your web browser and you should see the sample application. Feel free to click the button to test that the 2 tiers of the application are communicating correctly over the local Docker network bridge. 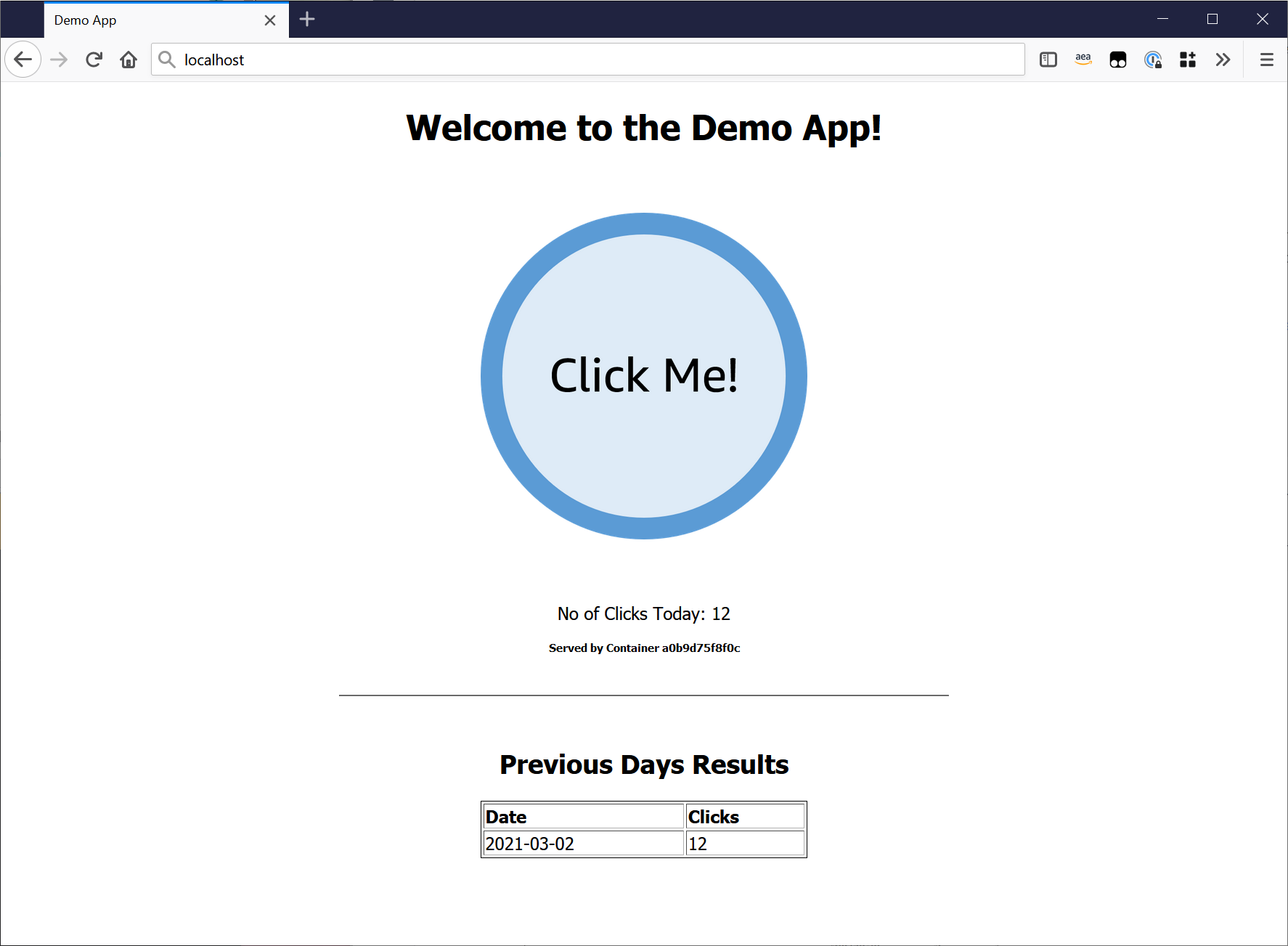 The sample application Docker Compose file is quite straight forward, if deployed locally this compose file contains a frontend service, backend service, a Docker network to connect the two containers, and finally a Docker volume to store the Redis state.

However, some interesting things happen if we then deploy this through the Docker Compose to ECS plugin.

One of the core intentions here is to keep the Docker Compose file generic, not hard coding variables, allowing it to be environment agnostic (i.e. development / testing / production). The Amazon VPC, ECS cluster, and load balancer values, alongside the Image URI and Tag are set with environment variables. These environment variables are set in the various CodeBuild stages in the CI/CD pipeline. When a developer is working on their application locally the x-aws-* variables defined in the compose file are ignored, so variables do not need to be set on their workstation.

For this walk through, we will deploy a Docker Compose file in to existing AWS infrastructure. The Docker Compose for ECS plugin could create all of the prerequisites for you, however, to simulate a production-like environment, our infrastructure will be deployed separately. If you do not have an existing VPC and ECS Cluster in place, a CloudFormation template within the sample application git repository can give you a head start. 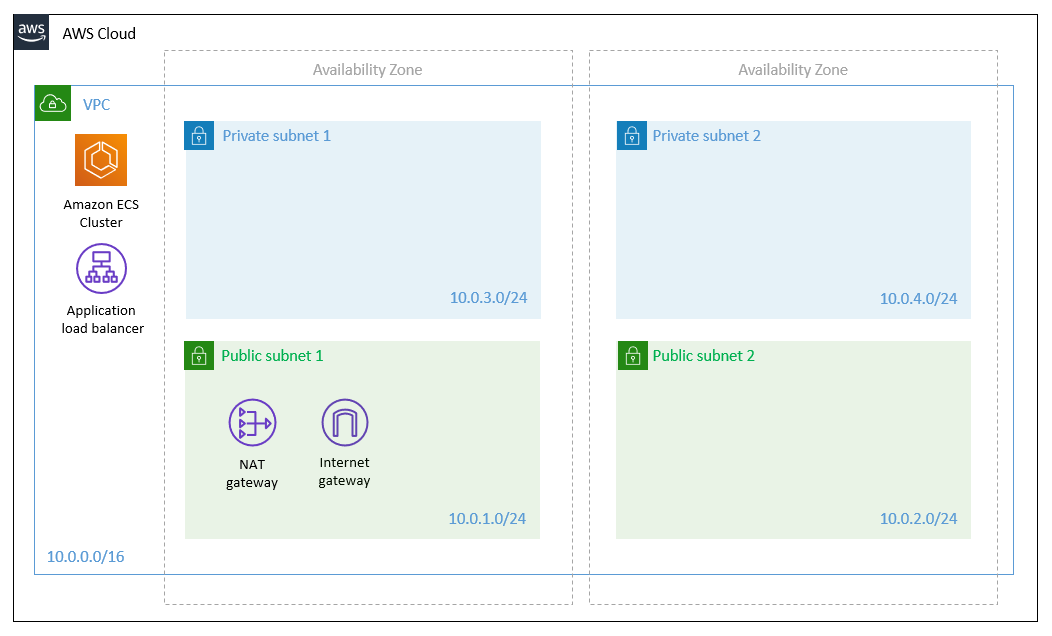 This sample CloudFormation template will create a VPC, Public and Private Subnets, and an Amazon ECS cluster following AWS best practices. The sample template will also create an Application Load Balancer that will front the sample application. There is an assumption at this stage, that the awscli is already installed on your workstation, with the relevant IAM credentials to create the networking infrastructure in an AWS account.

The VPC ID, ECS cluster, and Application Load Balancer ARN will be needed later in the pipeline. If you are leveraging the sample CloudFormation template, these can be set as local variables by running the following commands when the CloudFormation stack has been successfully deployed:

If you browse to the AWS CodePipeline in the AWS Management Console, the recently deployed pipeline should be created. The pipeline will have failed its first run as there are currently no objects stored in the newly created S3 bucket. 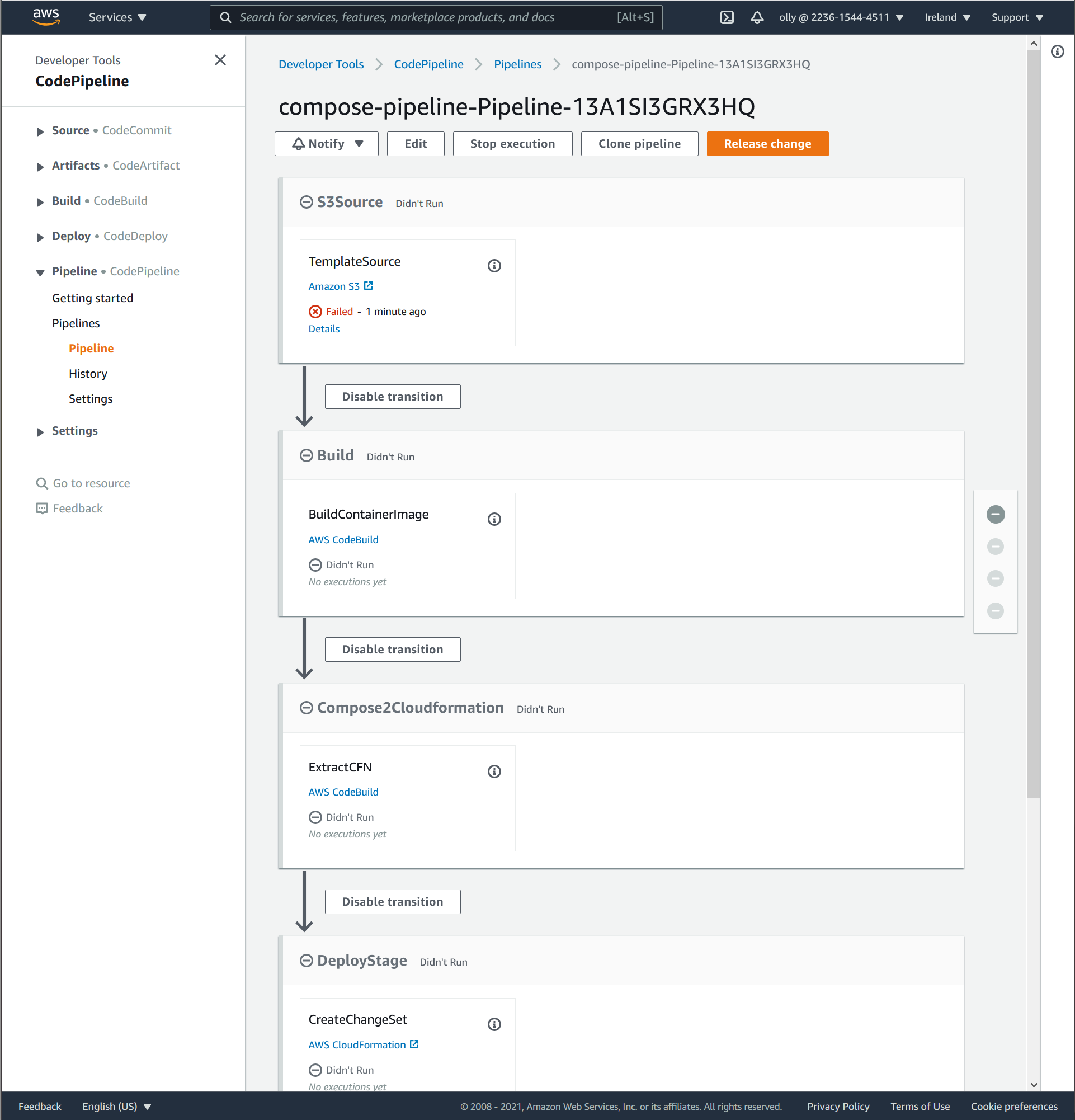 Deploy the sample application to AWS

Following the image build, the Docker Compose file will then be converted into CloudFormation. The following CodeBuild BuildSpec file is also embedded within the Pipeline CloudFormation Template for the “Convert2Cloudformation” stage.

This BuildSpec file will do the following:

You can track the progress of the deployment through via AWS CodePipeline in the console, and eventually the pipeline will pause at the manual approval stage. 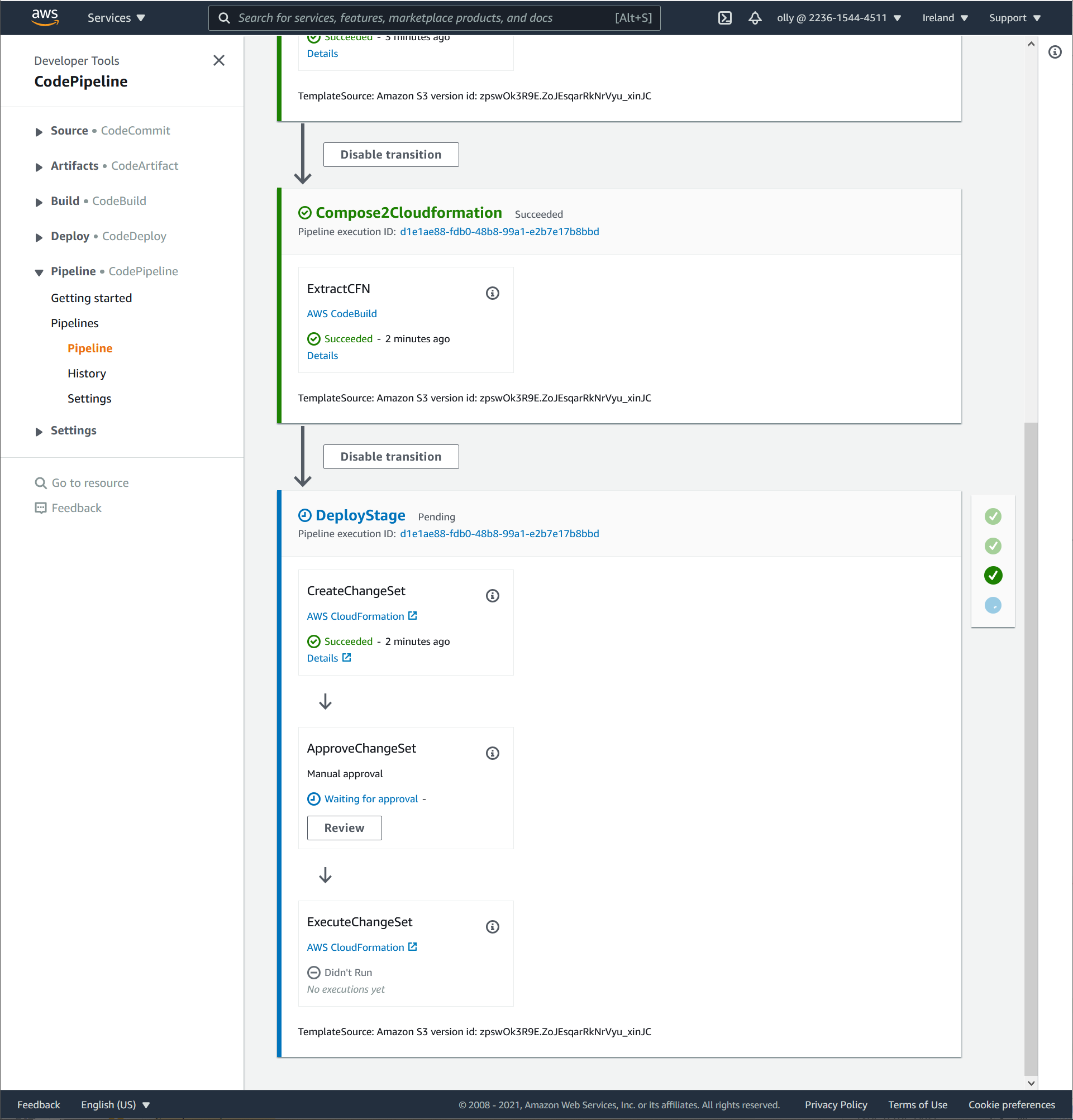 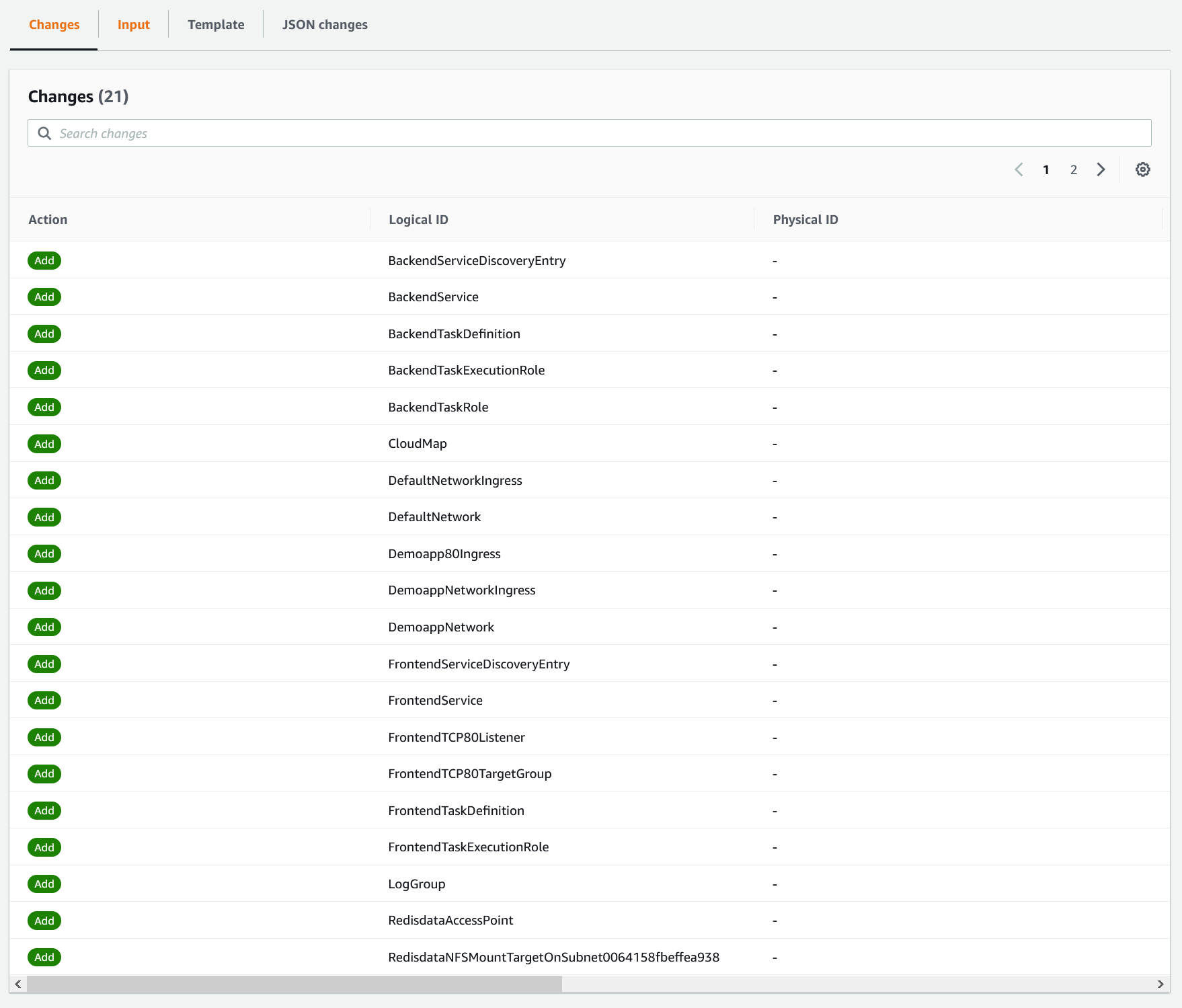 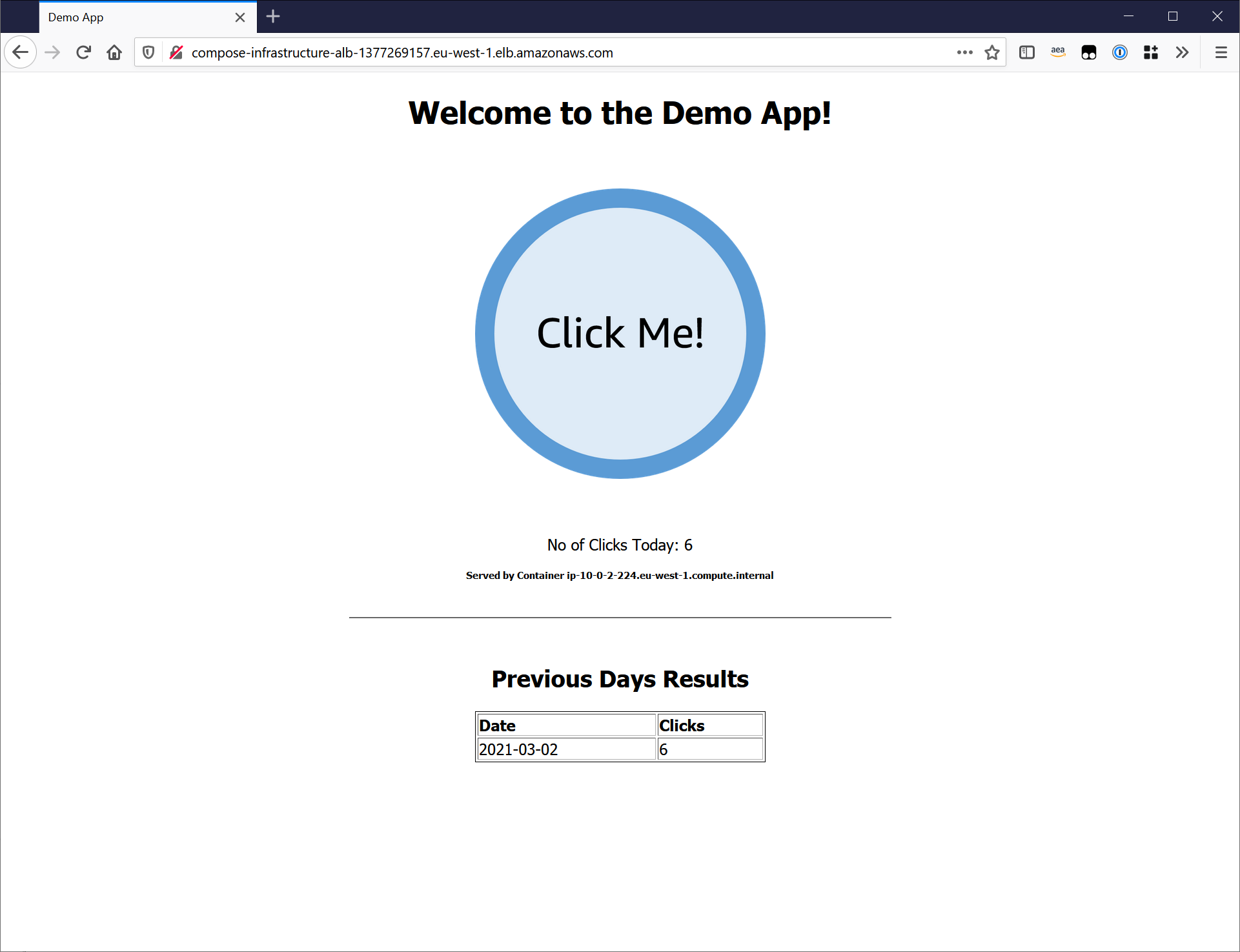 To simulate the life cycle of the stack we created, we will make a small change to the sample application. Changing the color of the Frontend’s “Click Me” button provides a nice visual change in the application, allowing us to observe the change as the ECS rolling update deploys the new version of the application.

Using a local Docker Engine running on your workstation machine, we can once again deploy the sample application through Docker Compose to make sure the change has had its required effect. 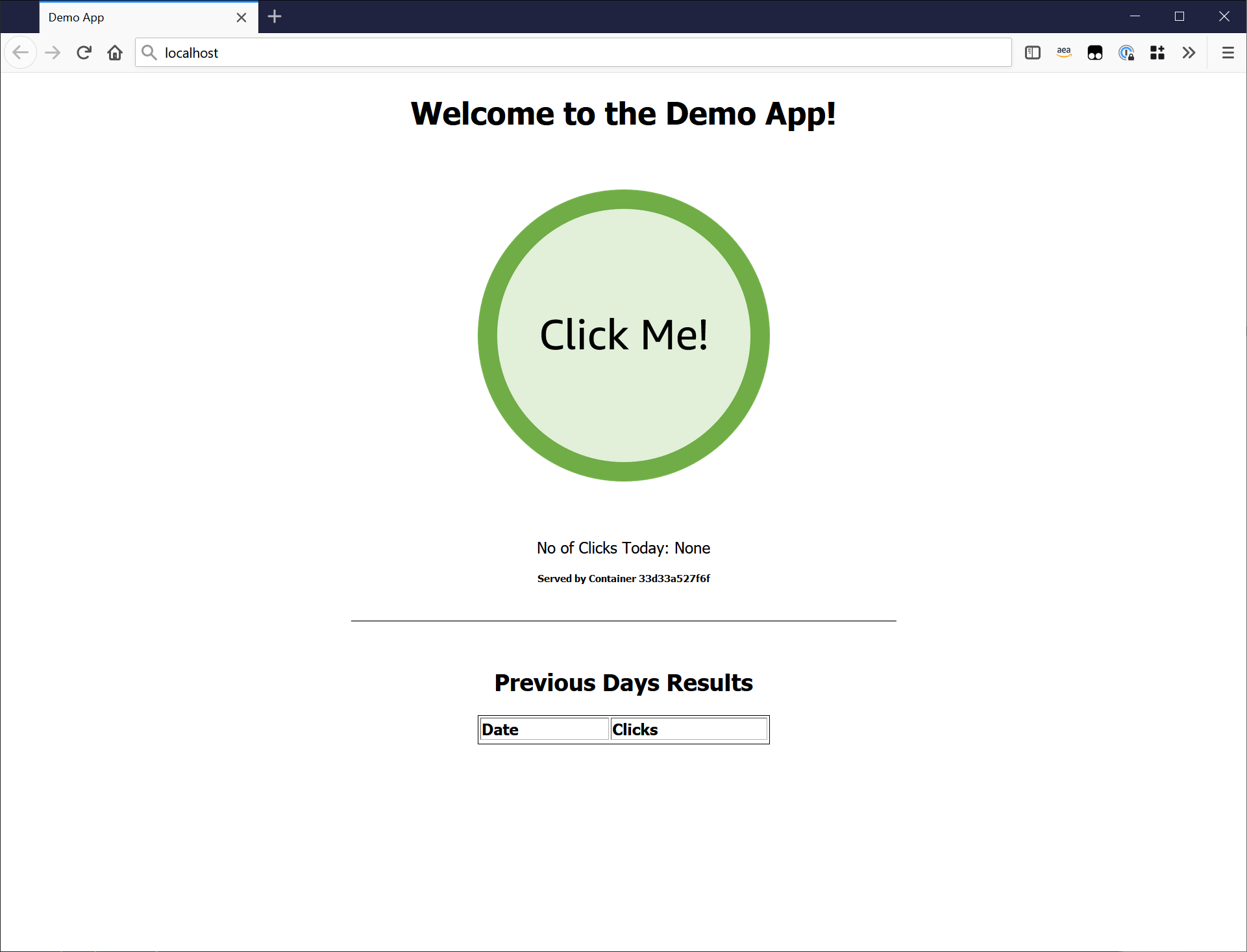 Success! Now we can re-zip up the sample application and upload it to the S3 bucket, and deploy the application to the AWS cloud.

Once again, you can now follow along with the pipeline in AWS CodePipeline via the AWS Management Console. After the container has been built and a CloudFormation change set has been created, it will once again stop at the manual approval gate. This time, when reviewing the upcoming changes to the Cloud Formation, we can see there is less change to our infrastructure.

Once the DevOps / Operations team have checked that the resource changes in the change set are expected and have approved the change in the CodePipeline Console, ECS will perform a rolling update on the Frontend service. It will take a few minutes for the new version of our application to be deployed, as the Load Balancer will safely drain the previous ECS tasks before decommissioning them. After the CloudFormation roll out is complete, the new version of the application should be available on the same Load Balancer Endpoint. 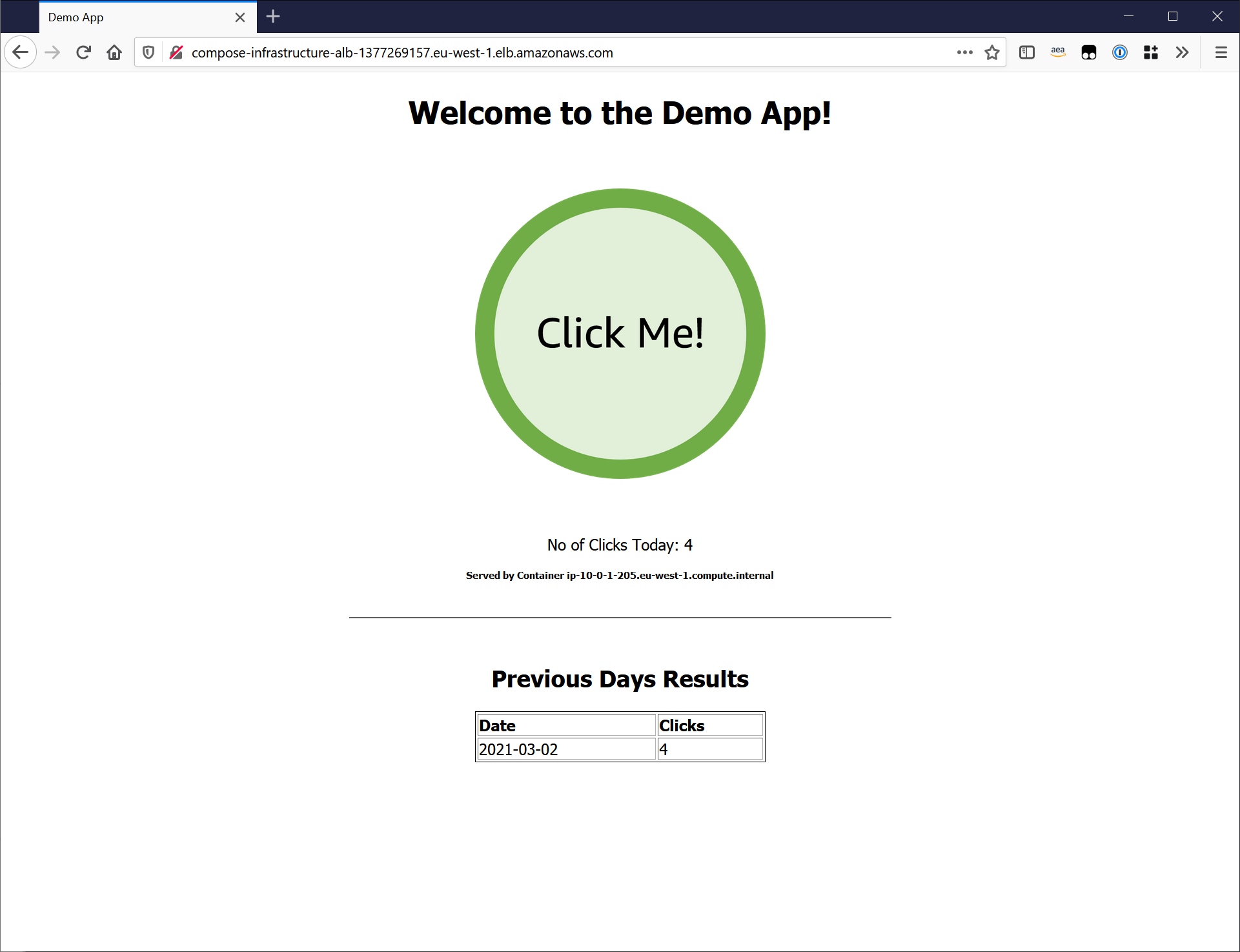 Excellent! Feel free to make additional changes to the application, possibly changing the index.html , and rolling out new versions of our application through the pipeline.

This article has shown how a Docker Compose file, defined and owned by the developer teams, can live along side application source code and be deployed through a centrally managed deployment pipeline to Amazon ECS.

In this article, we have: