In the first part of this series, we discussed the history of GitOps, its benefits, and how it works. Now that you have an idea of what GitOps is all about, we’re going to dive into how to configure a GitOps pipeline with Flux and Amazon EKS for application deployments.

What do we need for GitOps on AWS?

These are the tools that you’ll be working with in order to create a basic GitOps pipeline for application deployments or for cluster components. If you were running this in production, you would also need an additional component to scan base images for added security.

You will need the following services:

In this example, you will install the standard Guestbook sample application to EKS. Then you’ll make a change to the button style and deploy the change to EKS with GitHub Actions and GitOps.

You will need a GitHub account for this step.

1. Set up permissions for eksctl:

2. Stand up the cluster:

In this section, you will set up an ECR registry and a mini CI pipeline using GitHub Actions. The actions builds a new container on a `git push`, tags it with the git-sha, and then pushes it to the ECR registry. It also updates and commits the image tag change to your kustomize file. Once the new image is in the repository, Flux notices the new image and then deploys it to the cluster. This entire flow will become more apparent in the next section after you’ve configured Flux.

Open ECR in the same region that your cluster is running.  You can call the repository guestbook.

ECR is an encrypted container repository and as a result any images pulled to and from it need to be authenticated. You can specify secrets for ECR in the Settings → Secrets tab on your forked guestbook-gitops repository. These are needed by the GitHub Actions script before it can push the new image to the container registry.

The secret access key is found on your AWS Account ID and is obtainable from the AWS Management Console or by running aws sts get-caller-identity and the new user’s key ID and the secret key (found in your ~/.aws/credentials file). 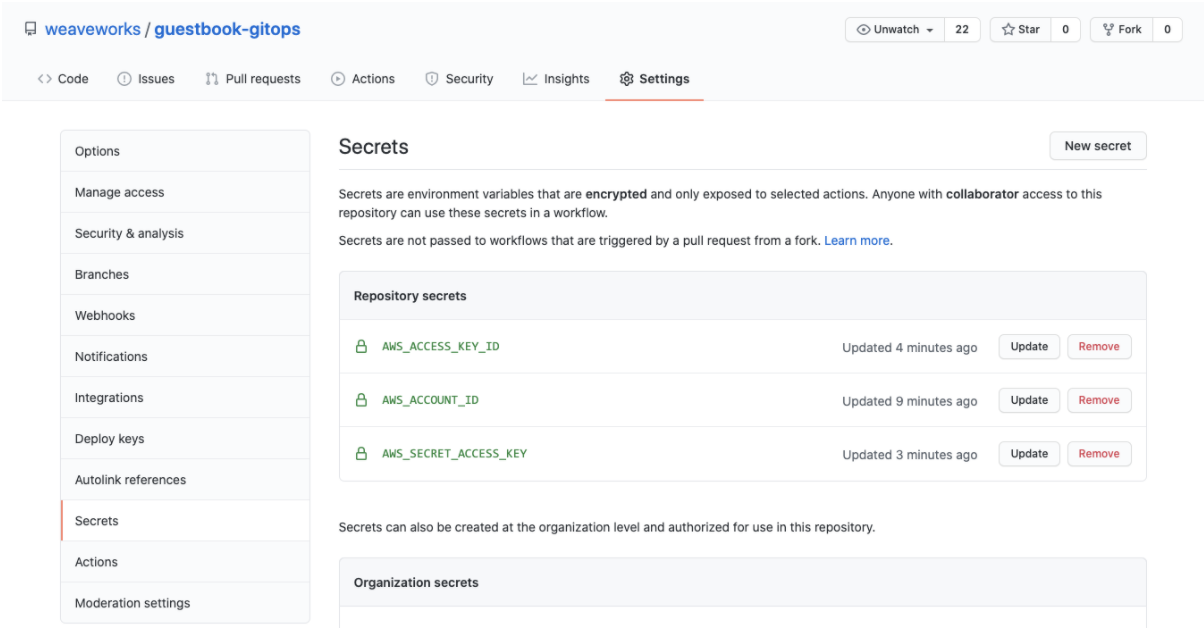 View the workflow in your repo under .github/workflows/main.yml. Ensure you have the environment variables on lines 16-20 of main.yml set up properly.

Line 16 is the region where your EKS cluster resides. This should match the region in your ~/.aws/config or the region you specified when you ran `aws configuration`.

Flux keeps Kubernetes clusters in sync with configuration kept under source control like Git repositories, and automates updates to that configuration when there is new code to deploy. It is built using Kubernetes’ API extension server, and can integrate with Prometheus and other core components of the Kubernetes ecosystem. Flux supports multi-tenancy and syncs an arbitrary number of Git repositories.

In this section, we’ll set up Flux to synchronize changes in the guestbook-gitops repository. This example is a very simple pipeline that demonstrates how to sync one application repo to a single cluster, but as mentioned, Flux is capable of a lot more than that. For an overview of all of Flux’s features, refer to this page for more detail on what’s in Flux v2.

1. For MacOS users, you can install flux with Homebrew:

For other installation options, see installing the Flux CLI.

2. Once installed, check that your EKS cluster satisfies the prerequisites:

If successful, it returns something similar to this:

Flux supports synchronizing manifests in a single directory, but when you have a lot of YAML, it is more efficient to use Kustomize to manage them. For the Guestbook example, all of the manifests were copied into a deploy directory and a kustomization file was added. For this example, the kustomization file contains a `newTag` directive for the frontend images section of your deployment manifest:

As mentioned above, the Github Actions script updates the image tag in this file after the image is built and pushed, indicating to Flux that a new image is available in ECR.

3. But before we see that in action, let’s install Flux and its other controllers to your cluster.

In order to create the reconciliation repository for Flux, you’ll need a personal access token for your GitHub account that has permissions to create repositories. The token must have all permissions under repo checked off. Copy and keep your token handy and in a safe place.

4. Create the Flux reconciliation repository. In this case we’ll call it fleet-infra, but you can call it anything you want.

In this step, a private repository is created and all of the controllers will also be installed to your EKS cluster. When bootstrapping a repository with Flux, it’s also possible to apply only a sub-directory in the repo and therefore connect to multiple clusters or locations on which to apply configuration. To keep things simple, this example sets the name of one cluster as the apply path:

Flux version 2 lets you easily work with multiple clusters and multiple repositories. New cluster configurations and applications can be applied from the same repo by specifying a new path for each.

Once it’s finished bootstrapping, you will see the following:

[guestbook] is the name of your app or service

[cluster-name] is the cluster name

[github-user-id/guestbook-gitops] is the forked guestbook repository

You should now see the latest revisions for the flux toolkit components as well as the guestbook-gitops source pulled and deployed to your cluster:

Check that all of the services of the guestbook are deploying and running in the cluster with:

If you have any trouble with configuring Flux, run these commands to see how everything is setup and help you troubleshoot any set up errors:

To see all of the commands you can run with Flux run:

5. Make a change to the guestbook app and deploy it with a `git push`

Note: If you’d like to see the Guestbook UI before you make a change, kick off a build by adding a space to the index.html file and pushing it to git.

Let’s make a simple change to the buttons on the app and push it to Git:

Once you’ve made the change to the buttons do a, `git add`, `git commit` and `git push`. Click on the Actions tab in your repo to watch the pipeline test, build, and tag the image. 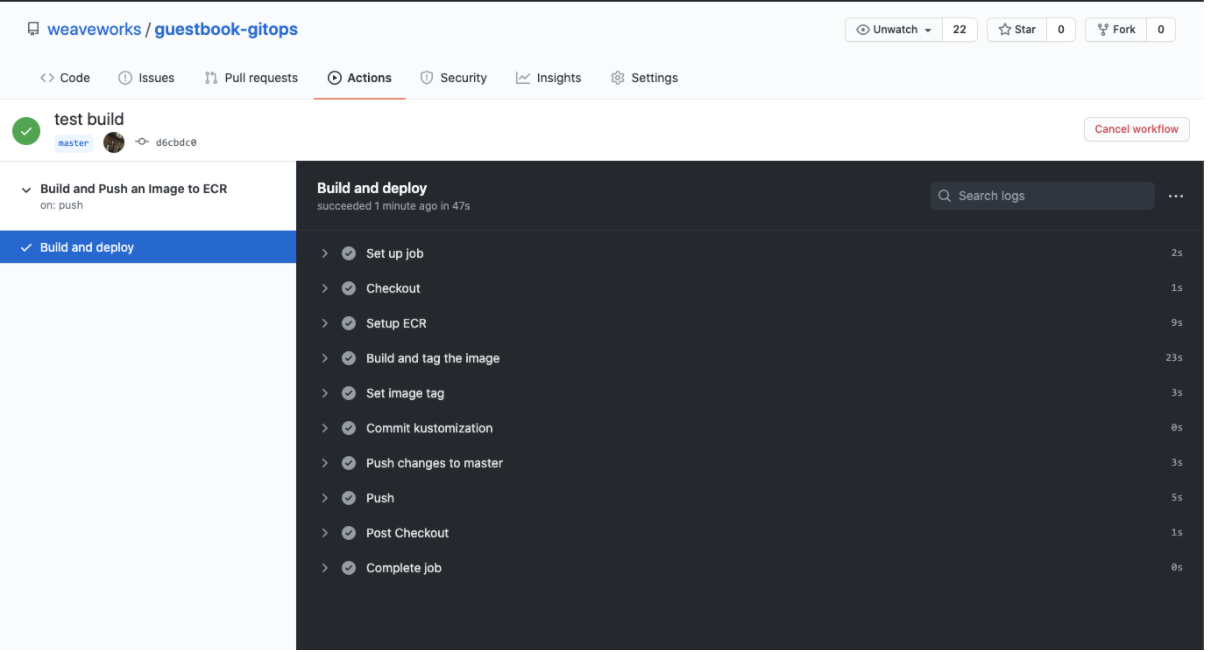 Now check to see that the new frontend images are deploying:

Display the Guestbook frontend in your browser by retrieving the URL from the app running in the cluster with:

The response should be similar to this:

Now that you have Flux set up, you can keep making changes to the UI, and run the change through GitHub Actions to build and push new images to ECR. Flux will notice the new image and deploy your changes to the cluster, kicking your software development into overdrive.

To delete the cluster, run:

These two posts explain GitOps concepts and its origins. We then demonstrated how to pull together a GitOps pipeline for application deployments. This is one example of how to leverage GitOps.