In this post, we will address this challenge and touch on a subset of customer use cases and architectures.

ROSA private clusters with PrivateLink can be deployed via the ROSA CLI, however, they must be deployed into an existing VPC. We will need to provide three subnet IDs of private subnets within the existing VPC.

Deploying ROSA in an interactive mode:

or you can pass a single command:

The ROSA install process will still require the EC2 instances to have egress access to the internet, either via an internet gateway or via routing to an egress point elsewhere. We will discuss this in greater detail later when we look at the VPCs.

The ROSA OpenShift cluster itself deploys in the same manner as other deployment options. There will still be Master, Infrastructure, and Worker nodes deployed into private subnets, spanning three AWS Availability Zones.

With ROSA private clusters with PrivateLink, Red Hat SRE teams no longer require the cluster to be internet facing to monitor or perform actions on behalf of the customer. Instead, a PrivateLink endpoint is created and linked to each of the private subnets in the VPC. 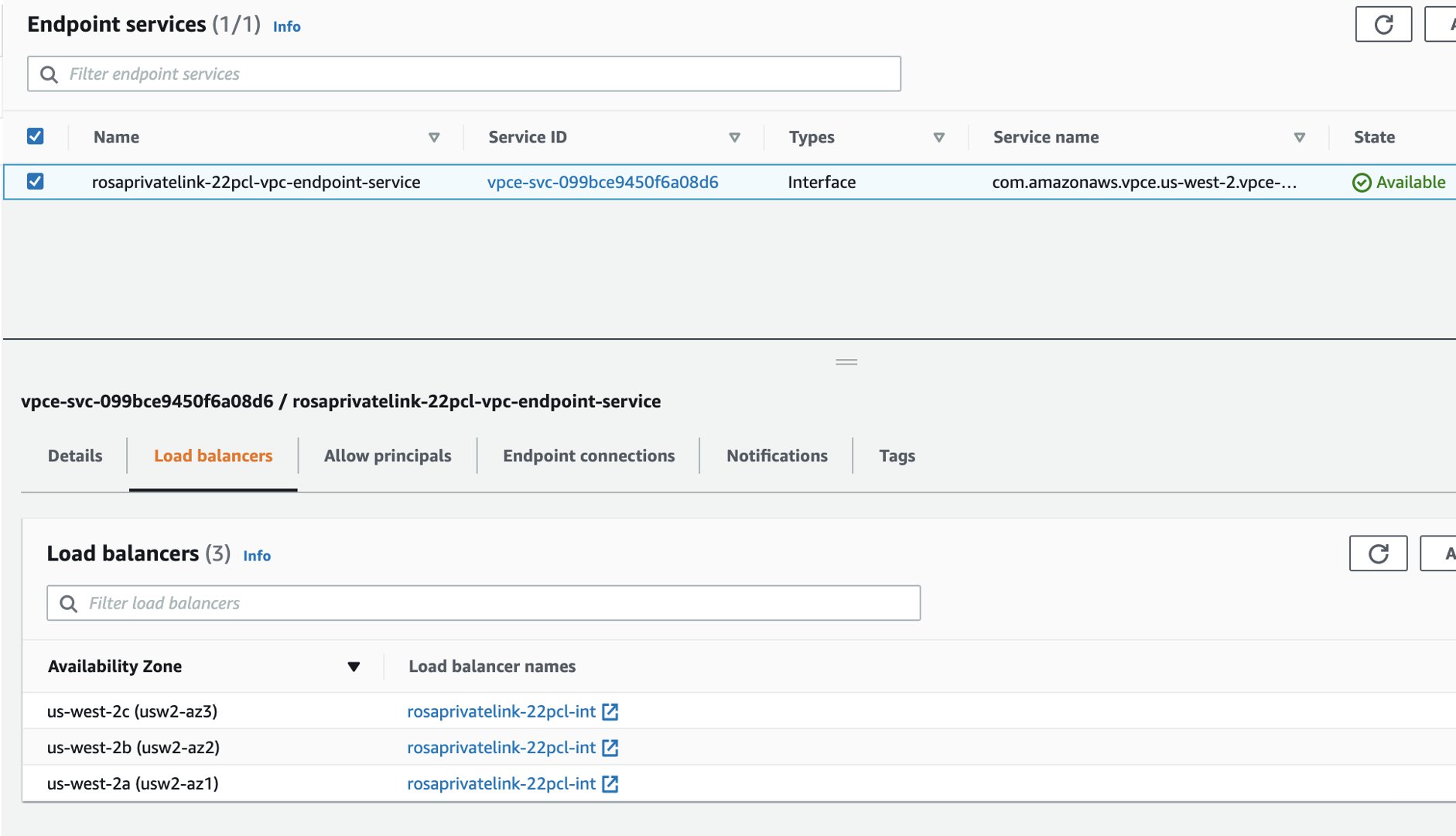 The PrivateLink connects to a VPC which Red Hat own and the SRE teams supporting and managing OpenShift. Should Red Hat SRE teams need to connect to the OpenShift web console or API, they will traverse the PrivateLink and connect to the AWS load balancers serving the OpenShift API and console. This reduces the number of AWS load balancers, as having an internal and internet facing load balancer is no longer a requirement. Now, there is only a Classic Load Balancer providing access to the application workloads running on OpenShift and a Network Load Balancer providing access to the OpenShift API and console endpoint. 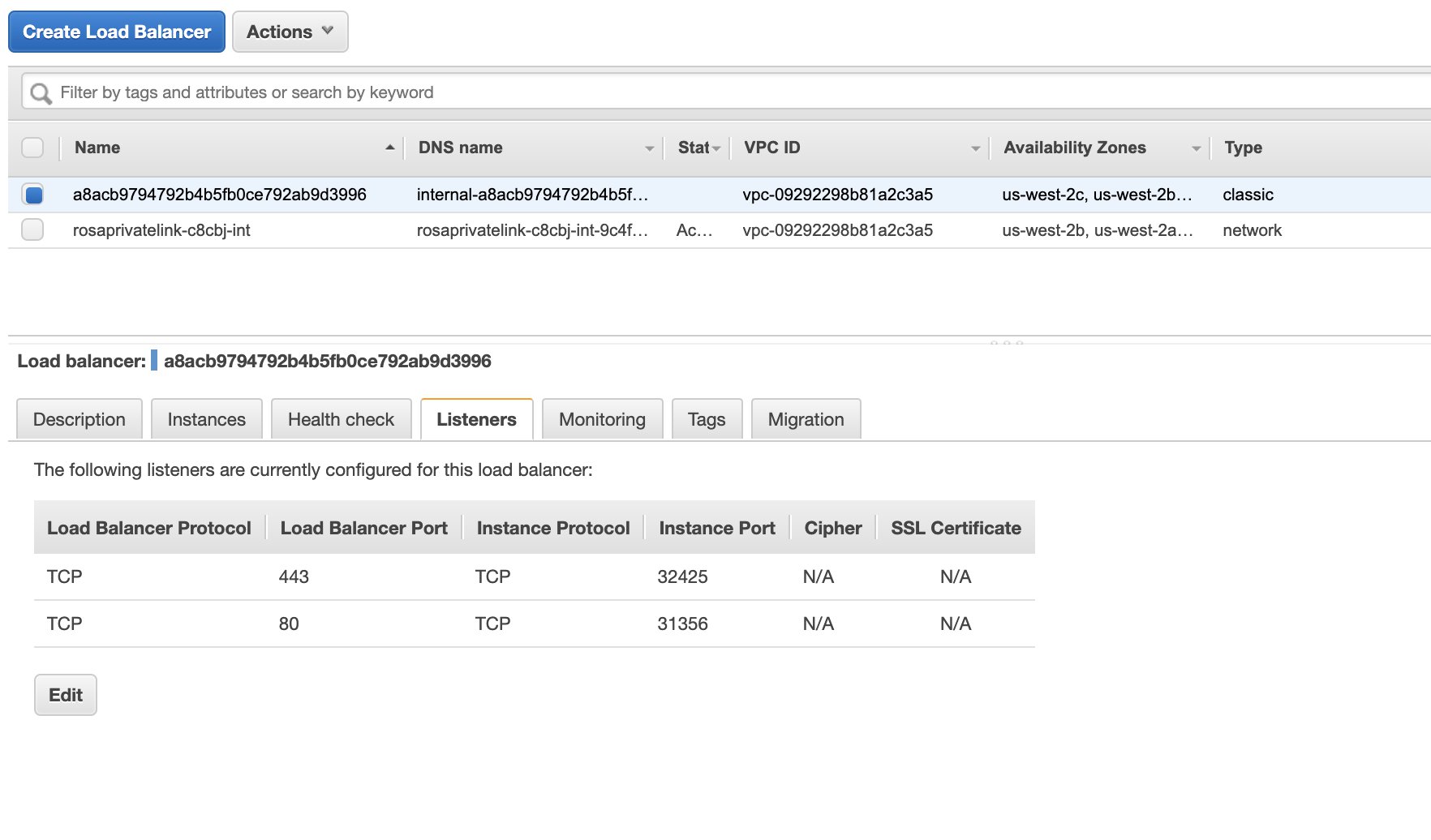 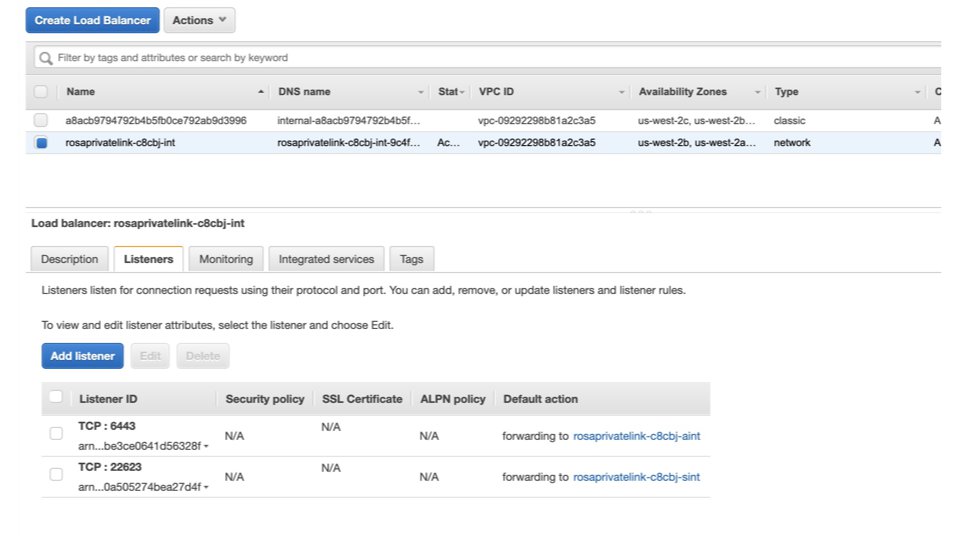 Customer use cases and VPCs for ROSA PrivateLink:

Customers looking for a managed OpenShift with a requirement for the OpenShift cluster and application workloads not to be exposed to the internet. There is no requirement for centralized egress. In this use case, customers can deploy a traditional VPC, which has public and private subnets, NAT gateways, internet gateways, etc. 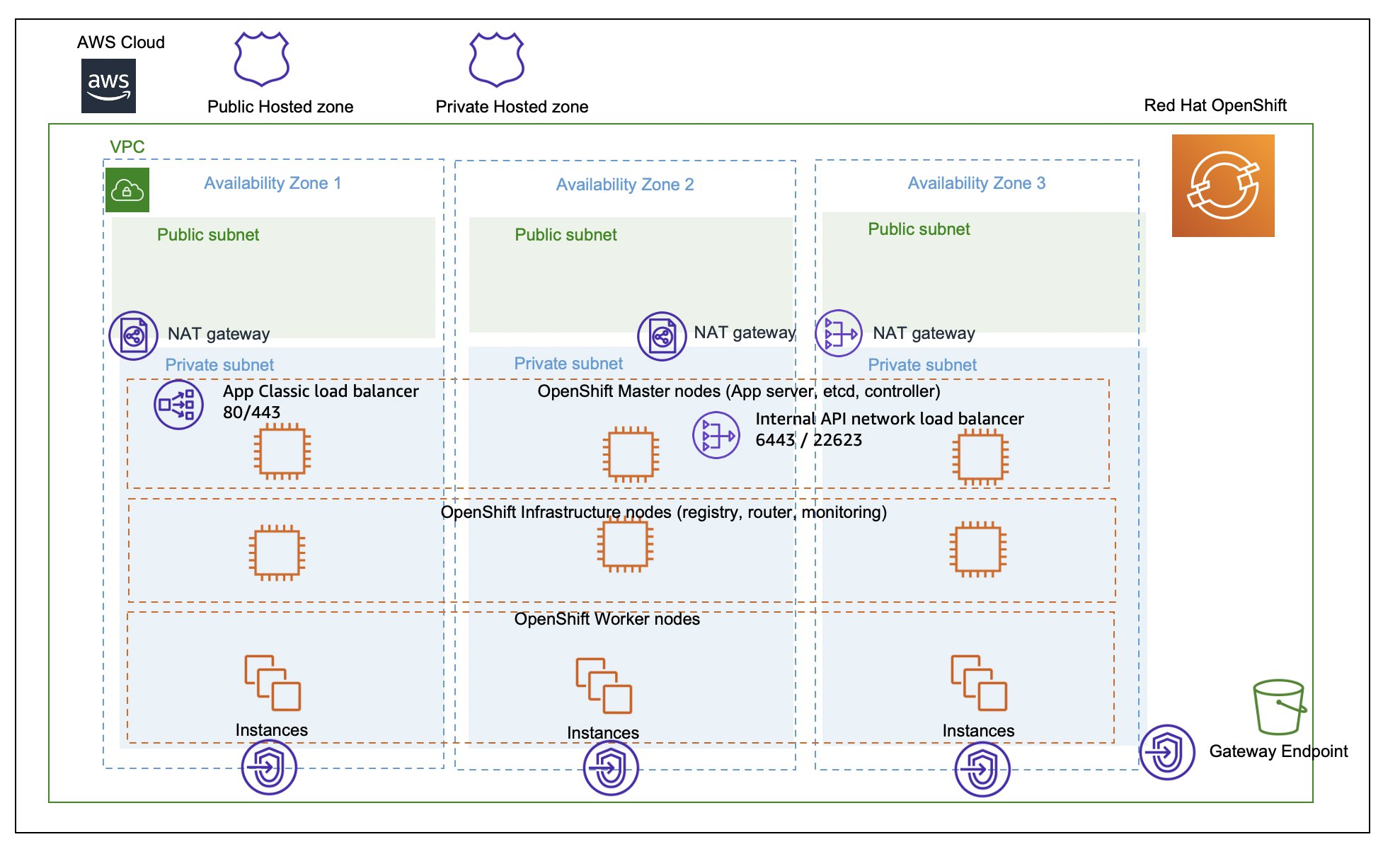 This can be deployed via the Launch VPC Wizard in the console, or using the Amazon Virtual Private Cloud (Amazon VPC) Quick Start if infrastructure as code AWS CloudFormation be preferred.

For customers that have strict networking and infrastructure policies, there may be the requirement for specific ingress and egress paths. This may result in VPCs needing to connect to other specific ingress and egress VPCs, or connect back to on premises. AWS provide a variety of connectivity options between VPCs and on-premises. The following whitepapers provide deeper insight into these:

We are going to focus on connecting ROSA VPCs to on premises or to egress VPCs using AWS Transit Gateway.

In this case, the VPC ROSA will be deployed into will only have private subnets and no internet gateway, instead, the VPC will use Transit Gateway to connect and route traffic to an egress point. 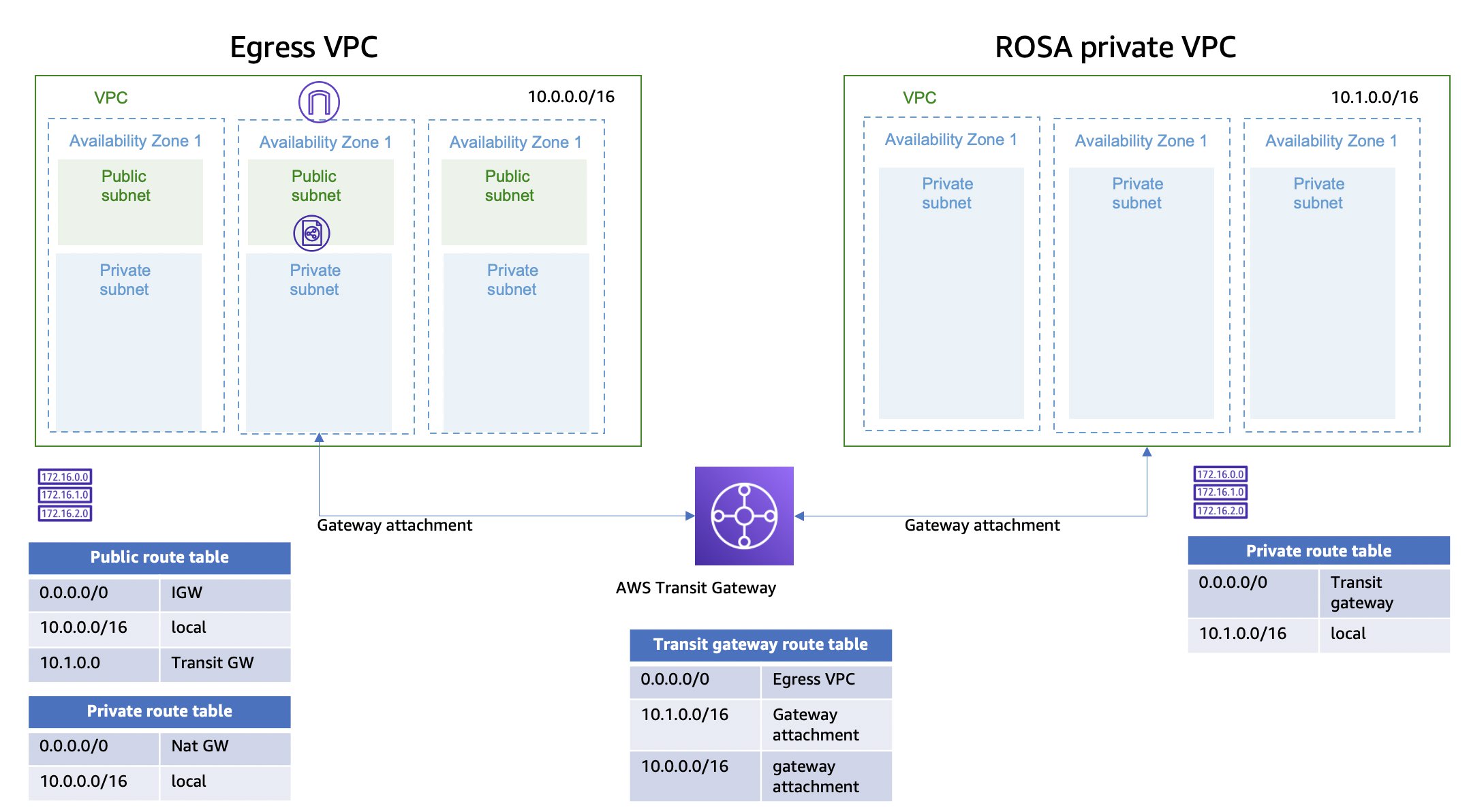 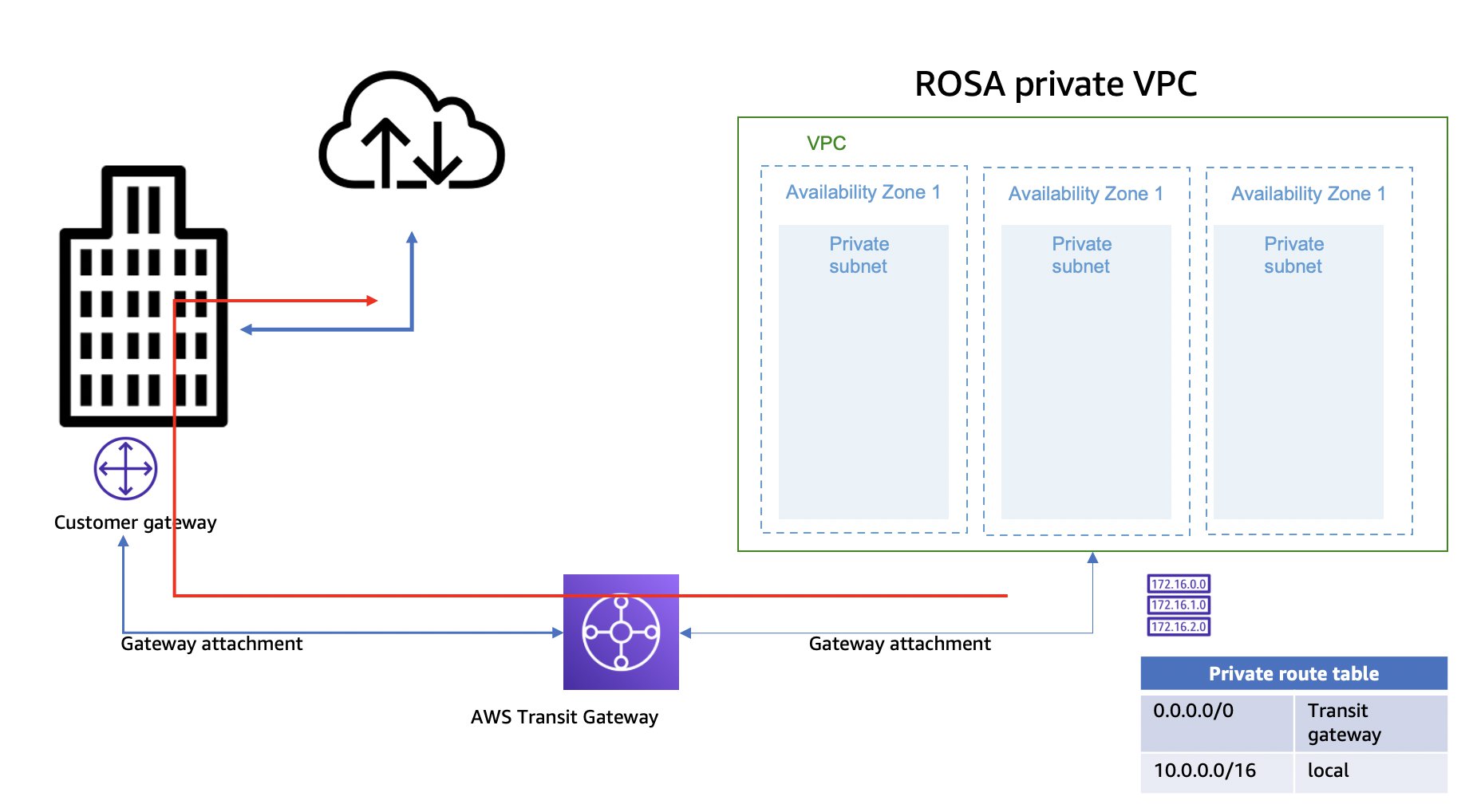 In both preceding cases, ROSA will be deployed into the private subnets. The ROSA install process needs to reach resources on the internet. The VPC structure must enable routing to the internet, as well as cater for name resolution. Prior to deployment, you should perform a careful inspection of route tables to ensure that return routing is in place. 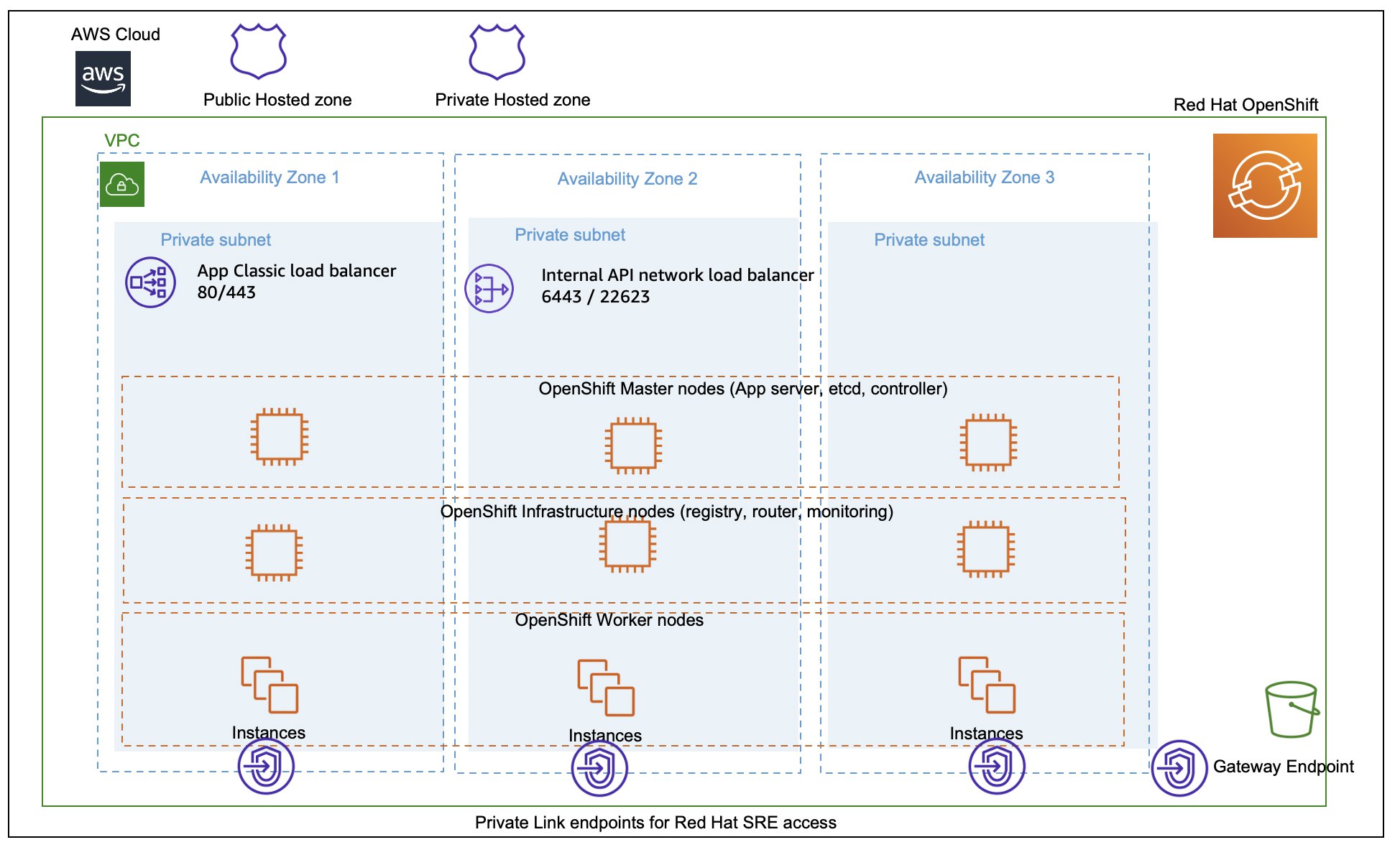 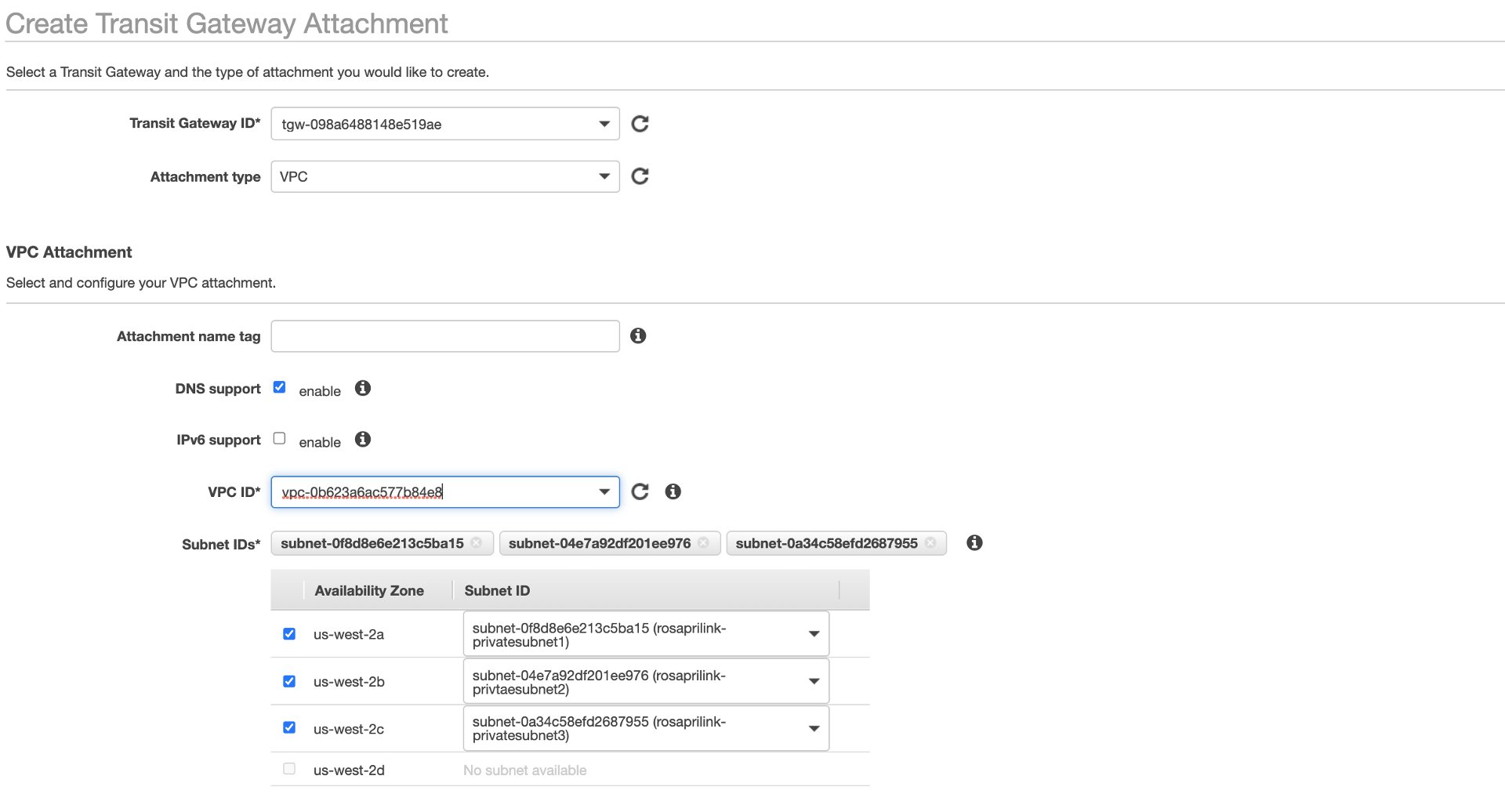 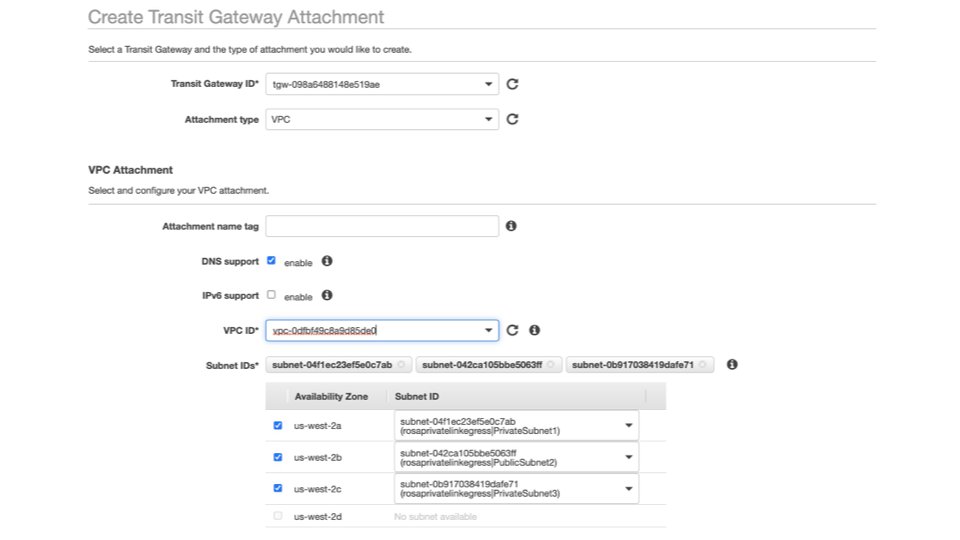 Once the attachments have been created, route tables must be updated to ensure that traffic can traverse the VPCs to the internet and back.

ROSA can then be deployed into the private subnets of the ROSA VPC.

Here are few checks and validations to avoid issues:

The majority of issues encountered originate from not having all the correct stakeholders aware of each other. Ensure application platform owners, networking teams, security teams, and cloud centers of excellence are included.

Red Hat OpenShift Service on AWS clusters with PrivateLink allows customers to deploy OpenShift clusters and application workloads without the need to expose systems to the internet. Red Hat SRE teams can connect to the clusters via PrivateLink connections and manage the clusters on behalf of customers. Customers can take advantage of a variety of options for implementation and automation.