AWS CodeBuild announced the launch of a new feature in CodeBuild called Reports. This feature allows you to view the reports generated by functional or integration tests. The reports can be in the JUnit XML or Cucumber JSON format. You can view metrics such as Pass Rate %, Test Run Duration, and number of Passed versus Failed/Error test cases in one location. Builders can use any testing frameworks as long as the reports are generated in the supported formats.

You can see the test reports created by CodeBuild in the respective Report Group, where they are stored for 30 days. For longer retention, you can store the reports in an Amazon S3 bucket. Each test report is further broken down by individual test cases.

Getting started with CodeBuild Reports

To store and view the reports of your unit tests, you need to add a new sequence configuration called reports in your buildspec.yml file. CodeBuild creates a new report group under this name or uses the existing report group if one exists already. The following sample buildspec.yml file generates test reports from JUnit tests using Surefire and stores it in the Report Group named <project-name>-SurefireReports, where <project-name> is the name of the CodeBuild project.

You can specify the unit tests in either the build or the post_build sequence in the buildspec.yml file.

CodeBuild needs additional AWS Identity and Access Management (IAM) permissions to create test reports. These permissions are already included in the predefined AWS managed policies used by CodeBuild. To add the permissions to the existing CodeBuild projects, you need to modify the policy. Use the following IAM policy to add permissions.

Once your unit tests start to execute as the part of CodeBuild project, you see the reports and the Trends for the report group along with the metrics. Reports also show the pass rate and average report duration as well as the time taken by each individual test.

Multiple CodeBuild projects can use the same report group. This feature is helpful if you test your code separately (such as for micro services and APIs) and want to see all of the reports in one place. Other examples include running integration tests across different projects and using one report group to view the results of the test.

Apart from the aggregates, you can see the metrics captured by each report separately. For each report, you can see the breakdown of individual unit tests, status of the tests, duration, and messages from the tests. The summary section shows you the overall Passed/Failed test count and pass rate along with the duration taken by each test/report, as shown in the following screenshot. 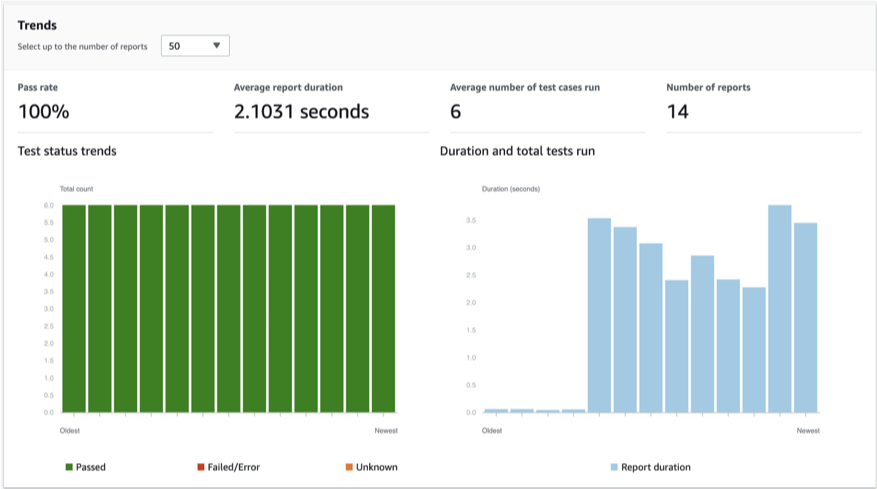 The blog post showed how to use Test Reports feature from CodeBuild. Developers can use this feature to see previously executed test results without leaving the AWS console. For teams that rely on Test Driven Development (TDD) techniques, test reports provide a valuable insights such as highlighting the number of tests with Passed, Failed/Error, or Unknown results.