Thank you to Michael Edge, Senior Cloud Architect, for a great blog on CodeCommit pull requests.

AWS CodeCommit is a fully managed service for securely hosting private Git repositories. CodeCommit now supports pull requests, which allows repository users to review, comment upon, and interactively iterate on code changes. Used as a collaboration tool between team members, pull requests help you to review potential changes to a CodeCommit repository before merging those changes into the repository. Each pull request goes through a simple lifecycle, as follows:

To make the comments more useful, sign in to the AWS Management Console as an AWS Identity and Access Management (IAM) user. The username will then be associated with the comment, indicating the owner of the comment. Pull request comments are a great quality improvement tool as they allow the entire development team visibility into what reviewers are looking for in the code. They also serve as a record of the discussion between team members at a point in time, and shouldn’t be deleted.

AWS CodeCommit is also introducing the ability to add comments to a commit, another useful collaboration feature that allows team members to discuss code changed as part of a commit. This helps you discuss changes made in a repository, including why the changes were made, whether further changes are necessary, or whether changes should be merged. As is the case with pull request comments, you can comment on an overall commit, on a file within a commit, or on a specific line or change within a file, and other repository users can respond to your comments. Comments are not restricted to commits, they can also be used to comment on the differences between two branches, or between two tags. Commit comments are separate from pull request comments, i.e. you will not see commit comments when reviewing a pull request – you will only see pull request comments.

Let’s get started by running through an example. We’ll take a typical pull request scenario and look at how we’d use CodeCommit and the AWS Management Console for each of the steps.

To try out this scenario, you’ll need:

The scenario below uses the us-east-2 region.

Sign in to the AWS CodeCommit console with the IAM user you want to use as the developer. You can use an existing repository or you can go ahead and create a new one. We won’t be merging any changes to the master branch of your repository, so it’s safe to use an existing repository for this example. You’ll find the Pull requests link has been added just above the Commits link (see Figure 1), and below Commits you’ll find the Branches link. Click Branches and create a new branch called ‘develop’, branched from the ‘master’ branch. Then create a new branch called ‘feature1’, branched from the ‘develop’ branch. You’ll end up with three branches, as you can see in Figure 2. (Your repository might contain other branches in addition to the three shown in the figure).

If you haven’t cloned your repo yet, go to the Code link in the CodeCommit console and click the Connect button. Follow the instructions to clone your repo (detailed instructions are here). Open a terminal or command line and paste the git clone command supplied in the Connect instructions for your repository. The example below shows cloning a repository named codecommit-demo:

If you’ve previously cloned the repo you’ll need to update your local repo with the branches you created. Open a terminal or command line and make sure you’re in the root directory of your repo, then run the following command:

You’ll see your new branches pulled down to your local repository.

You can also see your new branches by typing:

Now we’ll make a change to the ‘feature1’ branch. Open a terminal or command line and check out the feature1 branch by running the following command:

In the AWS CodeCommit console, click Pull requests. Click Create pull request. On the next page select ‘develop’ as the destination branch and ‘feature1’ as the source branch. Click Compare. CodeCommit will check for merge conflicts and highlight whether the branches can be automatically merged using the fast-forward option, or whether a manual merge is necessary. A pull request can be created in both situations.

After comparing the two branches, the CodeCommit console displays the information you’ll need in order to create the pull request. In the ‘Details’ section, the ‘Title’ for the pull request is mandatory, and you may optionally provide comments to your reviewers to explain the code change you have made and what you’d like them to review. In the ‘Notifications’ section, there is an option to set up notifications to notify subscribers of changes to your pull request. Notifications will be sent on creation of the pull request as well as for any pull request updates or comments. And finally, you can review the changes that make up this pull request. This includes both the individual commits (a pull request can contain one or more commits, available in the Commits tab) as well as the changes made to each file, i.e. the diff between the two branches referenced by the pull request, available in the Changes tab. After you have reviewed this information and added a title for your pull request, click the Create button. You will see a confirmation screen, as shown in Figure 4, indicating that your pull request has been successfully created, and can be merged without conflicts into the ‘develop’ branch.

Commenting on the pull request 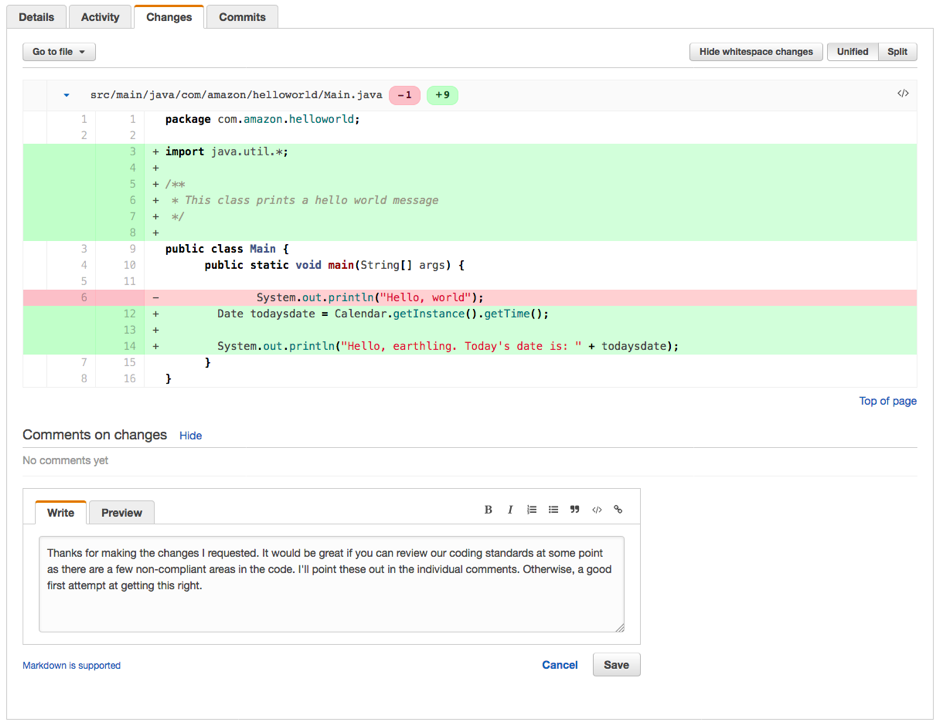 A specific file in the pull request
Hovering your mouse over a filename in the Changes tab will cause a blue ‘comments’ icon to appear to the left of the filename. Clicking the icon will allow you to enter comments specific to this file, as in the example in Figure 7. Go ahead and add comments for one of the files changed by the developer. Click the Save button to save your comment. 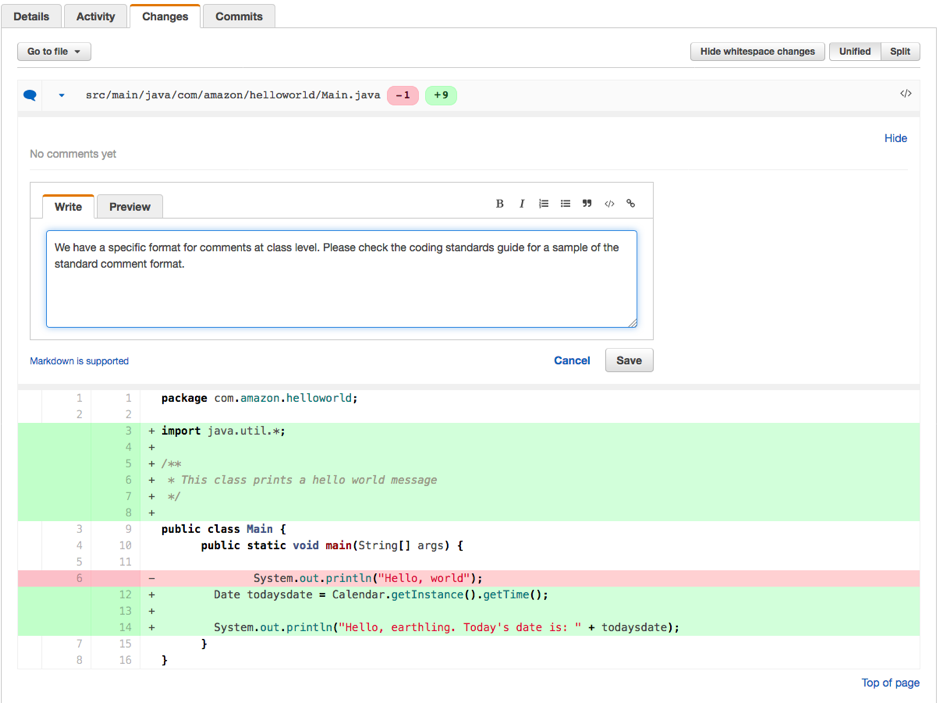 A specific line in a file in the pull request
A blue ‘comments’ icon will appear as you hover over individual lines within each file in the pull request, allowing you to create comments against lines that have been added, removed or are unchanged. In Figure 8, you add comments against a line that has been added to the source code, encouraging the developer to review the naming standards. Go ahead and add line comments for one of the files changed by the developer. Click the Save button to save your comment. 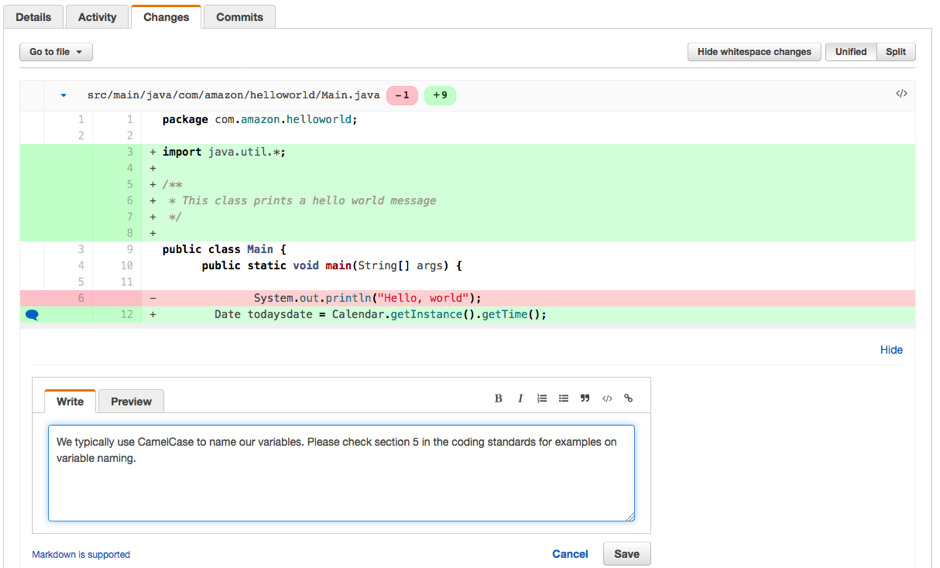 A pull request that has been commented at all three levels will look similar to Figure 9. The pull request comment is shown expanded in the ‘Comments on changes’ section, while the comments at file and line level are shown collapsed. A ‘comment’ icon indicates that comments exist at file and line level. Clicking the icon will expand and show the comment. Since you are expecting the developer to make further changes based on your comments, you won’t merge the pull request at this stage, but will leave it open awaiting feedback. Each comment you made results in a notification being sent to the developer, who can respond to the comments. This is great for remote working, where developers and team lead may be in different time zones. 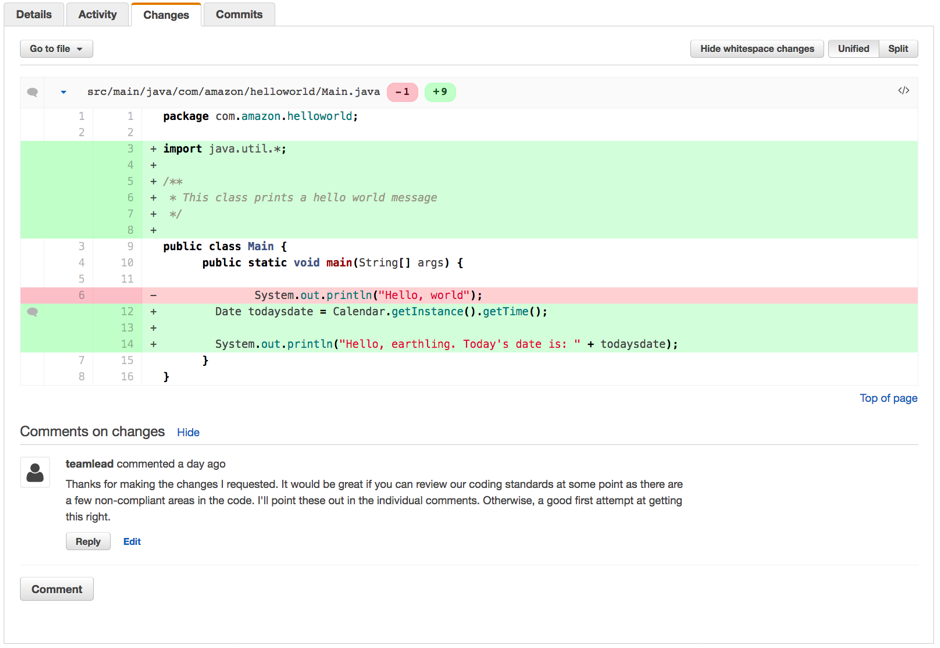 A typical development team is going to be creating pull requests on a regular basis. It’s highly likely that the team lead will merge other pull requests into the ‘develop’ branch while pull requests on feature branches are in the review stage. This may result in a change to the ‘Mergable’ status of a pull request. Let’s add this scenario into the mix and check out how a developer will handle this.

A developer reviewing the pull request would see the pull request now looks similar to Figure 10, with a ‘Resolve conflicts’ status rather than the ‘Mergable’ status it had previously (see Figure 5).

Once the team lead has completed his review, the developer will review the comments and make the suggested changes. As a developer, you’ll see the list of review comments made by the team lead in the pull request Activity tab, as shown in Figure 11. The Activity tab shows the history of the pull request, including commits and comments. You can reply to the review comments directly from the Activity tab, by clicking the Reply button, or you can do this from the Changes tab. The Changes tab shows the comments for the latest commit, as comments on previous commits may be associated with lines that have changed or been removed in the current commit. Comments for previous commits are available to view and reply to in the Activity tab.

In the Activity tab, use the shortcut link (which looks like this </>) to move quickly to the source code associated with the comment. In this example, you will make further changes to the source code to address the pull request review comments, so let’s go ahead and do this now. But first, you will need to resolve the ‘Resolve conflicts’ status. 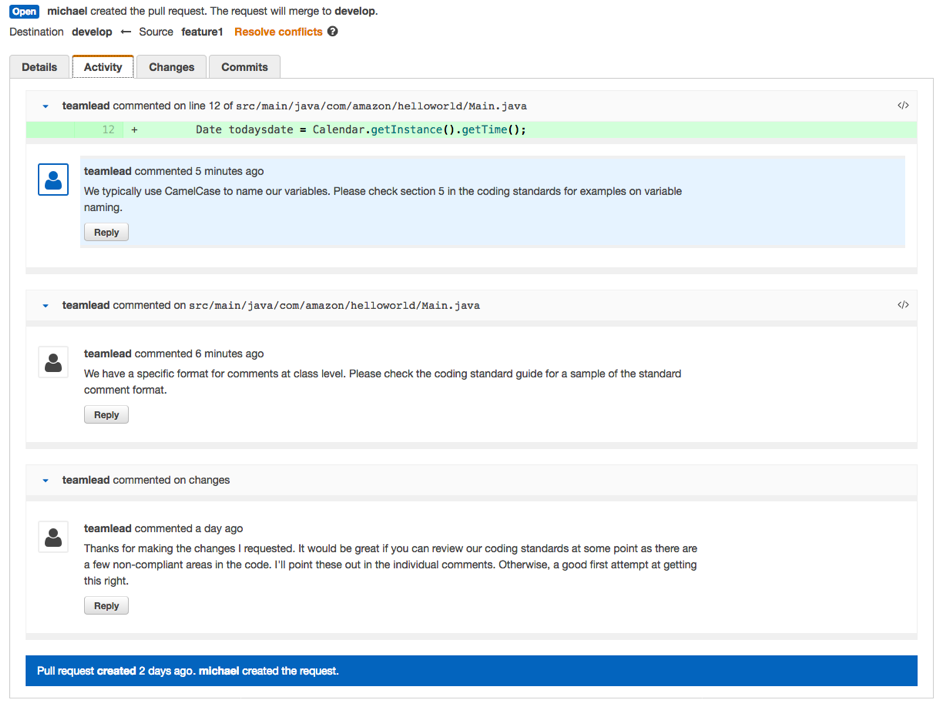 The ‘Resolve conflicts’ status indicates there is a merge conflict between the ‘develop’ branch and the ‘feature1’ branch. This will require manual intervention to restore the pull request back to the ‘Mergable’ state. We will resolve this conflict next.

Open a terminal or command line and check out the develop branch by running the following command:

Then checkout the ‘feature1’ branch:

Now merge the changes from the ‘develop’ branch into your ‘feature1’ branch:

Yes, this fails. The file Main.java has been changed in both branches, resulting in a merge conflict that can’t be resolved automatically. However, Main.java will now contain markers that indicate where the conflicting code is, and you can use these to resolve the issues manually. Edit Main.java using your favorite IDE, and you’ll see it looks something like this:

The code between HEAD and ‘===’ is the code the developer added in the ‘feature1’ branch (HEAD represents ‘feature1’ because this is the current checked out branch). The code between ‘===’ and ‘>>> develop’ is the code added to the ‘develop’ branch by the team lead. We’ll resolve the conflict by manually merging both changes, resulting in an updated Main.java:

After saving the change you can add and commit it to your local repo:

Fixing issues raised by the reviewer

After saving the changes, commit and push to the CodeCommit ‘feature1’ branch as you did previously:

Responding to the reviewer

Now that you’ve fixed the code issues you will want to respond to the review comments. In the AWS CodeCommit console, check that your latest commit appears in the pull request Commits tab. You now have a pull request consisting of more than one commit. The pull request in Figure 12 has four commits, which originated from the following activities:

Let’s reply to the review comments provided by the team lead. In the Activity tab, reply to the pull request comment and save it, as shown in Figure 13. 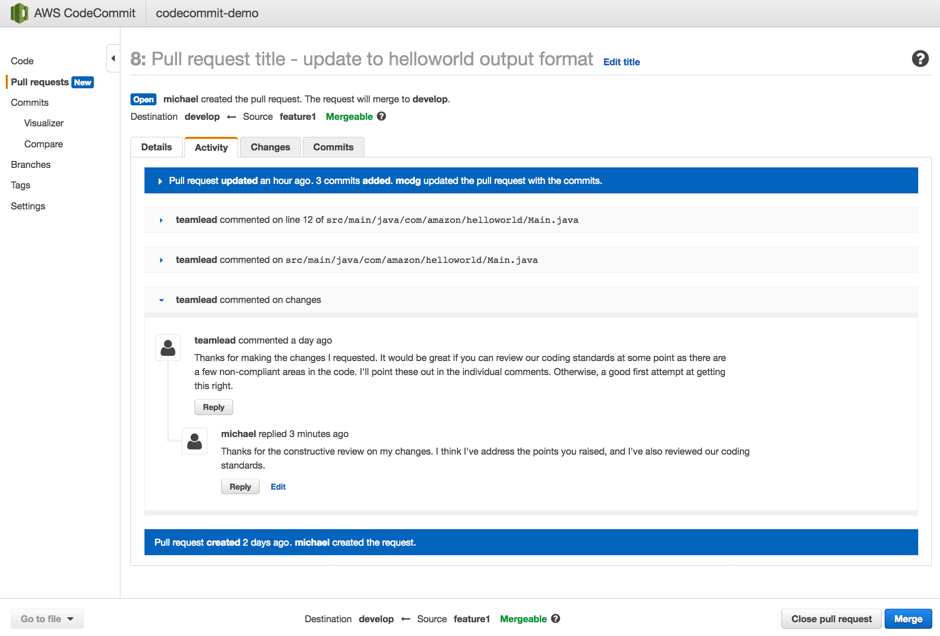 At this stage, your code has been committed and you’ve updated your pull request comments, so you are ready for a final review by the team lead. 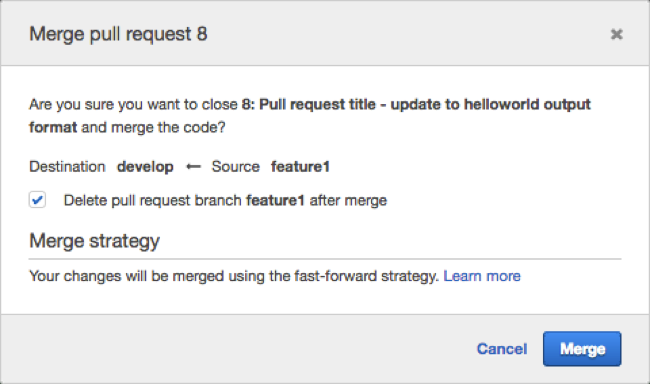 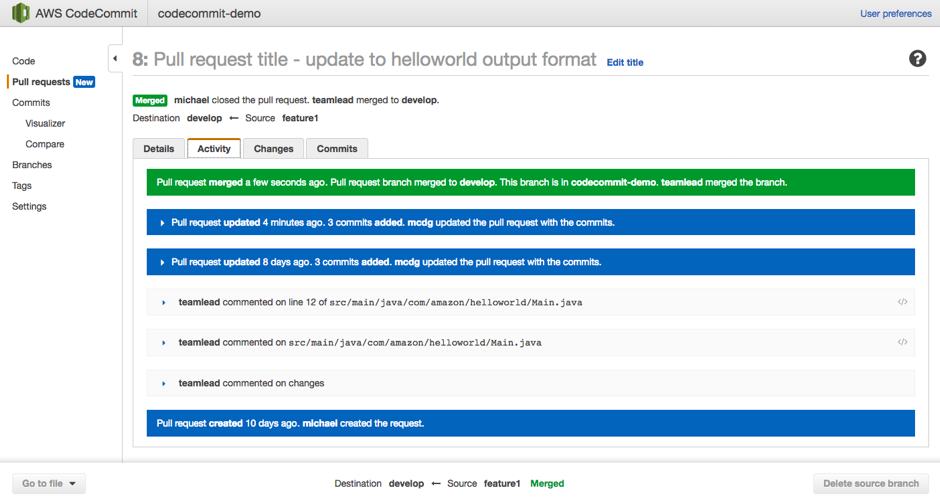 This blog has demonstrated how pull requests can be used to request a code review, and enable reviewers to get a comprehensive summary of what is changing, provide feedback to the author, and merge the code into production. For more information on pull requests, see the documentation.