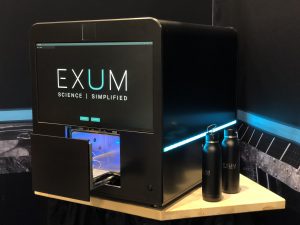 “What is this made of?!” is a key question through the energy industry.

Geologists frequently need to determine the elemental composition of cores and cuttings to better understand reservoir deposition and behavior. Producing defect-free metals is of critical importance during drilling and production, where material quality assurances are needed for safe and secure operations. Renewable energy companies also need to ensure that feedstocks into manufacturing processes are defect-free.

Solid-phase characterization data is one of the most important pieces of safely producing energy. However, the tools to characterize samples haven’t evolved much in the past few decades. It was during his PhD work that Jeff Williams, Founder and CEO of Exum Instruments, realized that he was not alone struggling with mass spectrometry tools “I was surprised that almost everyone had the same point of view… The tools were dated, hard to use, expensive, and so big that they filled entire labs.” That realization led to the birth of Exum Instruments.

Based in Denver, CO, Exum Instruments brings solid sample characterization to solve problems across various industries, including energy. Exum builds instruments and software ecosystems to increase the speed of development and discovery, offering easy access to high-performing instruments coupled with the flexibility and scalability of a cloud-based software platform.

I recently spoke to Jeff who has built a better mass spectrometry tool since he left his PhD program to become a full-time entrepreneur. Exum’s first instrument, the Massbox, is the first commercial instrument equipped with a Laser Ablation Laser Ionization (LALI) source.

LALI works through a dual-laser technology that first extracts then ionizes the material in two steps. First, a focused laser beam is used to ablate/desorb material from a solid sample surface. Next, another laser focuses its beam into the particle cloud and ionizes neutrals. These ions are then channeled into a low-pressure environment that is then focused and separated for elemental analysis. The result is an analysis with high fidelity and sensitivity that can be used for analysis of both organics and inorganics of samples with use cases ranging from crude oil to manufacturing samples and even extra-planetary missions.

What is the one thing you want people to know about Exum?

“While the Massbox is aggressively advanced, it’s very simple to use.

Most of the research regarding LALI was purely academic and was performed prior to the early 1990s, when cost and electronic limitations prohibited commercialization of LALI technology. However, recent advances in computing technology and miniaturized, high-powered, solid-state lasers make LALI much more commercially viable today.

The interface has been adopted from the mobile market, including a touch screen and intuitive user interface that anyone can use to complete their analysis. The collected data is sent directly to the AWS Cloud, which helps the ease of customer use. Building on AWS, we’ve been able to use many of the AWS services and features to create a scalable platform to allow the user to process any data collected on Exum’s Instruments from anywhere in the world.”

When did you first know your company was a success?

The first time I knew it was a successful idea was when I made the first figure from data that had been made from this frankensteined, hodgepodge of mismatched lab equipment. Up until that point, we knew the physics and math worked, and that this technique was viable.

However, prior to seeing that proof we didn’t know what, exactly, the outcome would be. Looking at the first figure, I know I’d spent those years of my life toward something that would positively impact many different industries around the world…that was an immense feeling.

What trends are you seeing in your industry and sector?

Companies are finally starting to wake up to the fact that scientists and professionals are people too. Many companies believe that this market does not need the same focus on UI/UX, aesthetics, ease of use, and general “got to have it” feel. It has long been the thought that if the instrument works well, the customer will be happy and will deal with what ever excuse for a UI/UX they give them. Despite this trend, we are seeing the effects of legacy software and hardware making this transition for the major players very difficult.  That is definitely the advantage that Exum has here, we have new technology and essentially a blank canvas to ask, “what is the easiest way to interact with our instrument, and the fastest way to get data?”

This is at the core of what Exum is building here so it is always nice to hear from customers, like the call I got off last week:

“I feel like you guys are making what everyone has wanted for years, an easy to use instrument I can use for many different applications in my lab without 3 instruments 6 computers and 10 software packages. “

Liz Dennett is a Sr. Partner Solutions Architect at AWS where she works with Energy partners to build and launch cloud-based solutions. Liz brings over a decade of energy industry experience including a MS and PHD in Geoscience, and previous work at Hess Corporation, Biota Technology, and the NASA Astrobiology Institute.