Defender metrics visualization in the AWS management console makes it possible for you to view metrics generated by devices that belong to a security profile as statistical aggregations.

Configurable alerting means you can configure, per device, the number of consecutive violations after which an alert is triggered.

Let’s review the process of setting up in this use case. These ID card scanners have the following characteristics:

In this scenario, my objective is monitor the security of these ID card scanners and receive an alert if a security incident takes place.

Let’s start by breaking down a security incident. A malicious attacker (for example, someone behind a DDoS botnet or spam email campaign) must establish a communication channel to the IoT device, on which the malware and commands would be sent to the device.

The following are some metrics that can be captured that can help identify this security incident:

For the purpose of this demo, I will configure thresholds for the outgoing bytes metric, Bytes out.

I will begin by creating a security profile for these ID card scanners and collecting the metrics I’m interested in. 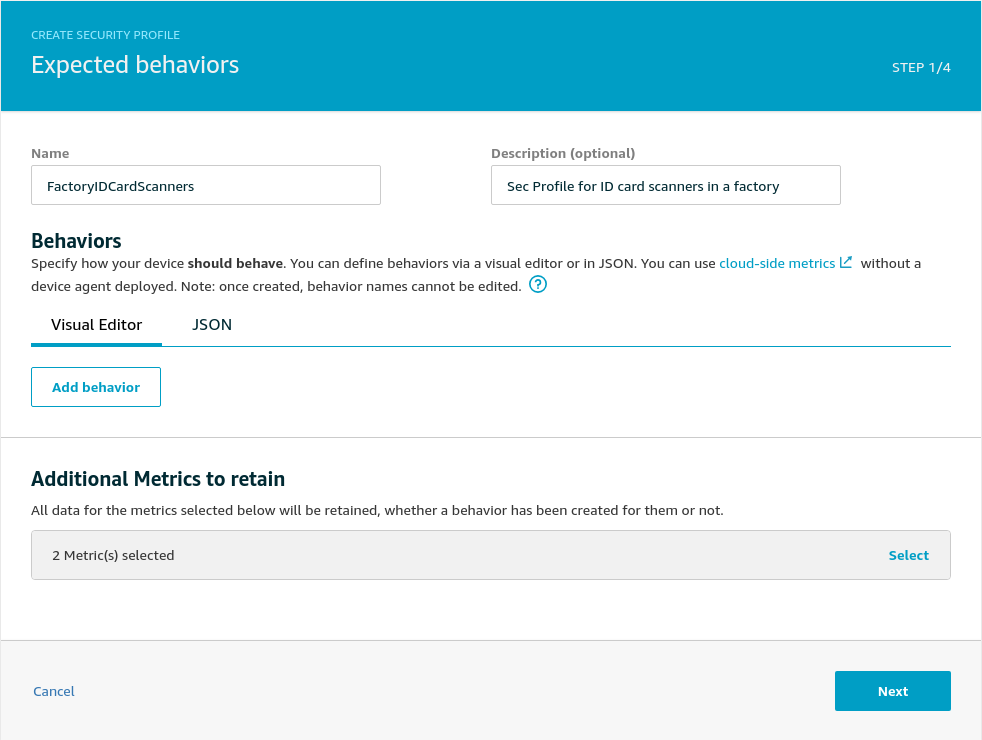 On the Expected behaviors page of the AWS IoT console, I enter a name and description for the security profile, and then choose Next.

Setting up of behaviors used to be a required part of creating a security profile. Now you can simply choose to retain the metrics you are interested in and configure the thresholds later.
For the purpose of this demo, I will not set up any alert target in this security profile: 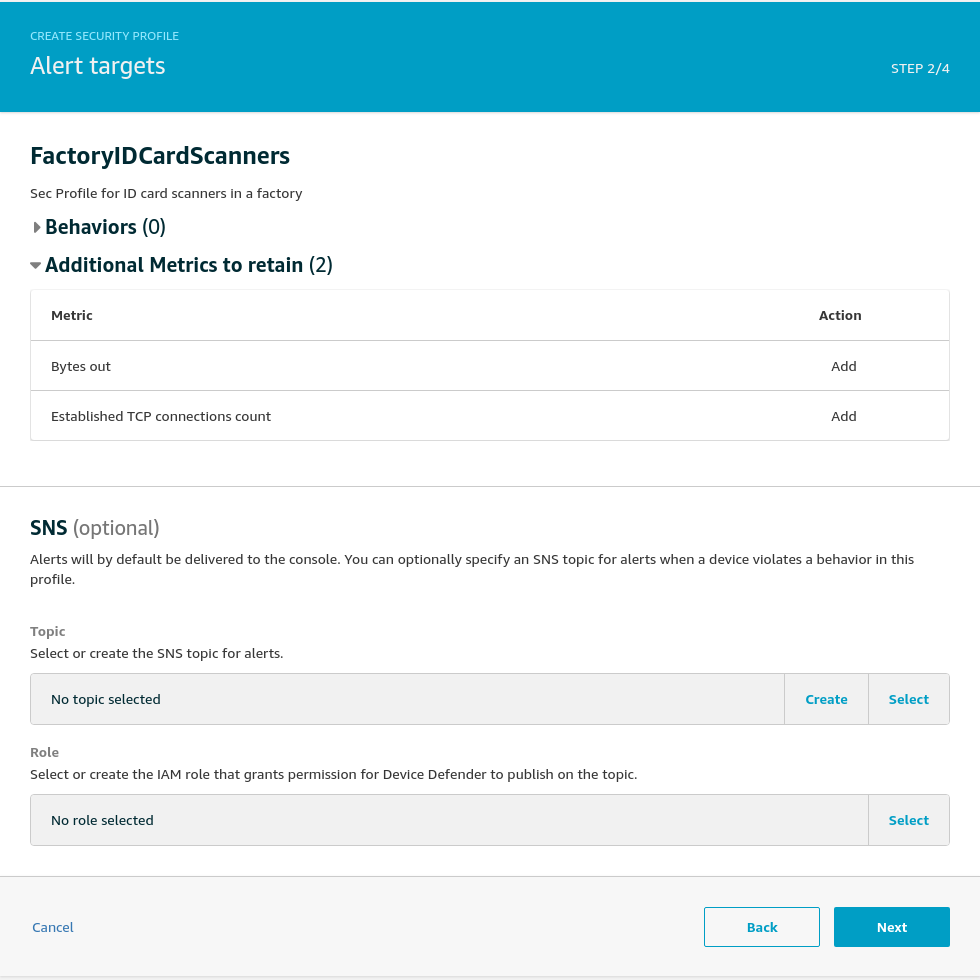 Next, I will attach the security profile to the appropriate thing group (FactoryIDCardScanner_ThingGroup) and then choose Save. 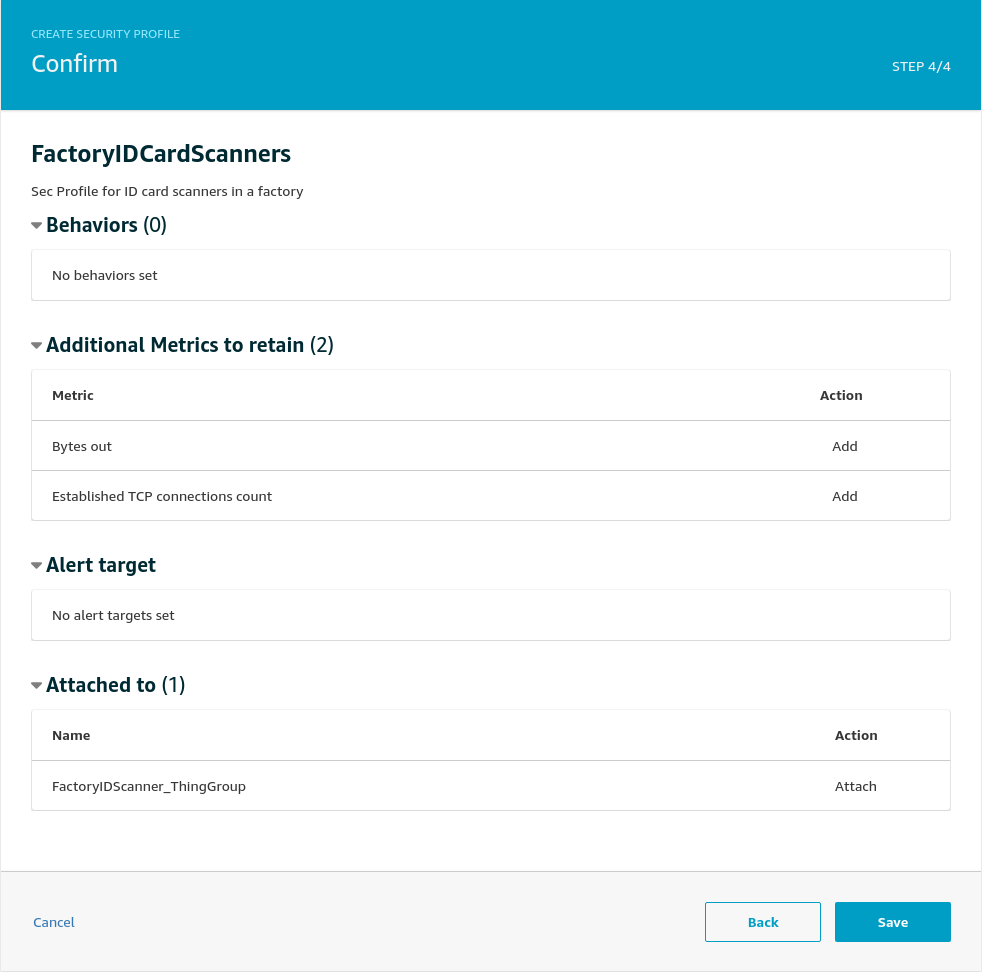 When the security profile confirmation page is displayed, the process is complete. 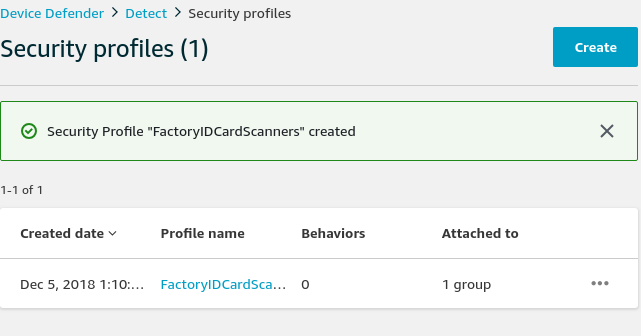 Let’s assume that I collect a sufficient amount of metrics from these ID card scanners. Now let’s take a look at how the new features in AWS IoT Device Defender Detect help me configure appropriate thresholds for my security profile.

The Defender metrics allow me to visualize metrics generated by all devices in a security profile as statistical aggregations in the AWS IoT management console. This visualization appears on the dashboard for my security profile. Let’s see the p0 (minimum value) and p100 (maximum value) values for the Bytes out metric. (Here “p” refers to percentiles.) 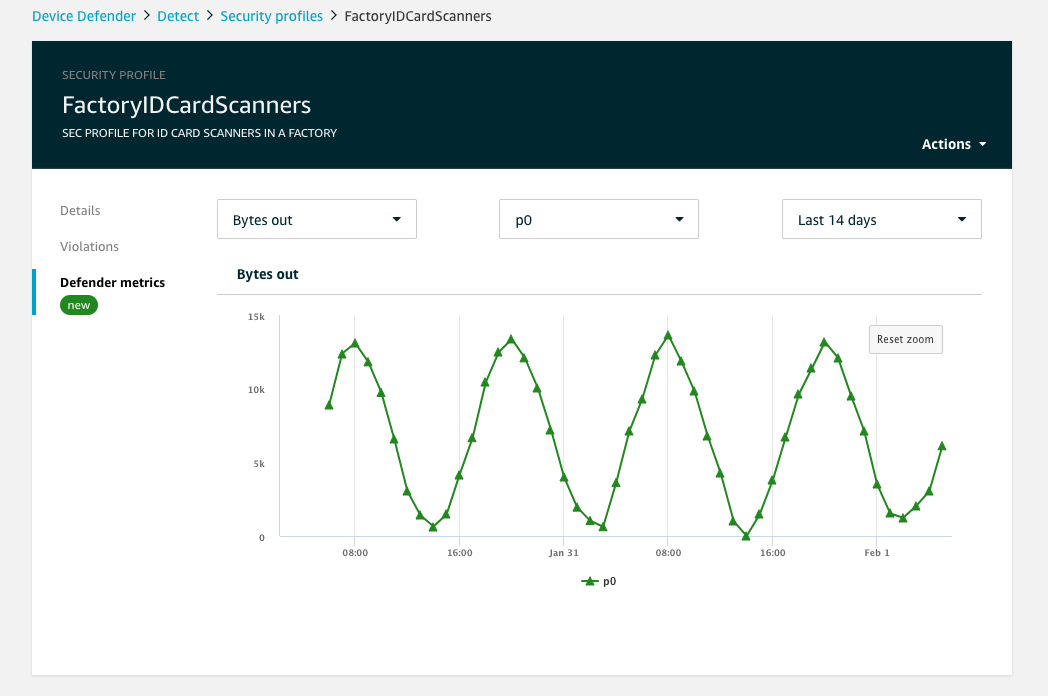 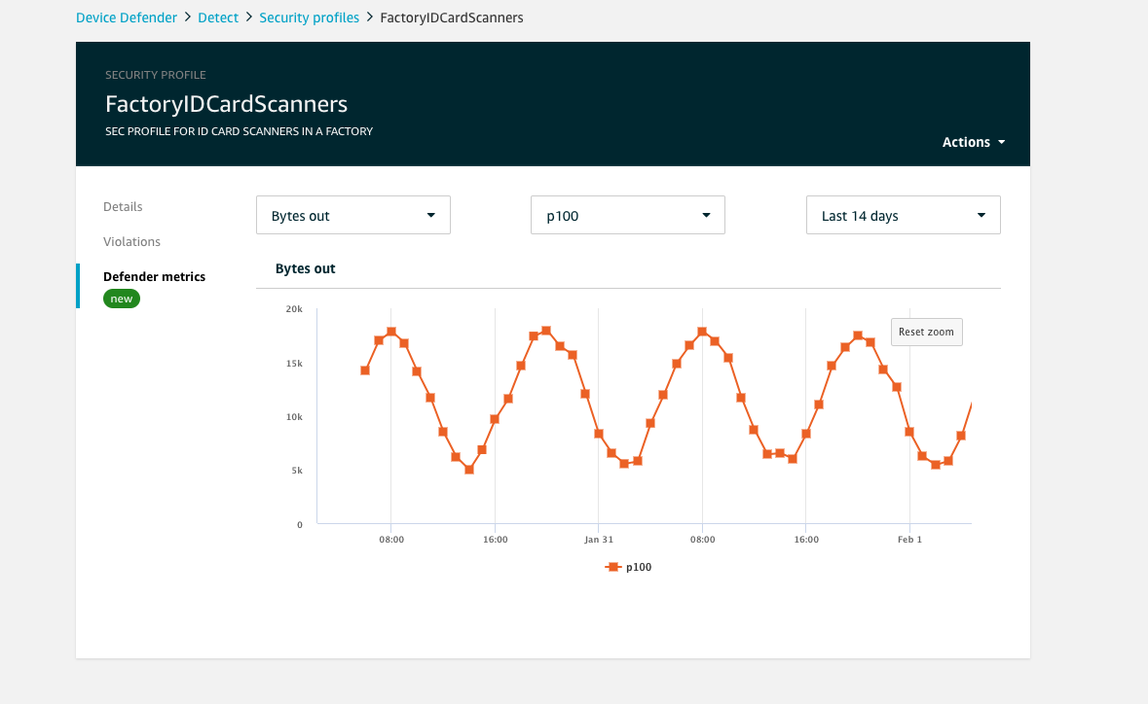 Note: Data is available for visualization as soon as it is received by AWS IoT Device Defender. Data is stored for a rolling window of 14 days. Customers don’t need to wait 14 days for visualizations to be populated.

By analyzing these graphs, I can make the following observations, which were unknown to me until now:

Because there is variance in the metrics, it would be insufficient to say that Bytes out should be less than 17.5 kB (a static rule) because the baseline behavior for these devices is changing at each time interval. For situations like this, I would use statistical anomaly detection. 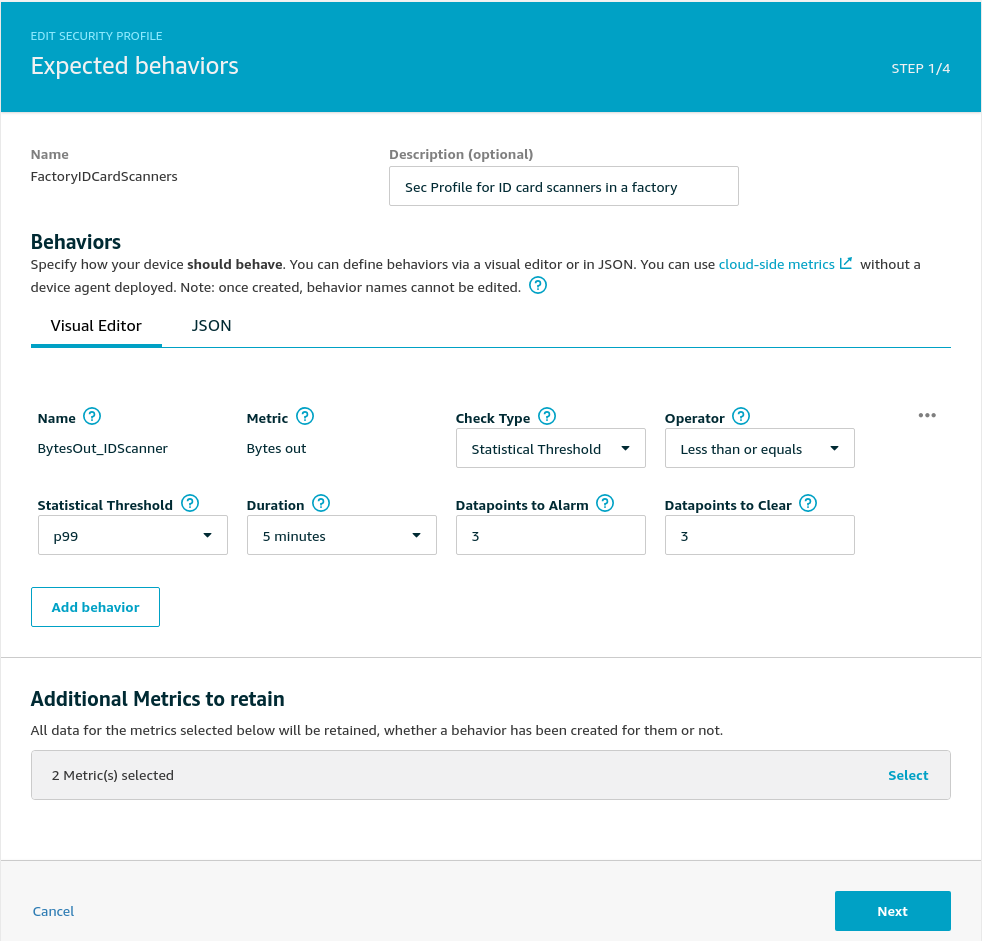 The following shows the threshold in the security profile was successfully updated.

Anomalous behavior can be a result of a transient error, such as a temporary network outage. Alerts raised in response to such errors are false. To make anomaly detection more robust, I can configure AWS IoT Device Defender Detect to generate an alert only if a device has been in violation of the thresholds for a specified number of continuous time intervals.

It is important to emphasize that this configuration is a trade off between false and legitimate security alerts. For example, if the security incident were to last only for one time period, and if AWS IoT Device Defender Detect is configured to generate an alert only after two consecutive violations, the security incident will be missed and the appropriate alert action will not be taken.

To set up configurable alerting, on the Expected behaviors page, I would have to update values for the following:

When an alarm occurs, I want to investigate the behavior of the device. The following view is available on the Defender metrics for that device. It provides me with access to the raw values. 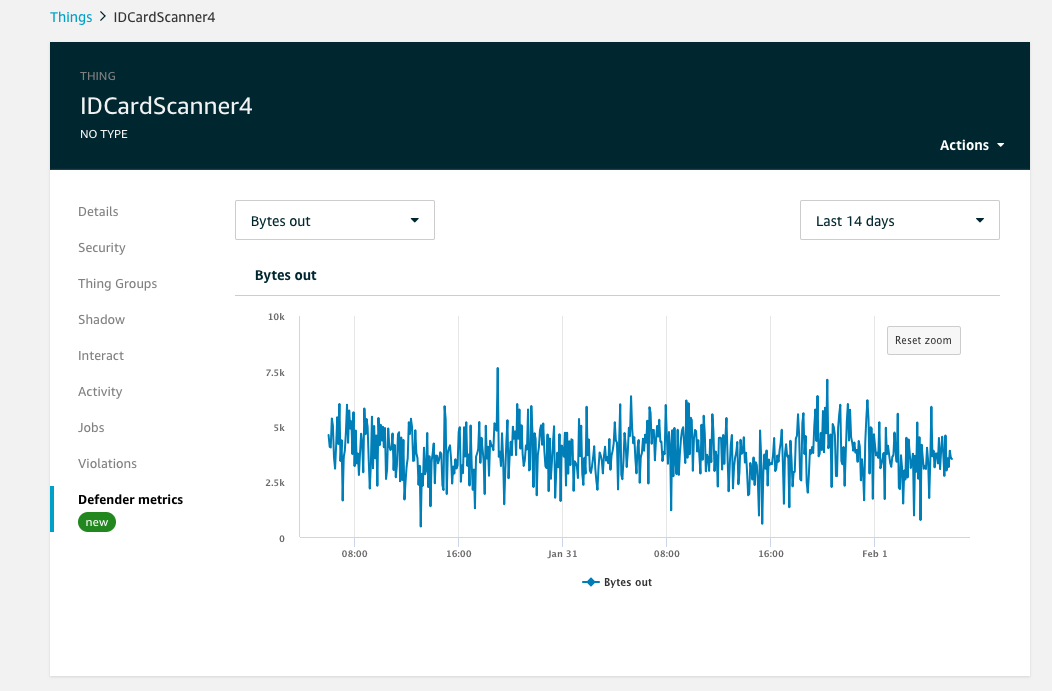 Note: Metrics discussed in this blog post can only be observed from the device. To capture these metrics, customers must send them to AWS IoT Device Defender. (Sample implementation is provided here.)